Call in the Bomb Squad!

The offices of Northwest Prime Time 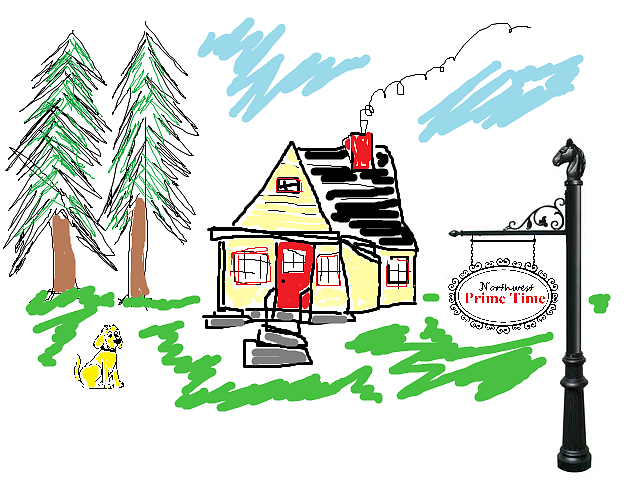 ...by Michelle Roedell, Editor, Northwest Prime Time
When Chris Mitchell first started working for Northwest Prime Time Journal back in 1994, it was owned by Neil and Jenny Strother. The Strothers lived in a beautiful Kirkland home and had beautiful offices just up the hill from the downtown core of that charming Lake Washington community.

After the Strothers sold the successful senior publication to a national company that promptly went bankrupt, Chris and I struck out to publish our own version of Northwest Prime Time. The year was 1999, and we had recently purchased our first humble home in a humble corner of the humble town of Tukwila.

In accordance with our humble budget, we opted to run the new business at home rather than renting an office. After all, it was just the two of us and we didn’t need the extra space or extra expense. Plus, both of us preferred to work at home with our myriad of pets running (and flying) around.

While I loved the countrylike setting of our house, which sat on a quiet, dead-end road surrounded by fields and forest, the house itself was rather ramshackle. We thought we’d fix it up, but soon realized that we had neither the skills for home projects nor did we (or our pets) want to live in the middle of a construction zone. And so, our rather shoddy-looking house became the official offices of Northwest Prime Time.

Sometimes we’d catch sight of cars with white haired folks driving slowly up and down that short, dead-end street, craning their necks to peer with confusion at the building located at 13425 42nd Avenue South. I realized that some of our readers hoped to drop by their favorite King County senior publication (the only King County senior publication at that time). When they saw the house, after a few minutes of confusion, they always sped away.

We soldiered on, working and living on that dead-end road, going about the business of learning how to publish a senior newspaper. A monthly periodical does not cover breaking news and early on I decided to emulate (in our extremely humble way) the model set forth by CBS’ Sunday Morning television program, with its genteel looks at human interest stories, interviews, self-reflective and humorous essays, interesting bits and pieces…with just a bit of news, some resources and helpful information thrown into the mix. We even started publishing columnist Roger Urbaniak’s GREAT OUTDOORS column on the last page, a nod to Sunday Morning’s NATURE segment that wraps up their final minute. While we often took a sobering look at the realities of growing older, we avoided politics, religion and any controversial topics.

Imagine my surprise when an anonymous reader started calling to vent his rage in reaction to an article about a local man who had been involved in saving lives at the end of WWII. He called time and time again and I finally stopped answering the phone. But he continued to call, leaving ominous messages on our voice mail. (This was back before the days of caller ID.)

Keep in mind that the year was 2001, during the time that anthrax-laced letters were mailed to news media and politicians’ offices, killing five people and infecting 17 others. The word was out… be wary of suspicious mail and packages.

Then a suspicious package showed up on our doorstep. The brown paper-wrapped box was mailed to Chris from a California address we did not recognize. My mind went into overdrive. THIS was the definition of a  suspicious package, especially in light of the nerve-wracking phone calls we’d been receiving from that anonymous reader.

I gingerly carried the parcel out to a shed in our “back 40” and called in the bomb squad.

I don’t think the Tukwila police department took the threat very seriously. The “bomb squad” responded, but it consisted of a portly, older policeman with jovial smile. He was not frightened in the least and boldly followed me to the shed, where I pointed at the package from a safe distance.

The policeman quickly opened the package. To cut to the chase, inside was an American flag!

As it turned out, a California relative of Chris’ asked his Congresswoman to fly the flag over the United States Capitol on Chris’ birthday. It came as a surprise that showed up on our front porch months later.

The policeman had a good laugh about the whole situation, and I’m sure he used the story for comedic effect back at the station.

The angry man stopped calling. Within a couple of years, we left the original Northwest Prime Time offices behind, along with our humble home in Tukwila, and moved into a nicer place in Des Moines.