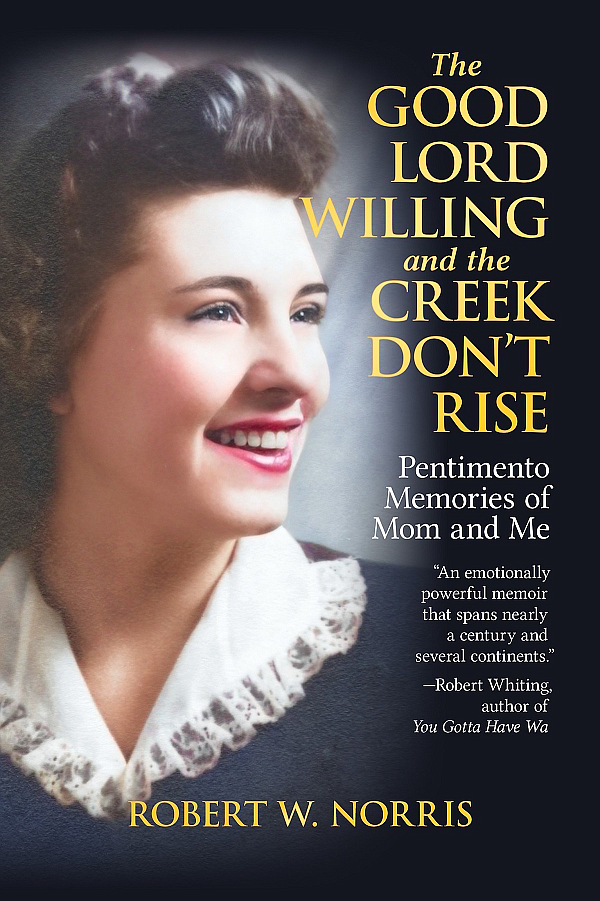 Robert Norris’ new memoir starts with his mother: Family was everything to Mom, he writes.

This sweeping true-life tale spans nearly one hundred years and begins long before Norris was born. His book, The Good Lord Willing and the Creek Don't Rise: Pentimento Memories of Mom and Me, explores his own life alongside his mother’s time on earth. 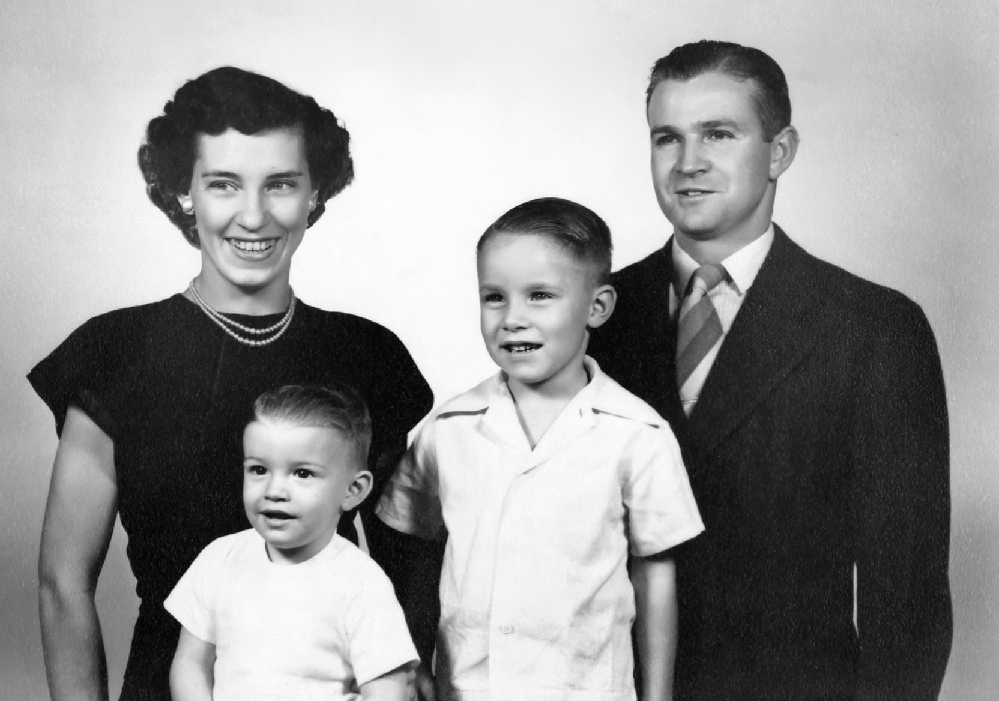 Robert Norris as a kid with his family:
(the author with his family in 1952,
he is the child on the left)
Her childhood memories in a small town by the Columbia River come alive through the stories he tells. His grandparents and his mom’s Grandad Frederick become larger than life characters, showing how his mother’s loving nature, strength, moral character, perseverance, fortitude, stubbornness, pride, and mischievous sense of humor were born.

By any reckoning, Norris’ mother, Catherine Caroline Murphy Schlinkman, was a memorable woman. Her obituary outlined some of the basics: A world traveler who enjoyed music, painting, golf, writing, and dancing. Although she spent most of her career as a legal secretary, she was also a roller-skating instructor, got a pilot’s license and flew fire patrol for the forest department. She traced her family’s roots in Ireland and began studying the Japanese language in her 60s.

But these facts didn’t capture his mother’s spirit for Norris. She was so much more than that. In many ways, Mom’s life is the story of a remarkable American woman, a fighter, and a survivor of the time in which she lived. As a child, her experience of traveling across the United States with her family in the early days of the Great Depression was not unlike that of the Joad family in Steinbeck’s The Grapes of Wrath. Being ostracized by a small logging community in the late 1950s for her divorce and later being kicked out of the Catholic Church when she remarried were symbolic experiences. When I became a conscientious objector, refused my order to fight in the Vietnam War, got court-martialed, and spent time in a military prison, Mom bravely defended me against patriotic and conservative friends, colleagues, neighbors, and family members who considered me a coward and a traitor. This courage also exemplified her life, he writes.

She once wrote to her son: “I know when I had you three children, my main purpose in life was to raise you to be free spirits, independent, adventuresome, self-confident, and perhaps most of all to be very self-sufficient.” Her love was true, writes Norris. He describes her  hugs as strongest and best in the world.

Norris views his mother as a feminist ahead of her time who fought against sexual harassment in the home and workplace. After her first divorce, she mowed lawns, cleaned houses, and did others’ laundry to feed her children. After her second divorce, in addition to her main day job as a legal secretary, she took on two part-time jobs to pay off thousands of dollars in gambling debts her second husband left behind. She didn’t have money for gas during this time, so she bicycled to work in the snow. 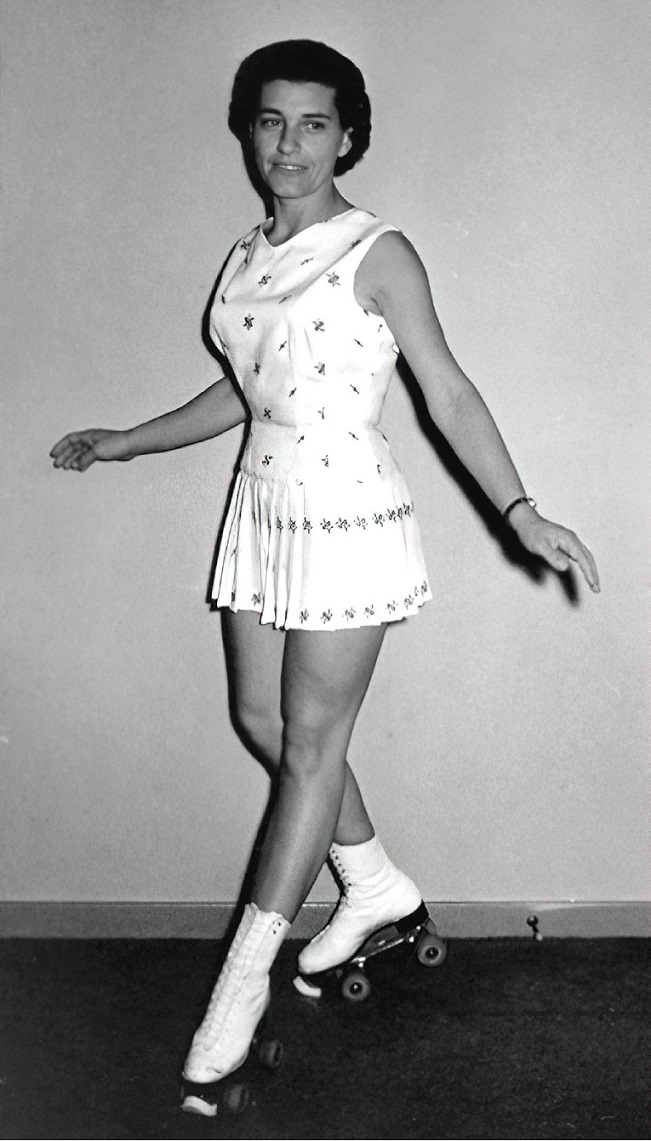 The author's mother had several jobs to make ends meet, including time spent as a roller-skating instructor
Despite working so hard throughout her life, not retiring until age 78, Norris writes: Mom was an artistic soul who painted, wrote poetry and played the piano for social gatherings. She was an athlete who, in addition to her high school cheerleading and majorette activities, played golf, umpired Little League games, bowled in a city league, water-skied, roller-skated, practiced aerobics, did a lot of mountain trekking. In short, she was a ball of energy.

Norris’ memoir encompasses his own life, including an idyllic childhood growing up in the redwood forest of Humboldt County, California. That childhood was shattered at the age of 11 when his parents divorced, the beginning of very tumultuous times. After high school he joined the Air Force only to become a conscientious objector to the Vietnam War, which landed him in military prison. He left that experience behind by becoming part of the counterculture movement and roaming the world. He finally found himself in Japan, began a career at a university there, and retired as professor emeritus. 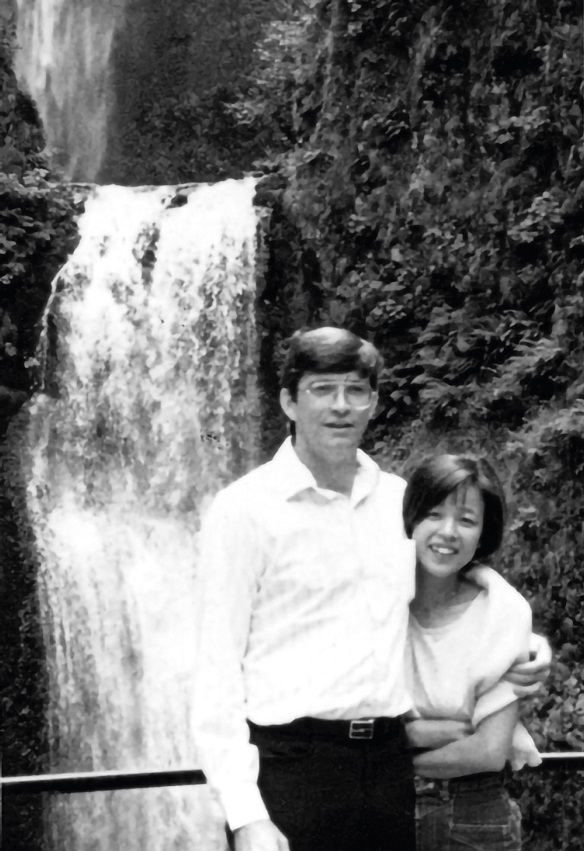 After a tumultuous life, the author landed in Japan, where he met his wife. Here they are on their honeymoon at Oregon's Multnomah Falls
Despite his own memorable life, the impulse to write the memoir came from wanting to preserve the essence of his mother, to create a lasting tribute to her. He writes: During the last month of Mom’s life, she often fretted about her loved ones forgetting her. “Please don’t forget me,” she implored... It was hard to convince her that we wouldn’t. If Mom is up there in heaven and still worried about that, here’s what I’d like to say to her: Mom, no one who ever met you could possibly forget you. Believe me, we’ll always remember, love, and cherish you. We’ll always remember your infectious laugh, your warmhearted hug, and your family stories. Oh, those stories. That’s why I wrote this book! 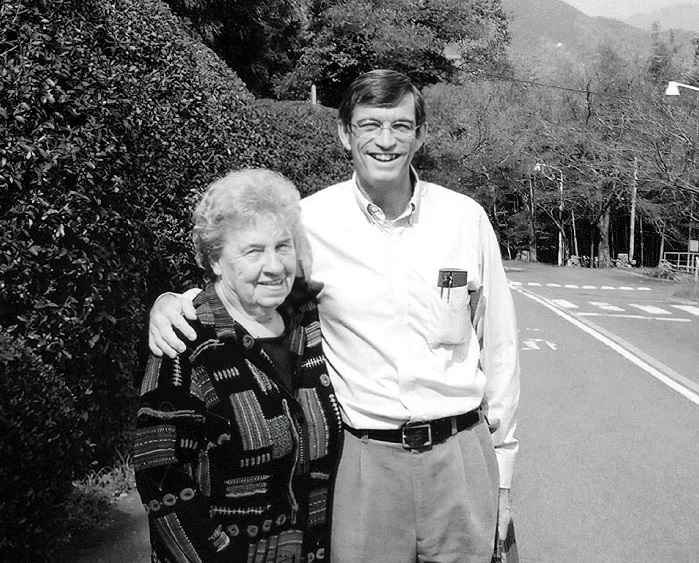 His mother on one of her visits to Japan, near the university where he worked
A few of his mom’s stories from White Salmon, Washington: 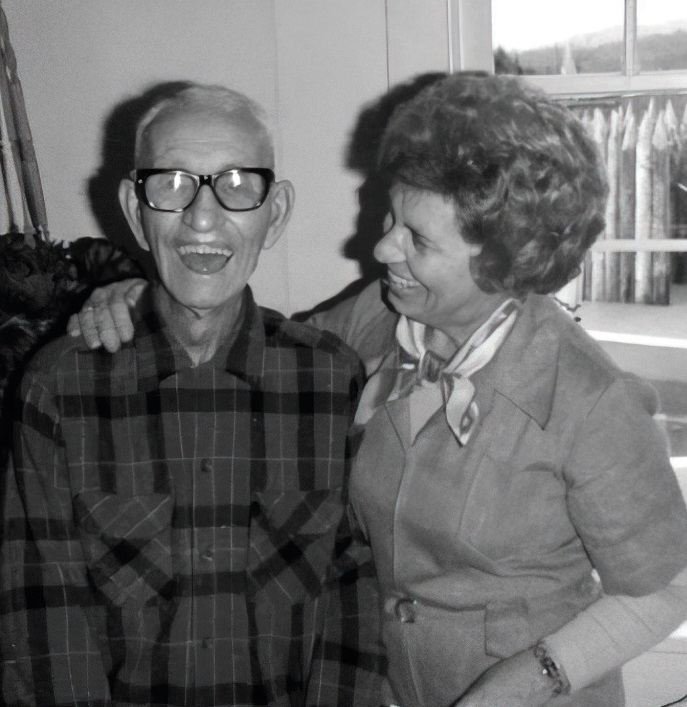 The author's mother with her Granddad Frederick

Norris said, “My purpose in writing this story was to try to evoke the importance of family bonds in helping us overcome difficult times and to remind people not to be afraid of the unknown. I believe it’s a good book for not only mothers and sons but also for people who’ve wondered what the road less traveled would’ve been like had they just taken that first step. I hope readers come away from it with a positive feeling.”

He writes: On January 11, 2021, my seventieth birthday, Mom fell into a coma. Three days later and four days short of her ninety-fifth birthday, she died peacefully. My sister Terri was at her side. I felt a deep emptiness and loneliness that still lingers. I was once again a lost little boy who couldn’t find his mama to run to for warmth and comfort.

Norris answered that loss and yearning by writing his book, The Good Lord Willing and the Creek Don't Rise: Pentimento Memories of Mom and Me.


Robert W. Norris is the author of three novels, a novella, a memoir, and over 20 research papers on teaching. He and his wife live near Fukuoka, Japan. Excerpts and photos from the book are reprinted with permission.