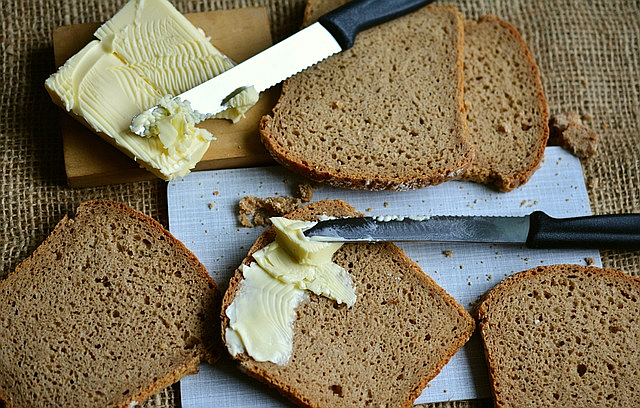 Do you have questions about choosing between butter and margarine?

...by Anita Bermann
Health experts say margarine or the newer spreads made without saturated fats top the list for heart health. Anita Bermann of Bastyr University provides a more detailed look below...

The question of what to spread on your toast becomes more complicated every day, doesn’t it? For years margarine had been the spread of choice, billed as the light alternative to artery-clogging butter. But research on the dangers of trans fats and the possible benefits of butter has muddled the issue. If you want to know which spread is in the lead, read on.

Let’s start with some history. For thousands of years, butter has been a staple food for populations worldwide. When dentist Weston Price examined the diets of the world’s healthiest people in the 1930s, he found that butter and high-fat animal products were common.

Meanwhile, in America between 1920 and 1960, the rates of heart disease rose sharply to become the country’s No. 1 killer. Saturated fat, known to raise LDL cholesterol levels, was identified as a culprit. The theory was that the higher LDL cholesterol levels resulting from saturated fats in foods like butter were directly correlated with heart disease risk, whereas monounsaturated and polyunsaturated fats in vegetable oils were healthful. Margarine, which was already popular due to its low cost, became even more fashionable.

But margarine has traditionally been made by adding hydrogen to unsaturated vegetable oils to solidify them, creating dangerous trans fats (aka hydrogenated oils). In the 1990s researchers at Harvard and elsewhere discovered that people who ate trans fats had an increased risk of early death and nearly twice the risk of heart attack.

In the choice between butter and trans-fat-containing margarine, butter is the clear winner, but new spreads exist without hydrogenated oils. Some are whipped to have less fat; others contain added plant sterol and stanol esters, compounds which are theorized to reduce the risk of cardiovascular disease. A few words of caution, though, on these “better” margarines. Unsaturated fats are not naturally solid, and high levels of processing with artificial additives might be used to solidify them in the absence of hydrogenation. This processing can also damage the oils in ways that promote inflammation.

The Academy of Nutrition still calls for restricting saturated fat to 10-15 grams a day (the amount in 2 tablespoons of butter), suggesting that these new spreads are better than butter. The Mayo Clinic says: "Stick margarines often have more saturated fat than tub margarines. So, skip the stick and choose soft or liquid margarine instead."

If your doctor is not concerned about your cholesterol, and if butter is eaten in moderation as part of a primarily plant-based diet balanced with unsaturated fats, it has not been shown to cause heart disease. Butter also has some nutrition of its own, including iodine and vitamins A and E, as well as omega-3 fatty acids (those same anti-inflammatory fats found in olive oil) if sourced from healthy grass-fed cows. It is also a source of lecithin, a compound that assists in the proper metabolism of cholesterol.

But if your doctor says that you have high total cholesterol, the saturated fat in butter could be concerning, though avoiding margarines with trans fats is always important [in that case, select spreads without hydrogenated oil that do not contain trans fat].

Still not sure which spread to choose? How about vegetable oils in their natural form! Try dipping bread in olive oil, or spread nut butter on your morning toast. Nuts have been clearly shown to lower heart disease risk, when eaten in moderation.

This walnut butter is a great start:

This delicious spread contains heart-healthy omega-3 fats and is a snap to make. The cinnamon adds a hint of warmth for winter. Try it on sliced apples for a perfect snack!

Grind the walnuts in the bowl of a food processor until they begin to stick together and form a paste. Add the salt, syrup and cinnamon and pulse a few times. Add the oil, a little bit at a time, until the walnut butter binds together. The butter will keep 2-3 weeks in the fridge.

Up to 2 teaspoons walnut oil or oil of choice