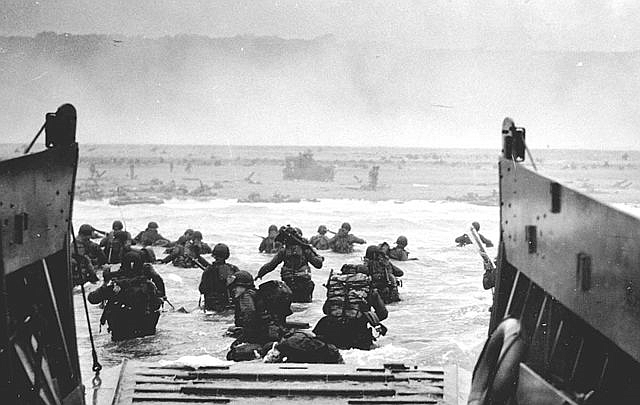 D-Day was the largest amphibious assault ever devised when, on the 6th of June 1944, the American, British and Canadian forces stormed the beaches of Normandy where thousands of troops were killed

On the beach at St. Laurent-sur-mer in the Normandy region of France, a metal monument protrudes from the sands. 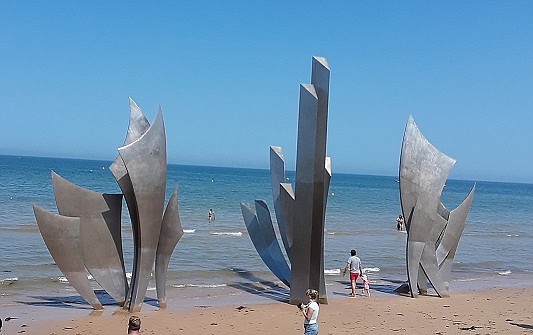 The monument, Les Braves, with its spires resembling sails, reflects the sky and water. To many beach visitors, it signifies hope. To others, it’s a reminder of a sacrifice made 75 years ago.

On June 6, 1944, Normandy’s Omaha Beach became the site of an intense, deadly day as brave American soldiers disembarked from the dropped front of Higgins’ boats to an onslaught of fire power from German troops in the hills above. Ninety-four-year-old WWII Navy veteran, Claire Voss, vividly remembers this June day. 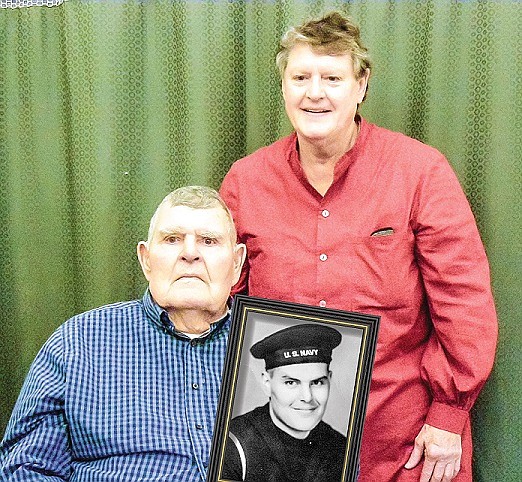 Navy WWII veteran, Claire Voss, and his daughter, Mary Hrudkaj. Voss is holding a photo of himself when he enlisted in the Navy. Photo by Don Beyer

“We were too busy to be scared. None of it scared me,” said Voss.

Seaman Voss was stationed on a Landing Ship Tank (LST), which became a crucial part of this massive operation known as Project Overlord.

Following two to three months of training in England, he said, “On June 5, around 6:30pm, our convoy left for France from Plymouth Harbor, England.”

The mammoth, slow-moving ship carried tanks, vehicles, cargo and troops to unload on the beaches of Normandy. The crew’s mission was to support U.S. troops in their goal of defeating the Germans. Voss served as machinist mate in the engine room of LST 502.

Voss already knew how to operate a diesel engine.

“Growing up in Grand Rapids, Michigan, this was General Motors country,” he said.

He describes the evening while crossing the English Channel, seeing thousands of planes in the sky headed to bomb the Normandy coast and others to deposit paratroopers inland.

“There were so many bombers you could barely see the sun when it came up. It looked like a whole bunch of flies.”

Voss also describes a scene of battleships, cruisers, destroyers, mine sweepers and over 170 LSTs in the English Channel. . . destination Normandy.

“There were so many ships, you could hardly move.” 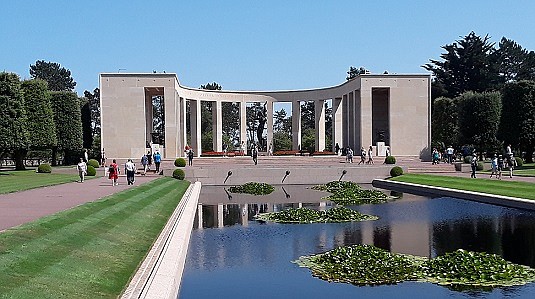 The reflecting pool at the Normandy American Cemetery. The cemetery contains the graves of nearly 10,000 American soldiers, photo by Don Beyer.

At 6:30pm on June 6th, Voss’ LST unloaded small boats carrying soldiers to Omaha Beach. This was the second part of the first wave to arrive.

He noted, “It was the hardest beach to land on as it had a cliff above the beach.”

From German bunkers perched over Omaha Beach, cannons and machine guns fired rounds continuously on American soldiers. “We got men off but we couldn’t offload our heavy equipment as the beach was not yet secured.”

Voss’ LST with its Army-Navy surgical team and corpsmen took on casualties returning from the beach.

“Our bunks became hospital beds for the wounded so we had to sleep any place we could,” said Voss. “We slept soundly and quickly when tired.”

When not in the engine room, Voss asked a medic, “Anything I can do?” He stepped aside from his job as machinist mate to help medics by mixing dried plasma with purified water. On June 7, his LST finally off-loaded their cargo of heavy equipment onto Omaha Beach.

The ship’s crew boarded 400 casualties that day, both Americans and Germans. Being of Dutch descent, Voss also understood German. He became the ship’s translator.

The transport scenario played over and over with the 12-hour trip between England and Normandy – back and forth.

“All together, we made eight round-trips from England to Normandy, four trips to Omaha and four to Utah beaches.”

Voss described an incident while aboard LST 502.

“We hit a sandbar. On our port side, LST 282 went in our place. From the air, a German plane’s remote-controlled bomb was headed our way.”

The bomb hit the masthead of Voss’ ship and made a direct hit on LST 282. He recalls launching small boats to assist in the rescue of casualties.

“The temperature started dropping down to freezing,” Voss said.

New York, Brooklyn Navy Yard and Boston were the next stops, where he was granted a 30-day leave while the ship was overhauled.

“A Navy peacoat was all I had. I was cold,” Voss recalled.

He took leave and headed to Grand Rapids, Michigan. However, his service was hardly over.

Now stationed on a Landing Ship Medium (LSM), which held 284 sailors, he joined the Pacific theater and sailed to Pearl Harbor, then Guam, Saipan and the Tinian Islands.

“We touched South America while going through the Panama Canal,” he said, “which was the highlight of this trip. As we were headed toward Japan, a few days later, we heard about the dropping of the “A” bomb.”

The invasion of Japan was cancelled with Japan’s surrender.

Voss said, “We looked up in the morning and everything was white.” All buoys were marked with white flags. That wasn’t the only sight in front of him.

“Our LSM was one of the closest ships to the USS Missouri where the signing (of surrender papers) took place September 4, 1945.”

Voss entered the naval service as a Seaman in November 1943 and exited as a Fireman First Class in April 1946.

When asked why he joined the Navy instead of the Army, he replied, “My tummy (gut) took over. I was 17 and didn’t want to wait to be drafted by the Army.”

Claire Voss, with Patricia, his wife of 64 years, began their early married years in Grand Rapids. They moved many times to where jobs were available, along with their four children.

Voss worked at the Puget Sound Naval Shipyard and was also involved in Habitat for Humanity. He was instrumental in building several homes for needy families in the South Kitsap area. He resides in Port Orchard.

Today, Les Braves watches over families picnicking and folks sunbathing on Normandy’s Omaha Beach, while children frolic in the waters of the English Channel… thanks to the military service of people like Seaman Claire Voss!