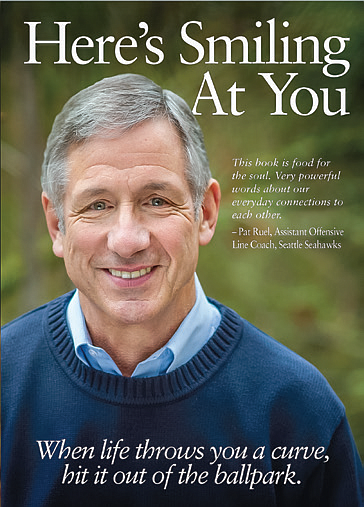 Tony Ventrella finished his third book, “Here's Smiling at You” after running for U.S. Congress in 2016

Mention the name Tony Ventrella to practically anyone in the Puget Sound region and chances are it will be met with a smile and a nod of recognition.

The popular sports reporter has the rare distinction of having worked at all three local network affiliates: KOMO, KING and KIRO, the latter two as sports director. Tony followed these ventures to become Digital Media Host for the Seattle Seahawks.

Sports-oriented career aside, Tony is a familiar face as emcee of charity fundraisers, motivational speaker and, a little over a year ago, political hopeful—when his career took an abrupt U-turn.

In the fall of 2015, Tony decided to run the following year for U.S. Representative in the 8th Congressional District against incumbent Dave Reichert. But, he admits, there was one major drawback: “I hate asking for money.” Running a campaign without accepting funds from any special-interest or political action groups caused the Democratic leadership to cast doubt on Tony’s commitment to the race and perhaps to the job itself. He decided to drop out, but his name remained on the primary ballot. Since the two top vote-getters appear in the General Election in November, perhaps it was that familiar name and face that propelled him to be one of the top two—even without campaigning. Reichert won the election with 60 percent of the vote, and Tony went back to his “normal” life of media and writing his third book, Here’s Smiling at You.

In the preface of his book, Tony wrote: “On one of my long hikes one rainy February afternoon, it dawned on me how strange it would be if we all lived forever. First of all, if you think the traffic is bad now on 405 through Bellevue, just think what a parking lot it would be if a bunch of 200-year-old people were driving 45 in the third lane. There’s no doubt about it; there’s a reason most people move on to the next world before their 110th birthday…I make it easy on myself by believing I’m going to heaven where I’ll see my parents and two sisters who passed away before me, all my friends and people like Abe Lincoln and Joe DiMaggio.” 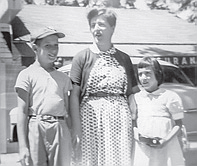 Growing up, Tony really enjoyed his little sister Bunny, who was just a year younger. She passed away from cystic fibrosis when she was 10. Tony shares that on Christmas Day in 2016 he posted a Facebook memory of their last Christmas together 50 years before. The post was seen by portrait artist Michael Reagan of Fallen Heroes Project fame. Michael asked Tony for a photo of Bunny and soon presented him with a portrait of her. “Michael’s gift has warmed the hearts of families around the world, including my own,” he says.

Born in the summer of 1944 as the fourth child of five to Mary Louise and Anthony Ventrella, Tony was raised in New England. His family moved to Wilton, Connecticut in 1953, where his dad built a small Cape Cod-style house on two acres and became the town barber.

Tony was on the Wilton Little League team and had a couple of boyhood friends not too far away. But he also enjoyed the family’s huge lot, which offered lots of opportunities for outdoor exploration. A baseball and football fan, when the other kids weren’t around he used his spirited imagination to create solitary games.

“I used to love playing solo football after the trees started dropping their leaves in October,” he recalls. “I would always be the running back, and the idea was to run across our front lawn avoiding the leaves on the ground. As soon as I heard the crunch of a leaf, I knew I was tackled and would have to go back into the huddle. The imaginary huddle, that is. I wouldn’t trade my childhood for all the sports video games or online games in the world.”

After graduation, and urged to follow his father’s footsteps, Tony got his barber’s license. He also signed up for the Army Reserves where he was able to ply his trade right away. After the Army, he opened the Village Barber Shop in Wilton, and got a part-time job writing sports for the Wilton Bulletin. But radio broadcasting was his dream, so Tony made the 25-mile drive to Brookfield for the Sunday night shift from 4pm to midnight. Never mind that it paid two dollars an hour: he was now a professional radio broadcaster! 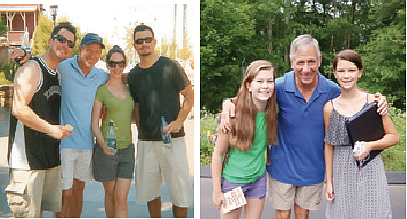 From Connecticut it was on to Fort Wayne, Indiana, and then, just as an offer came in from Tulsa, Oklahoma, Seattle’s KOMO made him an offer. Since Seattle was not far from Portland, where his ex-wife and children had moved, he decided that was his best choice.

“Our divorce had been a heart-wrenching decision for both of us, but my career – and self – had been my main focus, not my family,” admits Tony. But he remains close to his three grown children and 10 grandchildren.

Today, Tony is married to Mika. They are a couple with dual careers and share their home with two 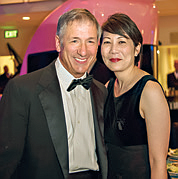 Tony and his wife Mika share their home with two cats, Rocky and Pinky

cats, Rocky and Pinky. Running daily, involved in theater, philanthropy, speaking engagements and consulting, Tony has one overriding commitment to himself and others: Keep Moving Forward…and help others to do the same.

“I don’t want to hear the excuse that you’re too old to make a difference. Youth is not a time of life. It is a state of mind,” he declares. “Whether you’re 19 or 90, there is in every human being’s heart the lure of wonder, the unfailing childlike appetite of what’s next, and the joy of the game of living.”

Tony has lived this philosophy throughout his life as he went from town to town, job to job, experience to experience. Through it all, he kept one theme in mind. “Learn all you can from other people, help as many people as you can, never take yourself too seriously and, no matter what, keep smiling.”

Here's Smiling At You: When life throws you a curve, hit it out of the ballpark is the story of Tony Ventrella’s life, but with an important message for us all: There is good to be found in everyone; in every circumstance. Tony offers a reason to smile in every chapter and lessons that have been learned through¬out his life—from small-town local players and coaches to NFL friends such as Pete Carroll and Doug Baldwin. But his role models have continued to be his mother, dad, sister Bunny and a favorite uncle, Ralph.

“…I’ve learned that everyone you meet deserves to be greeted with a smile.”

“Uplifting. Compassionate. Humorous. Honest.” That is how readers describe Tony’s new book. But those who know him—and many who don’t—say that is exactly how you would describe the man.