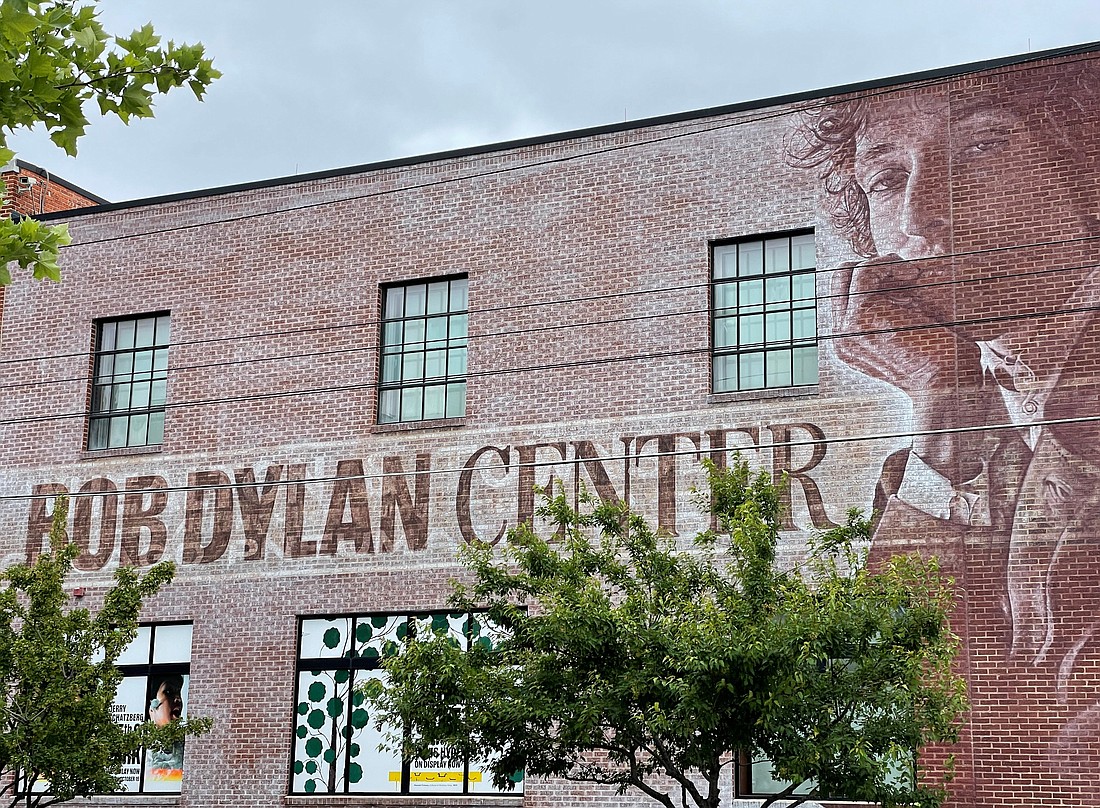 Welcome to the Bob Dylan Center! Photo by Debbie Stone

...by DEBBIE STONE
Fans of Bob Dylan now have a place to go and pay homage to one of the most original and influential voices in American music. Opened this past May, the Bob Dylan Center is situated steps away from the nearly decade-old Woody Guthrie Center in Tulsa, Oklahoma’s burgeoning arts district. It’s an apt location, as the famed musician was heavily influenced by Guthrie, along with other American folk artists. 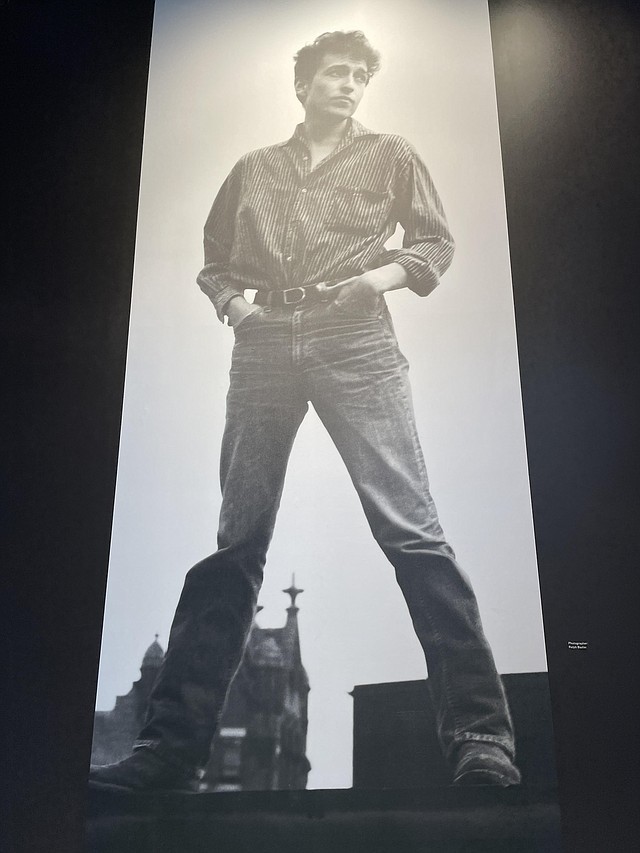 Photo by Debbie Stone
The Center is mecca to Dylanologists, but it’s also of interest to anyone with even the slightest curiosity about the groundbreaking artist. Designed by Olson Kundig, the world-class facility boasts nearly 30,000 square feet of interactive exhibit space with cutting-edge technology, and depicts a rare 1965 image of Dylan on its three-story façade. 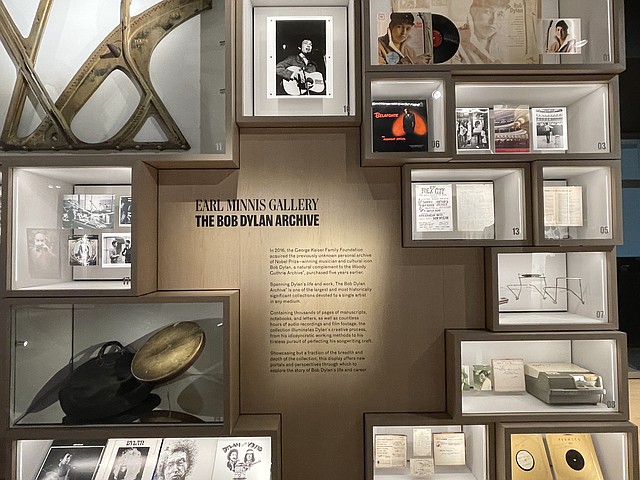 Photo by Debbie Stone
Inside, visitors have access to an immense collection of artifacts from The Bob Dylan Archive. Dylan sold his personal archives in 2016 for a reported $20 million to the George Kaiser Family Foundation to establish the Center. The entire archive contains about 100,000 items; a number of which are on display to the public, with the rest reserved for researchers and scholars or to be put out later as the museum rotates its exhibits. 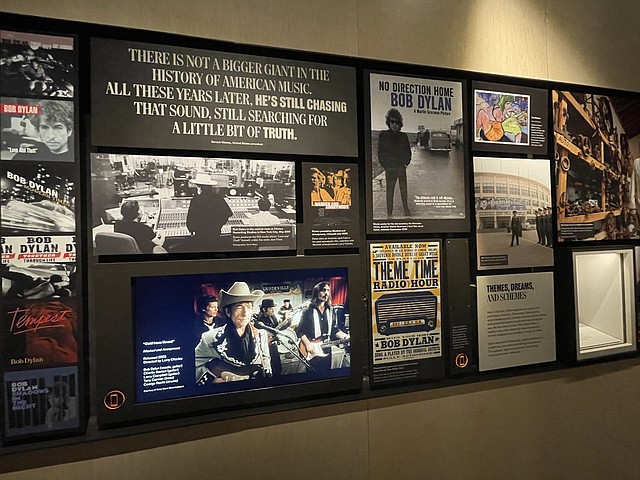 Photo by Debbie Stone
The Center is packed with all sorts of ‘Bobabilia’ treasures: performance footage and interviews, videos, photos, correspondence, articles of clothing, musical instruments, posters and paintings, essays, book drafts, notebooks with handwritten lyrics for songs and their revisions, bootleg LPs and outtakes, typewriters and even the contents of one of Dylan’s wallets, which included Johnny Cash’s phone number! 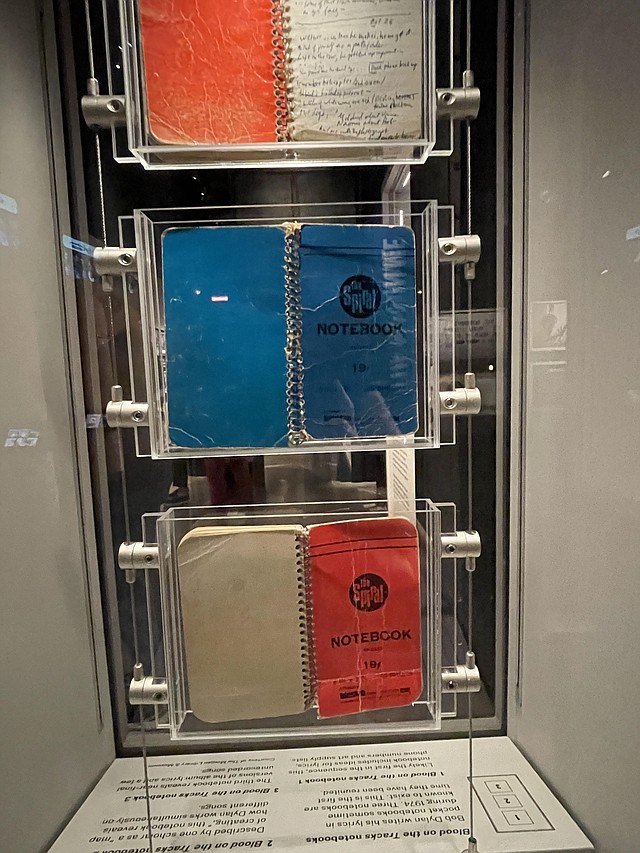 Photo by Debbie Stone
The vast assortment of handwritten song lyrics is especially of note, offering visitors the opportunity to have an intimate perspective into Dylan’s working process.A self-guided, self-paced audio tour provides the soundtrack for a musical journey, which gives visitors insight into Dylan’s unparalleled seven decades as one of the world’s most important cultural figures. It’s a detailed timeline of his life, from his early years in Minnesota through the present and presents a window into the voice of a generation. 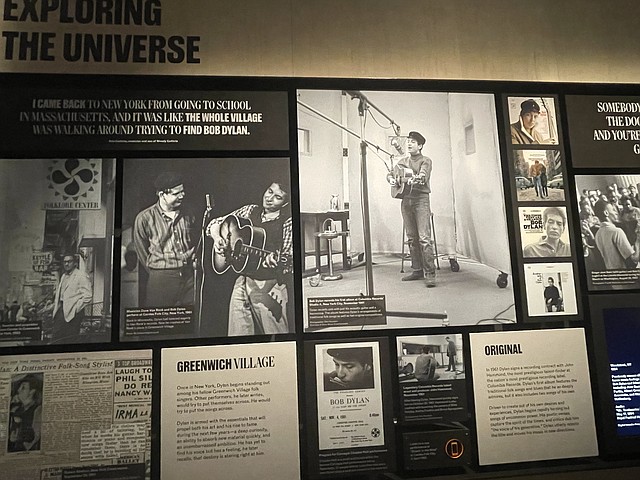 Photo by Debbie Stone
Dylan taught himself piano and guitar and played in several bands while coming of age in the Heartland as Robert Zimmerman. He moved to New York in 1961 and began to play in various clubs in Greenwich’s folk music scene. It didn’t take long before he made his mark, getting signed to Columbia Records and releasing his self-titled debut album a year later. 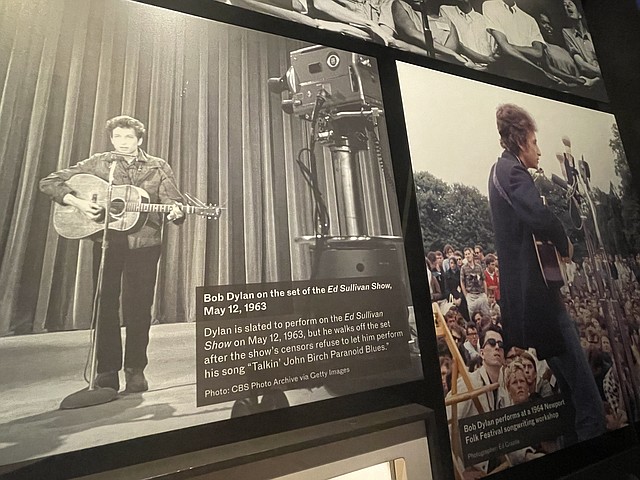 Photo by Debbie Stone
His oeuvre consists of more than fifty albums and 600 plus songs, with some of the most famous being “Blowin’ In The Wind,” “Like A Rolling Stone,” “All Along The Watchtower,” “Knockin’ On Heaven’s Door,” “Tangled Up In Blue,” and “Make You Feel My Love.” His songs have been covered more than 6,000 times by such noted and diverse artists as Duke Ellington, Jimi Hendrix, Stevie Wonder, Adele, Pearl Jam and U2. Dylan has sold more than 125 million records and continues to travel the globe, performing nearly 100 concerts annually. 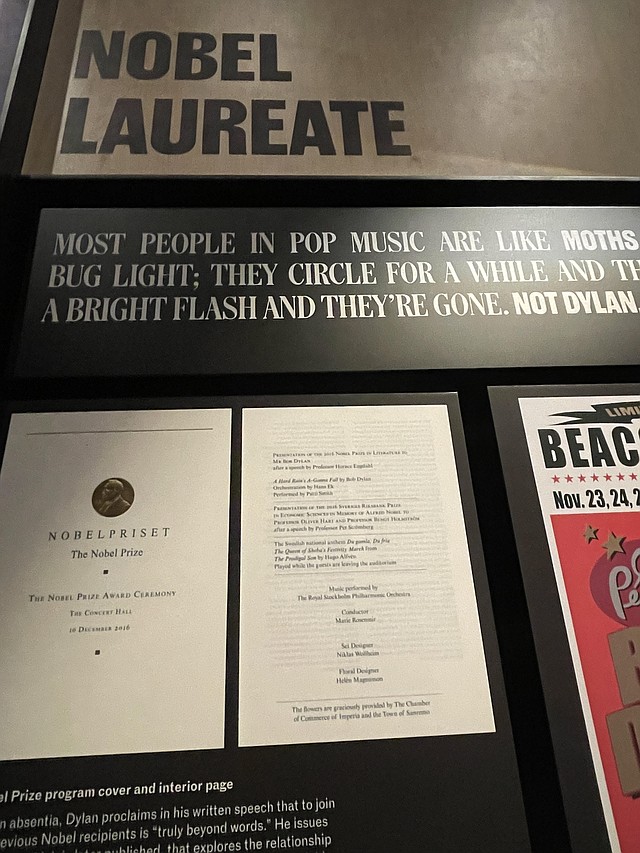 By Debbie Stone
Often referred to as the poet with a guitar, Dylan was awarded the Nobel Prize for Literature in 2016 – the first songwriter to receive this distinction. He was also presented with a Kennedy Center Honor, the Presidential Medal of Freedom, an Academy Award and eleven Grammy Awards.In recent years, Dylan’s work as an author and visual artist have added to his acclaimed reputation and popularity. In fact, visitors to the Center will be greeted by one of Dylan’s own sculptures, a 16-foot-high piece of metalwork he designed and built for the building. It serves as a gateway to the trove of wondrous treasures inside. 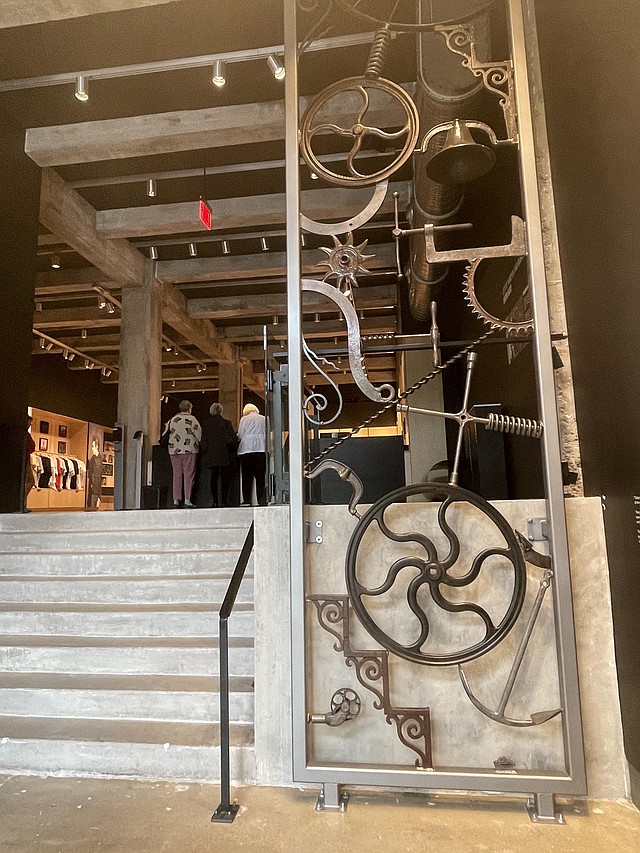 Photo by Debbie Stone
Dylan has united people with his music, often singing about such moral issues as war, poverty and discrimination. Ironically, though, he is the last person to tell you what his songs mean. And he has defied classification, refusing to be boxed in by critics and fans, who have tried relentlessly to nail down his style and persona. The enigma that is Dylan keeps us on our toes, always wondering what he’s thinking about and what he’ll do next. What we do know is that he’ll keep pushing the envelope as he continues to be a creative beacon. 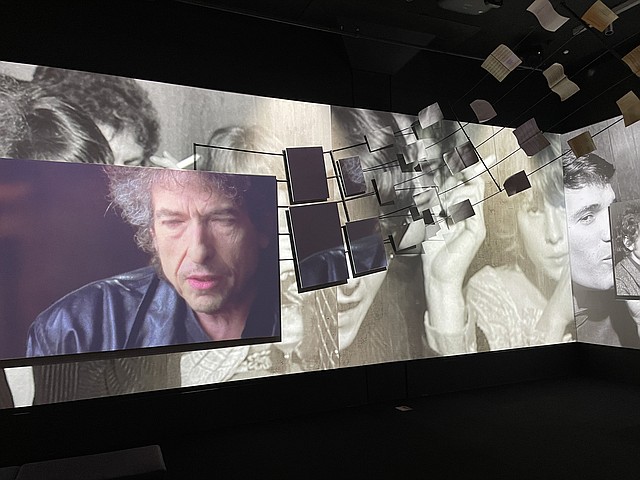 Photo by Debbie Stone
Touring the Center is an immersive and often overwhelming experience due to the breadth and depth of the exhibits. Dylan recognized early that his work could have historical value and interest and he put aside everything from such gems as the leather jacket he wore when he went electric at the 1965 Newport Folk Festival to the 1964 letter of admiration from Johnny Cash and the postcard of apology from Pete Seeger. There are three pocket-size notebooks with lyrics for 1975’s “Blood on the Tracks,” four drafts of his first book, “Tarantula,” a photo of the coffee house he played at the University of Minnesota in 1961, pictures of him living in Greenwich Village and hanging out with folk singers and beat poets, a letter he wrote for a magazine expressing his bewilderment at becoming famous, the actual tambourine that inspired the song “Mr. Tambourine Man” and so much more. 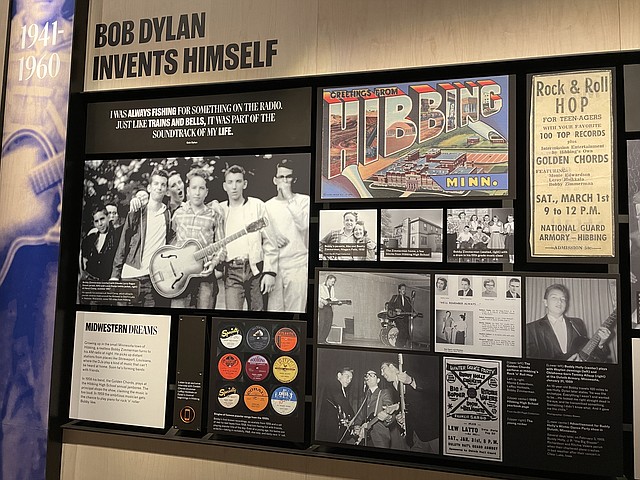 Photo by Debbie Stone
Soak up the introductory, multimedia montage as it takes you through a mesmerizing cascade of Dylan’s archival music and film clips, directed by renowned Dylan chronicler Jennifer Lebeau. 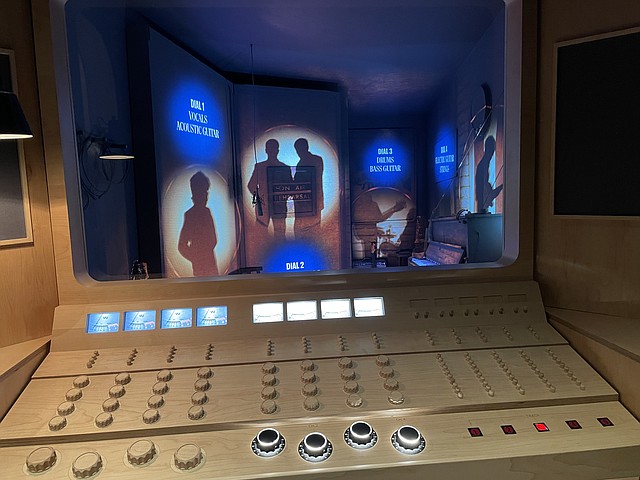 Photo by Debbie Stone
Experience what it was like to be present at one of Dylan’s historic recording sessions in the Church Studio’s recreated control room. You can listen to conversations from five real recording sessions for such tracks as “Like A Rolling Stone,” “Mississippi,” “I Want You,” “Most of the Time” and “Knockin’ On Heaven’s Door. Musicians describe their experiences while working with Dylan and the process involved in bringing a song to album.The hits keep coming in the Columbia Records Gallery, which offers an in-depth look at the creation, performance and production of some of Dylan’s beloved songs, including “Tangled Up in Blue” and “Chimes of Freedom.” 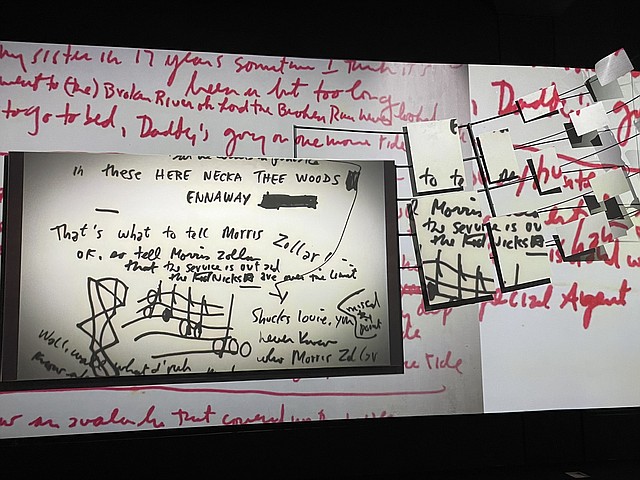 Photo by Debbie Stone
Another popular highlight is the 125-song electronic jukebox that Elvis Costello curated, which has covers of Dylan’s works, as well as Dylan’s own recordings and studio outtakes.And then there’s the screening room, where visitors are given access to Dylan-related scripted films, concert performances and never-before-seen material from the Archive.

While the life and work of Bob Dylan is the focus of the permanent exhibit at the Center, the facility will also offer additional exhibits, public programs, performances and lectures with the goal of inspiring creativity.