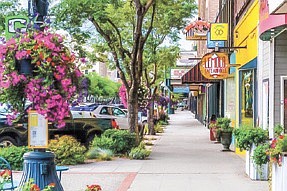 Sunny Wenatchee Valley is a paradise for lovers of the outdoors. Forbes and MoneyWise say Wenatchee is one of the nation’s top places to retire, calling it a scenic, sunny small city with good doctors, a low crime rate, low cost of living, performing arts centers and wineries, plus a revitalized downtown.

24/7 Wall Street called Snoqualmie Washington’s best city to live. Snoqualmie is one of safest places in the nation, plus it has a higher than average concentration of restaurants, bars, museums and movie theatres for a city of its size.

Northwest Prime Time’s annual round-up of Best Places to Retire in Washington State is upon us. Reporting from the usual suspects— Forbes, MoneyWise, Kiplinger, Where to Retire, WalletHub, TopRetirements and others— shows Washington retirement destinations falling off many national lists.

But retirees are not too concerned about how their hometown ranks; most plan to stay in or near their current location (or if they move, it’s often to be closer to family). Remaining close to family and friends, maintaining ties in the community and with current health care providers are top considerations. But for those adventurous retirees considering relocation within the state, here is this year’s ‘Round-Up’ for your consideration.

In Where to Retire, Jean Arthur described Bainbridge Island as a wonderful place to retire for those with the means: sophisticated and friendly, social and volunteer opportunities, outstanding parks and a high balance of cultural outlets for a community of its size.

While Seattle and environs make almost all “Best Places to Live” lists, in recent years the area has dropped out of “Best Places to Retire” lists because of congestion, cost-of-living and other issues. Despite skyrocketing housing costs, Niche listed Seattle as the 24th best city for retirees in the country, stating that Seattle’s clean air and water, high quality of life—including recreational opportunities and cultural attractions along with quality health care and services—make up for higher costs.

The ferry dock in Wahkiakum County and the County Courthouse in Cathlamet. Money Talks writes that Social Security goes the furthest in rural locations like Wahkiakum County. Founded in 1854, it is the second-smallest county in the state, so seniors should think carefully about what type of nearby services and amenities they need before moving there. But what it lacks in size, it makes up for with a beautiful setting, particularly in the communities along the Columbia River.

In addition to the expense of living here, Western Washington has the added burden of gray days for those seeking warmth and sunshine—one factor (along with a lower cost of living) that boosts our Eastern Washington neighbors. But notably, Spokane – the darling of many best places to retire surveys – fell almost completely off the national lists this year. Other absences from previous years: Sequim, Olympia, Vancouver, Bellevue, Port Townsend and Walla Walla.

However, several Washington state locations, including some unexpected destinations, did make it onto this year’s national lists.

Bellingham: Reader’s Digest said Bellingham is one of the top ten best places to retire in the country with its “abundance of opportunities for fun and adventure: from sailing and hiking to a bustling art scene.” Western Washington University offers lifelong learning for Bellingham-area retirees.

Not to be outdone, Bellingham, a perennial ‘Best Place to Retire’ favorite, was named as a Top 10 Retirement Destination in two national lists: Reader’s Digest and TopRetirements.com.

Liberty Theater in Camas. According to Cheapism, “Camas is classic Pacific Northwest small-town cool… Camas is a scenic wonderland and a natural spot for active retirees. It sits near the Columbia River and Oregon- Washington border and sports a beautiful downtown with lots of art, good food and culture.”

Cheapism called out Camas as one of ‘30 unexpectedly awesome places to retire across America’ while 24/7 Wall Street said that Chelan County is Washington State’s best county to retire. Money Talks reports that for ‘Top Places to Retire on Social Security Alone,’ consider Washington’s Wahkiakum County, which came in 5th best county in the country on this list.

Tacoma was cited by Where to Retire’s Julie Fanselow: “Residents of Tacoma adore their scenic Mount Rainier backdrop. This city nurtures artistic expression and diversity and has a lower cost of living than other Pacific Northwest locales. Retirees attest to its excellent weather for gardening. It is less congested and less expensive than Seattle.”

Where to Retire magazine profiled three Washington communities over the past year: Tacoma, Edmonds and Bainbridge Island.

When Debby and Bruce Dennis sold a family home in Arcadia, California, they wanted to explore places around the country to live in retirement. “No place was really jazzing us,” explained Debby. “We have very dear friends in West Seattle and so were familiar with the area but thought we couldn’t afford it. Our friends’ daughter-in-law is a realtor and said, ‘au contraire.’ ” In 2012 the couple came up over a long weekend and looked at properties in West Seattle and adjacent areas.