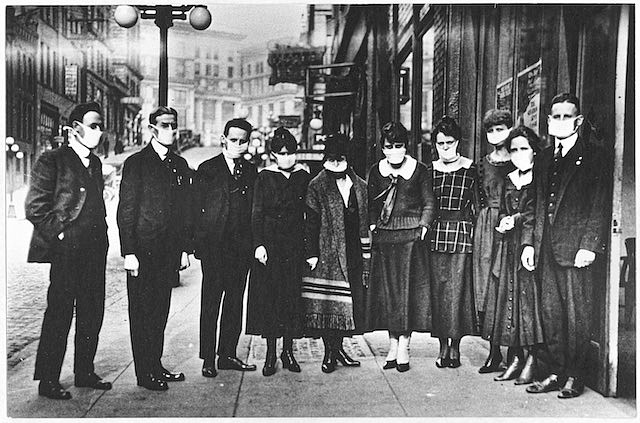 The Spanish flu preyed on everyone, but, unlike today, it wasn’t mostly the old and sick who suffered so much as the young — half of those who died were between ages 20 and 40. My grandparents, in their 20s during 1918, were in that demographic sweet spot.

My father dictated an oral history of his childhood years before he died in 1990. It’s very incomplete, but I will let him tell his flu story, what he remembered from when he was about four years old. My guess is this took place in late 1918 or early 1919:

“When dad returned from Alaska, we moved to a basement apartment in the University District… People were wearing masks over their faces because of the flu epidemic, and Mother nearly died. I remember the doctor coming to see her. She was dry and very flushed with fever, and breathing badly and [the doctor] apparently gave my father some bad news because my dad put his arm around me and we sat in the bedroom for a long time. He put me to bed and I cried, because I knew something bad was going to happen.

“I was told later that two days after Mother’s crisis the doctor himself had collapsed and died, apparently sick with pneumonia while still tending the sick as best he could. If my dad and I got influenza it must have been mild.”

My grandfather could be a rather stern Scandinavian papa, so the image of the two of them sitting vigil over my granny — with a physical sign of affection to boot — underscores the severity of the situation.

Dad’s account brings to mind a couple of other things. The city health officials encouraged people to go to the hospital if sick, but later encouraged them to stay home to be cared for by family members so that more severe cases could be tended by professionals. One problem with the stay-at-home approach was that it probably caused an undercount of flu cases. It’s sobering to realize the crisis grew so large that health care was rationed.

I’m struck that poor folk like my grandparents could afford to have a doctor make a house call, which suggests they were luckier than many. The doctor was not alone. Bristow says that “hundreds and hundreds” of American doctors and nurses died during the outbreak.

Holding on to such memories is important, Bristow says. The 1918-1919 epidemic was largely forgotten, subsumed, she says, in the story of World War I. She too lost family (her great-grandparents) to the epidemic but did not find out how they died until some 70 years later. In the event of a new pandemic we need to have the capacity to remember, she says, “so that we’re conscious of those who have suffered losses” and can tend to their long-term healing.

Bristow believes the current coronavirus situation should also be a reminder of the inequities of access to health care. Because records were not kept, it is unknown whether Spanish flu killed more or fewer Americans by race, class or immigrant groups, but it’s a good bet care was not equal, then or now.

My father went on to become a physician and by all accounts had a great bedside manner with patients. He was very moved by the self-sacrifice of his mother’s doctor, a nameless physician whose sacrifice has had an impact down through the generations of my family. Thanks to my dad’s memory, I won’t forget how much it meant to us.

Other articles by Knute Berger on the pandemic can be found at crosscut.com, including “Meet the Anthony Fauci of 1918 Washington.”