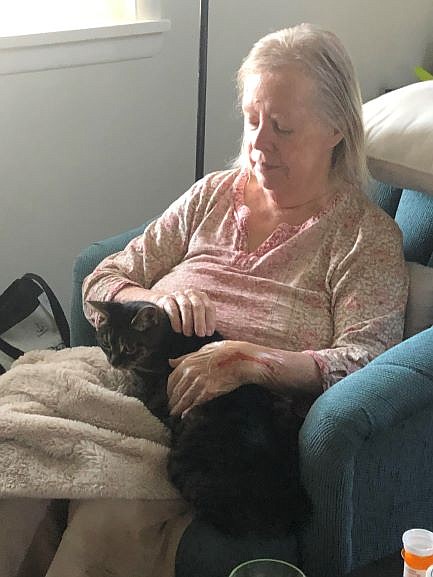 Baba and her cat Rosie at her new home.

The COVID-19 pandemic has altered the way of life for almost everyone. There is plenty of news in the media about the medical and economic effects of the pandemic, but what does it mean for personal and familial relationships? People who live in long-term care facilities are a particularly vulnerable population in regards to physical and emotional isolation. Most care facilities are under a lockdown right now, meaning residents are not allowed to have any visitors or leave their room. For many, this experience is as emotionally isolating as it is physically. I sat down with my grandmother, who I call Baba, to chat about her experience in a long-term care facility under lockdown. (I previously wrote a personal essay about Baba here.)

For three weeks, Baba was in a facility under lockdown.. Though there weren’t any cases of COVID-19, the facility was quick to take action against the viral disease from getting in. Staff members in the facility were strict about social distancing, careful in their cleaning practices and wore personal protective equipment.

“They wore masks, which is confusing for [some] older people,” said Baba.

Baba described her daily routine at her facility as monotonous. For most people living there, eating daily meals at the dining room and socializing with other residents was the highlight of their day. After the lockdown was enforced, all meals were brought directly to the residents as they were not allowed to leave their rooms. The daily rhythm for residents revolved around employees bringing them a tray of food three times per day.

Around 6am, a staff member would come into each room and check the vital signs of the residents. One of the tasks was monitoring temperature to ensure that the residents were not developing fevers, which is one of the symptoms of COVID-19.

After that, they would be transferred to their wheelchairs to get ready to eat the breakfast that was delivered to each room. For the rest of the morning, Baba would sit in her wheelchair and wait until her lunch was delivered. Occasionally she would watch the television in her room or talk on the phone.

“They had people going up and down the hall playing the guitar asking you to sing along,” said Baba.

Extra servings of desserts were brought to residents to keep their spirits up. As were crossword puzzles to keep their minds stimulated in isolation.

“They just tried their best to keep folks happy,” she said.

Despite the best efforts from the staff to keep the residents entertained, this new way of living was a difficult adjustment.

Before the lockdown, the residents had plenty of opportunities to socialize with each other. Besides gathering in the dining room for meals, the days inside the facility were broken up by activities like movie nights, craft projects, storytelling groups and visits from friends and family.

After the lockdown, Baba got in her wheelchair and went down the hall to the physical therapy gym to see her family members through the window. I was able to pay her a visit through the window when I went down to visit family in late March. A few days after our visit, the facility closed down the gym because it was dangerous to have multiple people in the room at once. Since her room was facing the enclosed courtyard instead of the parking lot where the gym window was, she could not even see visitors through the window.

Even though her window visits were short-lived, other residents were not so lucky. Baba said that she was one out of only a few of the residents who got window visitors. There were many people who did not have a close relationship with family members or were not physically able to leave their bed to go down the hall to the physical therapy room.

It was hard to stay positive during an isolating lockdown but Baba gained some hope from the kind and patient nursing staff who cared for her each day she lived in the facility. The nurses and nursing assistants kept Baba company during long days of physical and emotional isolation. She got along particularly well with a young nursing assistant, so well that they engaged in a teaching exchange of languages. Baba learned some Spanish words and phrases and she taught him the same in Russian.

Another break from the monotony of the lockdown was Baba’s weekly visit to the doctor’s office. She liked this visit because she got to ride in the van with the friendly driver who would stop at a drive-thru Starbucks on the way back to the assisted living facility, she said.

Today, Baba is living independently as she was released from the assisted living facility several weeks ago. Her two daughters took on the roles of the nursing and the kitchen staff inside her rental home. Despite the precautions taken by the staff of the assisted living facility, Baba feels safer in her new house because she is only in contact with family. Her daughters are vigilant in preventing the spread of the virus through measures of social distancing.

After she was admitted to the assisted living facility, Baba had to leave her elderly cat Rosie in her condominium. Rosie was alone in the condo for three months while Baba was living at the care facility, aside from drop ins by family to refill her food and water bowls. Baba and Rosie were reunited once she moved into her rental home. The cat jumped all over Baba, meowing with joy once the two saw each other.

“She very rarely leaves my side now,” said Baba