Hot on the trail of Namibia's Little Five 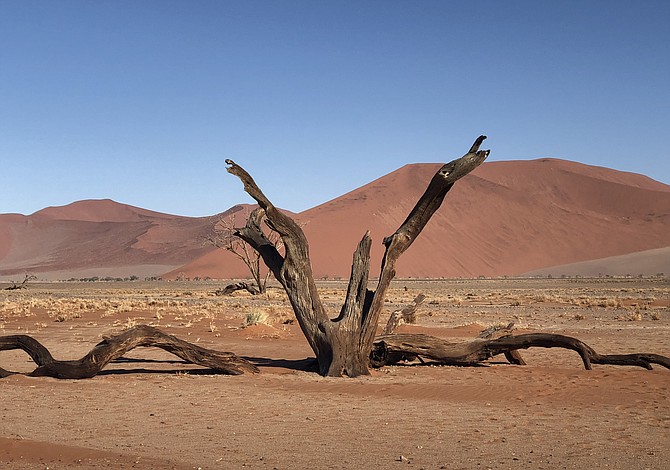 The tour revealed another sand dweller, the Fitzsimmons Burrowing Skink. These slithery lizards typically forage later in the day when the sand is of a more suitable temperature. As they move, they leave characteristic wavy tracks. Our guide had eagle eyes because he saw the skink’s signs from within the vehicle. He braked hard, jumped out, ran partway up a dune, shoved his arm into the sand and then triumphantly held it up to us, holding what initially appeared to be a tiny snake.

We continued our treasure hunt and came across a Shovel-snouted lizard. This is the famous “dancing lizard” of the Namib Desert. To avoid overheating in the scorched sand, it raises alternating feet every ten seconds in a well-coordinated routine. When this strategy no longer works (or if it needs to escape danger), the lizard dives down into the sand seeking cooler temps. Its snout helps it to plunge deeply and “swim,” where it can remain buried for up to twenty-four hours, using air trapped in the sand. Our guide explained that this type of lizard is one of the fastest creatures in the desert and that its impressive hind legs can propel it forward with force. The speed allows it to capture its prey, which not only provides food, but also water. If unsuccessful in its hunt, the lizard is fortunate to have a second bladder for storing moisture from the desert fog.

We also spotted a Cartwheeling spider. Unlike others of its species that typically spin a web as an entrapment device, the Cartwheeling spider roams around searching for prey. This is a dangerous pursuit, however, as it makes them a target for hungry wasps looking to implant their larvae in the spider. They feed off the spider and eventually kill it. To avoid such a nasty fate, this creature has adapted an unusual getaway plan. It cartwheels down the dunes at forty-four turns per second in a blur of motion. If there were insect Olympics, the Cartwheeling spider would undoubtedly win a gold medal.

The Sidewinder was a highlight for many on the tour. This venomous viper was well-camouflaged in the sand when our guide first found him. Its body was completely hidden with the exception of its eyes, which peeped out from atop its head. What’s exceptional about these creatures is the way they move – spiraling on their sides in smooth lateral curves. We watched in awe as the snake gracefully undulated up the steep dunes. It kept most of its body off the sand, allowing it to travel over the hot surface without overheating. As an ambush hunter, the Sidewinder remains still, then wiggles its tail to attract its prey.

My favorite of the Five was the Namaqua chameleon. This is the fastest chameleon in the world. It uses its lightening quick speed to race after skittering beetles and can eat up to two hundred of these insects a day. And it changes color to regulate its temperature, turning darker in the morning to absorb warmth, then lightening in the heat of the day to reflect the sun’s rays.