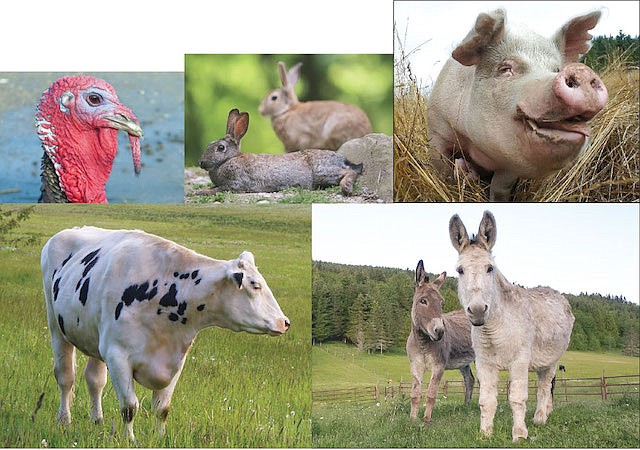 Some of Precious Life Animal Sanctuary rescue stories include: Taking in a rogue flock of turkeys
that had been stalking the streets of the tourist town, La Conner. When a council member suggested
the flock be used as targets for a youth gunfire-safety course, the mayor and townspeople spoke
passionately in support of the turkeys (which had become a bit of a tourist draw). The Turners
came to the rescue and agreed to provide long-term care and allow the turkeys to live out their
natural lives in the sanctuary. “They are intelligent animals, loyal to one another, and easily
recognize their caretakers,” states the sanctuary website. Another rescue came when domestic
rabbits that had for years been discarded at Seattle’s Lower Woodland Park and other parks needed
to be relocated. The trapping ended with over 100 rabbits captured. Precious Life Sanctuary was
the only sanctuary willing to help. A one-of-a-kind bunny-proof enclosure on over half-an-acre
was created. Wilbur the smiling pig was rescued at three months old from experimentation at
a university swine center and is free to explore in tall grass and root-n-roll in mud. Casper, the
paralyzed male dairy calf rescued shortly after his birth, was nursed back to health and spends his
time in the large pasturelands with the other cows—including his best friend Tiny—horses, burros
and mule. Margarita the burro was rescued from being sold to a fox and mink fur farm for food.
She could barely walk and was severely underweight. It was a surprise when she gave birth to a
baby boy (Paco). The gentle Margarita has received extensive care and now enjoys her life with
plenty of grain, apples and alfalfa.

On the outskirts of Sequim, next to the Olympic National Forest and near Olympic National Park, lies a hidden valley surrounded by forest, wildlife and views of the Straits of Juan de Fuca. This special place is the Precious Life Animal Sanctuary.