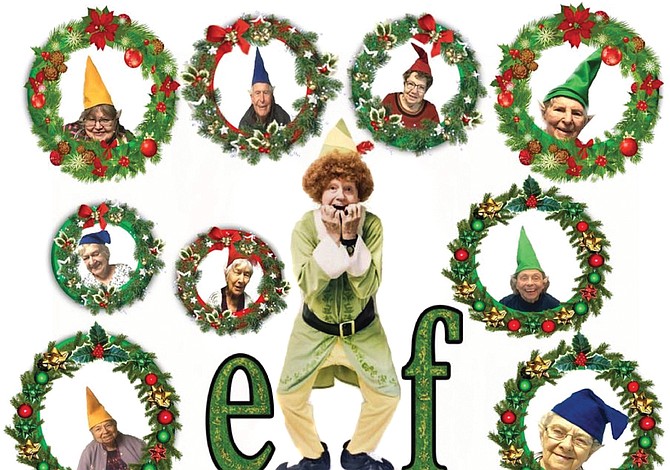 Jennifer Angell is the mastermind of the calendar project that gives local seniors the full Hollywood treatment. She does all the make-up, costuming and takes the photos. This 2020 takeoff on the movie “Elf” features Bill as Will Ferrell’s title character. Bill is one of dozens of residents at Spiritwood at Pine Lake retirement community to pose for the calendar project that benefits the Alzheimer’s Association.

Seniors at a local retirement community are dressing up like Hollywood stars. For the last three years, residents at Issaquah’s Spiritwood at Pine Lake have had the full Hollywood treatment—including elaborate makeup and costumes—all for the sake of gracing the pages of best-selling calendars to benefit the Alzheimer’s Association.

“The project came about because I was looking for a way to earn more for the organization,” says Jennifer Angell, community relations director at Spiritwood. “We’ve had many benefits at the community to support that cause and I am always on the lookout for something unique.”

Jennifer is the mastermind behind the project. “I costume, photograph and provide the makeup for the residents,” she explains. The seniors are delighted to participate in the major makeovers that make them look like celebrities.

Over the years, star turns have included Marilyn Monroe, Tom Cruise in Top Gun, Queen Elizabeth, Alfred Hitchcock, Liza Minelli in Cabaret, the crew of Star Trek, the famous candy factory scene from I Love Lucy, Marlon Brando from The Godfather, and so many more.

The original inspiration for this unique project came when Jennifer noticed a strong resemblance between one of the residents and Katharine Hepburn. She thought to herself how fun it would be to dress her up like the iconic movie star.

And then, why not dress up even more residents like Hollywood celebrities? Taking their photos, creating calendars and selling them to earn money for the Alzheimer’s Association was the logical next step for Jennifer.

Spiritwood residents were transformed into iconic characters from the original “Star Trek” for the 2020 calendar, photo by Jennifer Angell.

The project started in 2018, resulting in 2019’s calendar with its recreation of famous movie posters. Other photos have reinvented scenes from TV series.

“In wake of the pandemic, I am only doing single photos this year instead group shots like years past,” explained Jennifer.

Jennifer had no idea the project would take off like it has, garnering attention from around the country. The calendar has been covered on CNN, the Good News Network, The Kelly Clarkson Show and Access Hollywood, to name only a few of the media stories. Jennifer remembers how the residents “went crazy” when Access Hollywood’s host, Mario Lopez, said the name of their community on TV. “The reaction has been fantastic,” she exclaims. “We’ve been getting letters from all over the country.”

The theme of the 2021 calendar is “Famous Faces,” featuring residents who are look-alikes to famous individuals. In this photo by Jennifer Angell, Carla poses as Eleanor Roosevelt.

During Jennifer’s recent appearance on The Kelly Clarkson Show, she was presented with a “National Award for Kindness” and a check for $1,000 to go toward the cost of more costumes.

The start of all this attention was a bit of an accident.

Jennifer, who is always looking for uplifting stories— especially since COVID upended everyone’s lives— sent the Good News Network a video of residents singing the national anthem at a “virtual ballpark visit” and she accidentally attached a picture of the calendar. The news outlet skipped over the video and instead wanted the calendar.