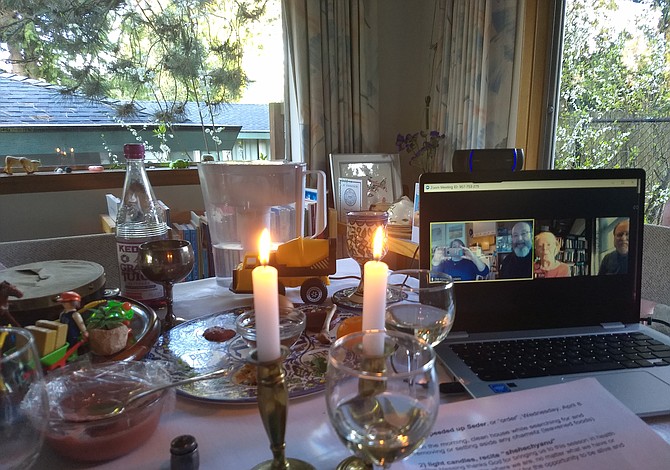 When Joe read the Four Questions in Russian, the two birds showed up. Red-breasted robins, large fat ones, flew screeching, as I remember it (a sound typically given by those defending nests or fledglings), past our kitchen window and on past the dining room. One continued on past, veering to the south, but flying somewhat erratically, not straight, calling out all the while.

The other, larger, bird perched on our fence, not 12 feet from the glass patio door, and fixated on the scene inside with its beady left eye. What could it see? Candlelight, me, Joe, the laptop open on the table with the images of our Seder friends on the screen, Joe holding a book open with the Cyrillic characters. I had just finished the Four Questions chanted in Yiddish, and before I chanted them, Joe’s colleague Fred had sung them beautifully in Hebrew.

But the bird stopped to listen, so it appeared, to the Russian version, and perhaps to see us using Grandma Weinberg’s damask tablecloth and her Pesadikeh dishes, bought well after WWII, rimmed in gold, glittering perhaps in the candlelight. Then the bird flew off, confidently, apparently satisfied, in the same direction as the first had fled.

And I thought of my grandparents of the gold rimmed dishes, who after the pogroms fled the shtetl for the big Russian cities, and after the Russian Revolution fled Odessa for France, and just before the Nazi invasion of Paris fled to New York, and I myself who fled the teeming cities of the East and continued Westward, to the suburban open spaces of Seattle, where a bird is just a bird, unless it still longs for its native tongues.

Joan Rudd transplanted herself to the Pacific NW from New York to go to college more than fifty years ago. She is a visual artist and a first generation American who started writing up her stories in 2003 and continues to do so.