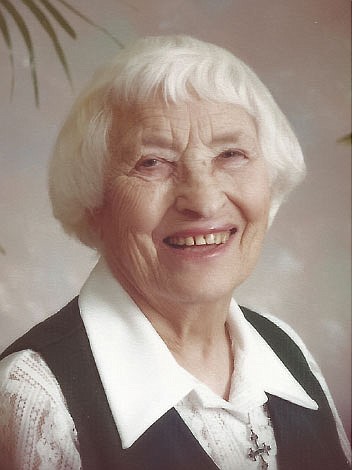 By Pearl Towne Reece, as told to Colleen L. Reece

I picture her as I saw her over 60 years ago: the “Little Grandma” sitting in her rocker by the big front window with a never-ending mountain of stockings to mend. She was the heart of our family of seven boisterous children, whose lessons endure.

Barely five feet tall, she and Grandpa Albert, six-foot-three, came to western Washington in 1902. Darrington had seven saloons, one small trading post and fifteen children for the one-room school. Grandpa Towne had fought in the Civil War. When he returned to Michigan after the war, he chose a different fight—promoting brotherhood. Grandpa became a minister. The family moved to Darrington, huddled in dark forests where mountain lions and wolves sometimes followed children home from school during cold, hard winters. Grandpa and the Little Grandma built the first church.

After Grandpa died in 1914, Grandma came to us. Her thirteen years in our home spanned our childhood, teen years and until most of us were married. Mama worked out of the home, so Grandma became an ever-present symbol of love and security, always there when we came home from school, parties or church. She took the job no one else wanted—darning stockings for the ten of us—and never complained. She wove the yarn so skillfully that her patches never rubbed busy feet. She also mended our childish hurts and woes.

I awakened a few weeks ago thinking about the Little Grandma, perhaps from hearing my grandson tell his wife about the ten years he lived with my own family. He sometimes came home from school through the snow. When he saw the light in the window and smelled fresh-baked bread or rolls, even the worst day improved. Grandpa and Grandma were waiting. All would be well.

For a moment I was a child again, rushing home from school to the love and warmth resident in that old rocking chair. Words from another era echoed through my mind. As a teenager, more than sixty years before, I wrote a poem to show the Little Grandma how much I loved her.

“Seated there beside the window in that dear old rocking chair

Is my Grandma, darning stockings. and she sorts them pair by pair.

She is sweet and true and gentle and she has a tender smile,

Always kind and ever willing, even when she views that pile.

She knows that ere the week’s out, those same socks again she’ll mend,

Yet she’s always kind and patient, her dear help again to lend.

Those that never will need mending, or need darning—who can tell?

Even though there’s no more stockings, for that’s not why she came.

We just want her here to cherish for we love her silver locks,

But if she’s happier darning, she’s welcome to the socks!”

Grandma laughed until she cried, then carefully tucked the poem away among her treasured memories.

Years have passed. Now I have silver locks just like Grandma’s. The world has survived wars, depression, prosperity and tragedy. Yet some things never change. There are simple golden strands that may prove more important and valuable than whatever else the world may offer. What can bind the generations more closely than:

• a welcoming light in a window

• the security of knowing someone who cares is waiting

• the aroma of bread or rolls fresh from the oven

• or a Little Grandma rocking by a window with her basket of mending nearby?

Author’s note: Mom lived to be almost 96. She proofed and edited my writing for twenty years and was looking up Scriptures for a devotional book until just before she “graduated.”