Discover a mystical lunar landscape at Craters of the Moon 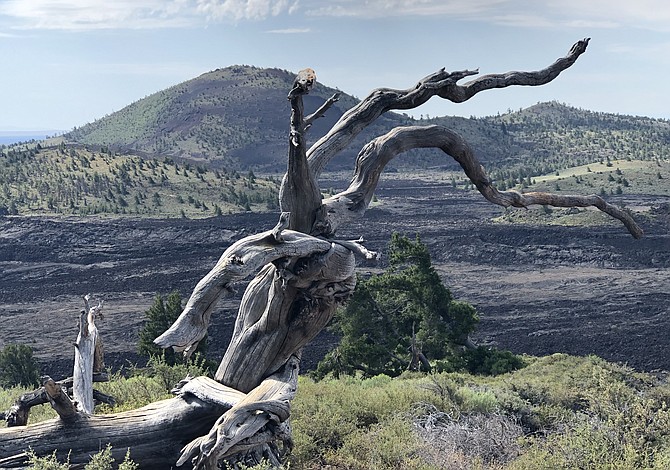 I’m in an otherworldly place that looks like somewhere the lunar lander would have been roaming around on a research mission. Pitch-black lava fragments are scattered amid a sea of cinders, mini volcanoes rise up from the barren terrain and dark, forbidding craters combine to create an eerie and starkly beautiful environment.

Craters of the Moon National Monument and Preserve is a unique landscape that was shaped during a series of major eruptive periods between 15,000 and 2000 years ago. One of four national parks in Idaho, it encompasses over 1,100 square miles, which is about the size of Rhode Island. The monument alone preserves about 53,500 acres of volcanic formations and lava flows on the northern rim of the Snake River Plain in southcentral Idaho.

There are three lava fields within the monument and preserve, offering an impressive array of basaltic lava, as well as tree molds, lava tubes, spatter cones and many other fascinating features. These fields are located along the Great Rift of Idaho and provide prime examples of open rift cracks in the world, including the deepest known on Earth at 800 feet.

At the visitor center near the monument’s only entrance, you’ll find displays along with a short film about the geology of the area. It’s a good place to start before heading out on the seven-mile, self-guided Loop Drive. From this road, you’ll have the opportunity to explore the environment, with access to trails that offer close up views of the volcanic formations. Stops are well-labeled with interpretive displays.

When you reach the North Crater Flow, take the short path to cross one of the most recent lava flows, which occurred about 2,200 years ago. There’s a purplish tint to this lava due to tiny pieces of obsidian in it. You’ll also note that some of the lava looks like thick roots. This is called “pahoehoe” lava, which means ropey in Hawaiian. There are also large crater wall fragments that were violently torn away when the volcano’s crater ruptured.

Devils Orchard is an apt name for this group of cinder cone fragments that stands in a field of cinders like grim reapers. They, too, broke off during an eruption. Take the paved loop trail through the formations and among the trees of the “orchard.” Signs along the way help make visitors aware of human impacts to the area.

The Inferno Cone Viewpoint sits atop the infamous 6181-foot-tall Inferno Cone. It’s a massive heap of cinders with a distinct flat top. Climb the short, but steep trail for a rewarding 360 degree panorama of the entire monument. To the south are the Spatter Cones and a chunk of the Great Rift, while further away is Big Cinder Butte, one of the world’s largest, completely basaltic cinder cones. And beyond is a series of mountain ranges.

At the Big Craters and Spatter Cones stop, you’ll learn how the latter are created from globules of liquid hot magma, which are ejected from the volcano and then fall down around a small central vent. Landing on top of one another, they cool and adhere to nearby pieces to form the walls of what is akin to a miniature volcano.