Village Theatre’s “I Do! I Do!” Presents A Well Produced and Acted Sixties Vision of Marriage 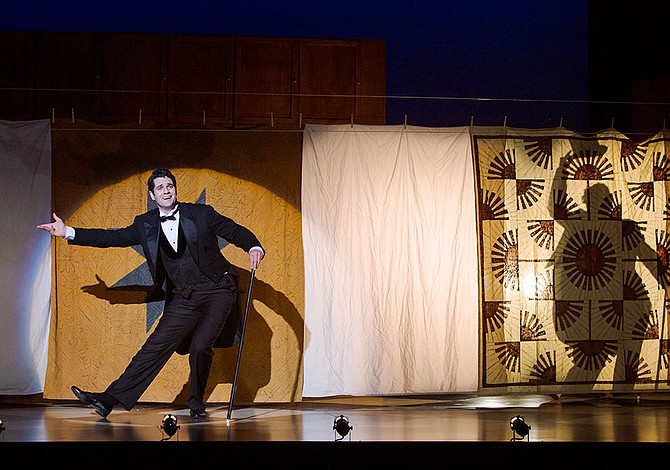 Peter Saide (Michael) and Kendra Kassebaum (Agnes) in Village Theatre's "I Do! I Do! " Tracy Martin

Village Theatre’s latest offering I Do! I Do! is a beautifully staged and acted looks at how people perceived marriage in the 1960’s when it was a Broadway hit. Although somewhat past its prime, the show moves through fifty years of one couple’s relationship from 1895 to 1945. That simple fact is not quite obvious in the performance, but the brilliant acting, singing, music and staging make this production entertaining despite the fact that the view is a bit hackneyed.

During the course of two hours, Agnes and Michael hold the audience’s attention singing and dancing as well as making several costume changes (some visible to the audience as the dialogue continues) with a dexterity that makes this show both interesting and entertaining. This is especially true when Michael, played by Peter Saide, dons a tux, top hat and cane to dance and sing while gliding across the stage. At the same time Agnes, played by Kendra Kassenbaum, mirrors his dancing in shadow behind a curtain.

Although somewhat past it’s prime, show’s big musical number My Cup Runneth Over was a pop hit in 1967 for Ed Ames, and it clearly reflects the show’s perspective that marriage is an institution that is rewarding and something that people should strive to be in “until death do us part.” Very sixties.

All in all, I Do! I Do! provides an entertaining two hours of theatre, especially if you’re a couple who has been married for decades and are looking for validation in your relationship choice. Personally, I’d have loved to see the show updated into this century and staged with two gay men.

I Do! I Do! runs through February 24 in Issaquah before moving to the Everett Performing Arts Center from March 1 - March 24.