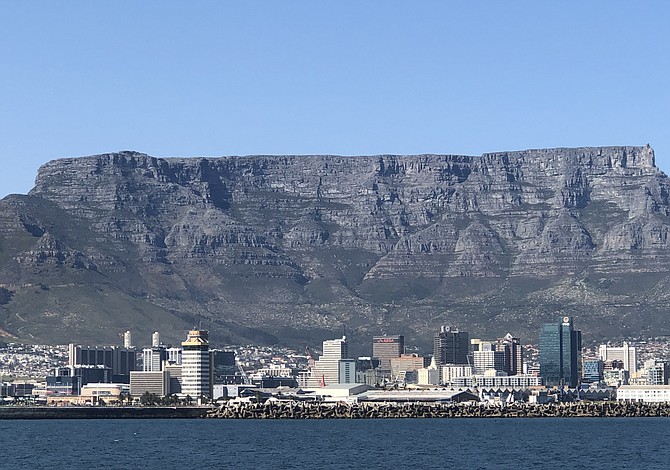 There’s nowhere quite like Cape Town, the jewel of South Africa. This fascinating city is a meld of cultures, history and landscape, crowned by the magnificent Table Mountain. Often regarded as synonymous with the “Mother City,” (Cape Town’s affectionate moniker), this landmark is the single most welcoming icon to its people, as well as to travelers from around the globe. Named a New Seven Wonders of Nature, the mountain is one of the oldest on earth, six times older than the Himalayas and five times older than the Rockies. It forms part of the Table Mountain National Park, which extends all the way to the Cape of Good Hope, the most southwestern extremity of Africa.

Table Mountain’s main feature is its level plateau, edged by impressive cliffs. Flanked by Devil’s Peak to the east and by Lion’s Head to the west, the plateau creates a natural amphitheater, offering a spectacular backdrop to Cape Town. Its relative flatness is due to the fact that it is a syncline mountain –the summit as we see it was actually once the bottom of a valley floor, likely worn away by the sea.

The mountain has been the subject of many stories, particularly with regards to its famous “tablecloth.” This meteorological phenomenon, which causes clouds to drift down the mountain slopes like billowing fabric, rendering the top invisible, is attributed to a number of myths. One popular legend tells of a Dutch pirate, Jan van Hunks, who supposedly challenged the devil to a smoking contest that persists to this day.

To experience the mountain’s panoramic 360-degree views, you can hike to the summit along one of its trails or if you don’t want to break a sweat, opt to ride the rotating Table Mountain Aerial Cableway. Once at the top, a series of pathways lead in different directions, offering unbridled vistas of the bustling city, the Atlantic seaboard and Camps Bay to the Cape Flats and Hottentots Holland Mountain Range. Along with the views, you’ll get the opportunity to take a closer look at the area’s rich biodiversity, which boasts several thousand species of plants, many that are endemic to the mountain.

The mountain is also an adventure playground with plenty of adrenaline-pumping activities available. Follow the lead of the locals, who take full advantage of this landscape by mountain biking, tandem-paragliding off Lion’s Head, rappelling off the summit, trail running and more.

For another Edenesque setting, check out Kirstenbosch Botanical Garden on the eastern foot of the mountain, located in the heart of the Cape Floral Region. The Kirstenbosch is the first botanical garden in the world to be included with a natural World Heritage Site. Spanning eighty-nine acres, the place is a veritable feast for the senses and a favorite of locals and visitors alike. This internationally acclaimed living museum celebrates the floral riches of southern Africa. Theme gardens focus on useful and water-wise plants, plants with scented flowers, aromatic leaves or unusual textures, succulents and bulbs, annuals, proteas, fynbos and ancient species that have survived almost unchanged since the time before dinosaurs roamed the earth. As you stroll the grounds, keep your eyes out for the exquisite African stone sculptures scattered throughout the kaleidoscope-colored landscape.