Find a Trail to History 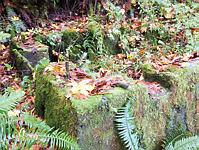 By walking a trail near her home, the author embarked on an exploration of the history of her community. One of her discoveries was the remnants of a locomotive turntable

When we first moved to Bellevue from New York City in 1981, I could put on my hiking boots, walk out the front door of our Northwest style home, follow a deer and social trail under the power lines, bushwhack through a small wetland and arrive at a trail into history. It seemed strange to be wearing hiking boots in the suburbs, but what I found on the trail was far more discordant.

Ever since the move from a row-house in Brooklyn, I had felt disoriented—as bewildered as the deer walking down the middle of our street one day. How to feel grounded in a new home in a planned subdivision, bordered by lawns and landscaped shrubs that replaced trees, asphalt and concrete that served cars but not meandering? I searched for grounding in the land and history.

On dog walks, I had seen a weathered wooden sign proclaiming “Redtown, 3.0 miles.” Strapping the ten essentials on my back, I set off to explore. The trail followed a creek through a ravine. It offered simple pleasures: songbird calls, rocks smoothed by centuries of water, waterfalls from modest heights and a blackberry-studded meadow where the trail ventured upland. Houses crowded the top of the ridge on the left and traffic rushed by on the parkway on the right, but in this narrow ravine, they were unseen and unheard.

The signs of history were subtle at first—chunks of coal and bricks in the stream, a curiously wide and graded trail raised above the fern-covered floor. They became unmistakable—a rusted iron axle and wheels chained to a tree, a large concrete slab overgrown with ferns, labeled “locomotive turntable.” Chunks of concrete lined the creek in places, water flowed over wooden planks near a waterfall, seams of coal were visible in its banks.

Near the end of the three miles, I came to a dark mouth in the earth. A railed fence blocked off an airshaft 100 feet deep into a coal mine under my feet. I was standing in the heart of the “Pennsylvania of the West.” Nearly 11 million tons of coal were dug from these hills, from the 1880s through the 1920s. This was an industrial complex, dirty and dangerous, thick with coal dust. Right out my front door. 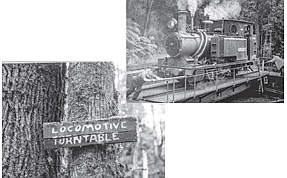 Behind me, along that wide, level grade I’d been walking, were the narrow gauge tracks of the Seattle and Walla Walla Railroad, which never reached Walla Walla but did bring coal from the mines back to Lake Washington. That creek I’d been walking was covered with wooden planks to try to keep water out of the mines. The coal along the trail was debris from the bunkers where old men and young boys sorted the coal. The meadow above the trail was the townsite of Coal Creek, with hotel, school, ticket office and depot, miners’ houses and a saloon. The end of the trail was across Lakemont Boulevard at Redtown, site of the company town and the Ford Slope mine, most productive in the area generally known as Newcastle.

The history was there to be found because residents and city planners gifted with foresight and persistence had preserved it. The Issaquah Alps Club formed in 1979, named by Harvey Manning after the string of mountains

older than the Cascades: Cougar, Squak and Tiger. For years, members sponsored “Return to Newcastle Days” and led tours of the mine sites. They persuaded the King County Council and King County executives Randy Revelle and Tim Hill to create Cougar Mountain Regional Wildland Park. Since plans were finalized in 1990, King County Parks has constructed trails, placed interpretive signs, and struggled to keep up with the park’s popularity and demands for parking at the trailheads.

They made it easy for me. How can you trace a history trail in your community? Curiosity will take you far.

summers looking for an “Indian Corral” named and marked with an X on a map—and found it! Names, such as Coffee Pot Springs, are also clues. What was that coffee pot doing there?