Anna speaks about her experiences at an event on June 27 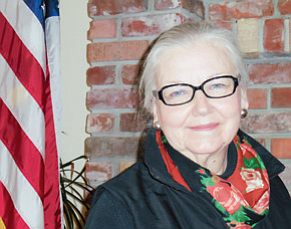 When I heard that one of our volunteers at the Des Moines Senior Activity Center was a Polish woman born in a Nazi Germany prison camp, I had to meet her and hear her story. But maybe she didn’t want to talk about it.

How wrong I was! She immediately started telling her story, words tumbling out so fast I could hardly keep up.

“In my family’s state, Volynai, in east Poland (now Ukraine), my father was in the Polish Army Reserve. It was 1939, Germany had invaded Poland. As the Germans took over the town, Jews and gypsies were rounded up and sent to the train station to be relocated. Those families, many our friends, disappeared.

Toward the end of September of 1943, an order came to report to the train station or stay and be killed by the Ukrainian terrorists. My parents chose to leave. The terrorists targeted not only Polish people, but also community leaders. My father was arrested and executed…or so he thought. As he lay in the ditch, covered in blood, with bodies piled around him, he realized he was still alive. The soldiers left eventually and my father managed to pull himself out of the mass grave. It took a long time for him to make his way back to his family. My mother described him as a walking skeleton.

Thinking the Germans had promised work, my parents and their three children boarded the train. Mother was pregnant with me, but didn’t know it yet. They were loaded into boxcars. It was crowded with a hole in the floor for a toilet. After two weeks with no food and very little water, they arrived in Dachau concentration camp.

The men were separated from the women and children. During the months that followed, my father was getting weaker every day on the meager rations. Father knew that to survive, he needed to have work assignments. Every day the men were required to stand at attention and they were kept standing for a long time. If you fainted or fell down you were dragged away. He prayed he could remain standing. He was so weak he fell to one knee as soon as they were dismissed. This is the end, the thought. But he was told to meet his family at a truck and they were taken to Rosenheim labor camp. During the months that followed, my father and mother worked at repairing roads and bridges in the Rosenheim area.

I was born on May 1, 1944, in Rosenheim. My mother was taken to the annex of the regular hospital, the one for the laborers that was also where medical experiments were done. My mother remembers it was a beautiful, snowy day. She watched as I was washed in cold water straight from the faucet and placed on a bare table – no cover. I was supposed to be left there for the rest of the day, untouched, for experimentation. Suddenly the air raid sirens started and the doctors left. A kind nurse wrapped me in a blanket and brought me to my mother. “I am afraid she will die before she has a chance to be baptized,” my mother cried. “Oh, I can fix that!” So the nurse took me to the village church. I was baptized and named Anna by the nurse, her own name!