Enchanting Prague and beyond 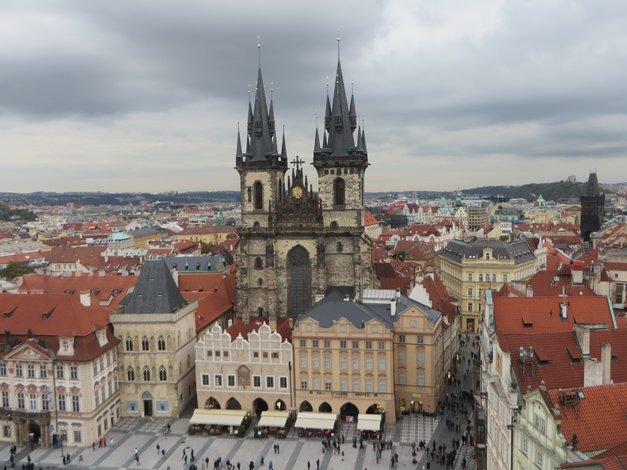 History comes alive on a visit to the Czech Republic. Photo by Deborah Stone

Prague is regarded as a medieval jewel. Photo by Deborah Stone

No Czech city has been written and talked about as much as Prague, the country’s picturesque capital. It’s a magical place where history comes alive and the mysteries of the past are revealed through the town’s uniquely preserved historical center. A UNESCO World Heritage Site, Prague boasts Romanesque chapels, Gothic cathedrals and Baroque palaces and gardens, making it a showcase of architectural masterpieces dating back centuries ago. Nicknamed “the city of a hundred spires” for its numerous towers, this European capital is regarded as a medieval jewel.

Prague is not merely a pretty face. It has the cred to back up its claim to fame. This is the city where the most influential men in Europe came together – rulers, generals, alchemists, Jewish scholars, writers, artists and musicians. It was here that Rabbi Loew is said to have brought the clay Golem to life; Giuseppe Arcimboldo created his unique portraits from fruit and vegetables; Franz Kafka put pen to paper and wrote his seminal works, Galileo, Copernicus and Kepler made their astronomical discoveries and the compositions of Mozart, Smetana, Liszt and Dvorak were met with thunderous acclaim.

With its compact center, Prague is easily explored on foot. Photo by Deborah Stone

All of the major highlights of this fairytale city can be explored on foot via ancient cobblestoned streets. One of the must-see sights is Prague Castle, the largest medieval castle complex in the world. It’s home to the Old Royal Palace and nearby St. Vitus Cathedral, as well as serves as the seat of the president of the Czech Republic and the burial place of the most important Czech rulers and saints. You’ll be dazzled by the richly ornamented frescoes, statues and semi-precious stones adorning the 14th century gothic cathedral, which glistens in the sunlight. Hard to believe that such a grand project was completed using only hand labor!

Prague Castle is a highlight for visitors. Photo by Deborah Stone

The country’s most valuable historical artifacts, world famous paintings and hand annotated manuscripts by many of the greatest composers of the 17th are carefully safeguarded within the castle complex, along with the Bohemian Crown Jewels and St. Vitus Treasure. Time your visit to see the ceremonial changing of the Guard at noon and make sure you catch a midday classical music concert in the Lobkowicz Palace for the full experience. You’ll feel like privileged nobility as you sit in the palace’s exquisitely decorated 17th century Baroque Concert Hall while listening to works by Vivaldi, Bach, Mozart, Bizet and others. Then head outside and walk through the lovely terraced gardens beneath the castle before ambling down the steep, narrow streets and winding alleys of the Lesser Town. 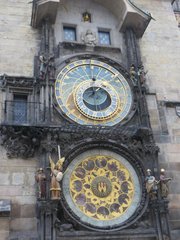 The Astronomical Clock in Prague's Old Town Square is a visitor favorite. Photo by Deborah Stone

Your visit to Prague should also include a stop at the Old Town Square, the true heart of the city, with its famed Old Town Hall and Astronomical Clock. The clock, which has adorned the façade of the building since 1410, is equipped with a mechanism consisting of statues of the twelve apostles. Every hour, a skeleton symbolizing death inverts an hourglass and pulls a rope, which opens two windows where you’ll see St. Peter leading a procession of the apostles. Then there’s the crowing of the cock and subsequent chimes to note the time. The clock also shows the movement of the sun and moon through the signs of the zodiac. At the top of the tower is a viewing gallery, offering a spectacular bird’s eye perspective of the entire city. From this vantage point, you’ll be captivated by a panorama of spires, domes, towers and colorful red roofs as far as the eye can see.