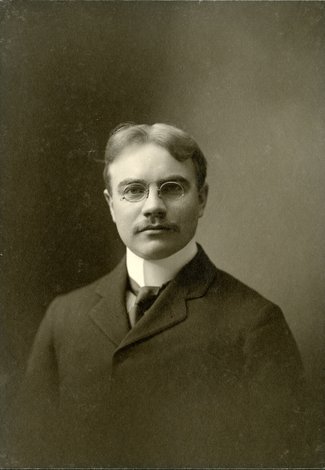 Aware of buying someone’s secrets, I pondered if I had the right to read the diary. I found the book’s intriguing inscription, (most likely written in jest), irresistible. In this book are recorded my evil deeds, but only for one year. C.S. Brown, 1899, Bowdoin College, Brunswick, Maine.

Who was C.S. Brown and how did a diary from Maine end up in the Pacific Northwest? The tantalizing journal, written over 100 years ago proved to be a challenge to decipher as every page was filled with cryptic fountain pen script, jerky slashes and dramatic squiggles. I wondered if the author ever considered the possibility someone might read his personal thoughts; how many people held the diary over the years and if anyone took time to read it.

Exploring the college’s website, I discovered the author of the diary was Charles Stanley Brown. His unforgettable journal is filled with academic struggles, college mischief and the pursuit of love. As a junior at Bowdoin College in Brunswick, Maine, Charles hopes to write a best-selling novel, graduate from Harvard and find a wife. A highly intellectual, dramatic and emotional poet, Charles falls in love frequently. Although he boasts of being intellectually superior, he admits he is cynical, humorless, and egoistical. The greatest mischief that I have made since I came to this college was when I moved into this damn place, with these damn people.

For eighteen months I lived in Charles’ world. As I read his thoughts and researched his life, the story evolved into a book. I didn’t realize how much I would miss spending time with him until I shared the end of his story with my fellow writers. As I read to them how Charles died, I found myself fighting back tears. How strange it felt to be grieving for someone I never met, someone that passed away 85 years ago.

I had no idea that buying Brown’s diary would change my life. It became a full time hobby for two years and fulfilled my life-long goal of writing a book. In celebration of my 70th birthday, I’m pleased to announce that Charles’ Tell-Tale Diary of 1899 is available on Amazon. Learn who he married, what he did for a living, where he lived and how he died. Discover how a diary from Maine ended up at a swap meet in Packwood, Washington.