Ready to rumble? Try being humble. 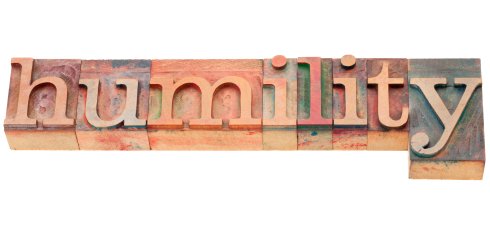 Some days it seems like a smack-down kind of world. While driving to work I came upon a bicyclist being pursued by a car with its horn blaring. I pulled in behind them as we all approached a red light. It didn't look good as the tension escalated.

Heated words were lobbed between the driver and rider now glaring through the passenger window; fingers pointed in accusatory manners, gestures made and heads shaking. It got pretty intense before the driver turned left and sped down the street. No victors in this skirmish.

So much for manners, not to mention brotherly love! It was one of those in-your-face moments that proved to me once again giving someone a piece of your mind doesn't really accomplish peace of mind.

The incident got me thinking about humility, civility, and respect, qualities not generally embraced in today's "take no prisoners" culture. "Such is the state of American civility," writes Mary Beth McCauley for The Christian Science Monitor, whose story highlights the personal and international ramifications of the etiquette gap as "individuals – increasingly, it seems – defy convention and claim the right to define their own behavior."

So what's wrong with a constant stream of rudeness? For one, it's not so healthy. Negative emotions and their corresponding stress produce many adverse physiological effects. MebMD lists a variety of health related issues surrounding stress, such as heart disease and accelerated aging. Other studies suggest a link between good health and qualities like optimism and happiness.

Danielle Ofri, M.D. points out in her latest article for The New York Times that lack of respect in the attitude of health professionals creates an unhealthy hospital environment. She questions the tolerance of a disrespectful culture in her profession when such a disposition is causing the same harm as medication errors and surgical mistakes.

Evaluating our attitudes can be helpful when considering healthy bodies and minds. Studies seem to be advancing the notion that sustained mental negativity is the enemy of well-being.

"We have met the enemy and they are ours." It would be nice to be able to proclaim that in light of the all the negativities that confront us personally and collectively. Actually, Commodore Oliver Hazard Perry wrote those words after the Battle of Lake Erie during the War of 1812. The 200th anniversary of the battle will be observed this summer at Put-In-Bay, Ohio.

Perry was hot-headed. According to actor Jeremy Meier, who portrays Perry in a one hour dramatization, the Commodore had quite a temper. A monument stands in Perry's honor at Put-In-Bay, not a memorial to his character flaws, but a celebration of peace. Perry's Victory and International Peace Memorial is one of the tallest in the country and part of the National Park Service. The world's largest Doric column was erected "to inculcate the lessons of international peace by arbitration and disarmament." It symbolizes the uninterrupted peace between the United States and Canada which share an undefended 4,000 mile border, the longest of its kind in the world.

There is a lot to be said for peaceful borders. The mutual respect between both countries has proven beneficial to its citizens. It provides a lesson for personal interactions too. A "scorched earth" approach is not the best way to conquer our foes. A more permanent means to peaceful encounters includes truly listening and a deep felt appreciation for others and their stories.

Maybe it comes down to that unique human quality of humility. The Bible records Jesus as intimating that there would be a reward for loving our enemies. Alongside the benefits of a peaceful life, could we also gain better health?

"Humility is strong—not bold; quiet—not speechless; sure—not arrogant," wrote Estelle Smith. A more unpretentious stance in dealings with others can be our monuments to peace. It's not always easy... controlling our thoughts and impulses. But it's worth the effort. Perry's battle flag encourages us, "Don't give up the ship."