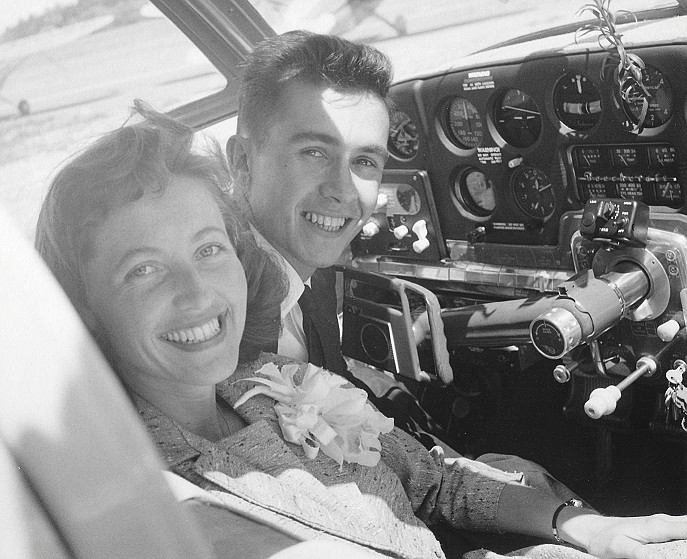 Pat D'Amico with her husband on the "Honeymoon Express"

Just once, with a tail wind full of youthful exuberance, I flew solo in a single engine airplane. (No kidding!) My flight lasted about half an hour. It ended my yen to be a pilot.

It was in the late fifties. My soon to be husband, Jack, had earned his pilot's license when he was fifteen. He had been flying for at least ten years by then and knew the precise and unforgiving nature of aviation. He had more than a little trepidation about my plan.

I was teaching school in Ballard. He was working in downtown Seattle. Two afternoons a week, I drove east on the Sunset Highway (I-90) and made a left turn into the Bellevue Airport (about where Eastgate is now) to meet my instructor, Cully, a calm and confident man.

My lessons were in an Aeronca Champ. It was a high wing two-seater, one behind the other. Cully had a second set of controls in the back seat. There was no wheel. It had a stick, rudders and a throttle.

I got the hang of it right away. I felt like a ballerina-every brain cell and muscle in concert. A power surge into the air; level out; graceful turns; throttle back; pull back; touch down; taxi to a stop; take a metaphorical bow. Glorious, when Cully had my back.

The airport was small and casual. The telephone was available to anyone. Jack would often call to check on my progress and be sure that I was safely on the ground.

I was merrily doing touch and go landings one day when Cully asked me to come to a full stop and he got out. HE GOT OUT!

He said, "I want you to take off and land three or four times." He must have read my frozen face.

"You're ready," he said, and he slammed the door shut. Okay, full throttle, here I go! I looked down at a church and sent my prayers flying too.

While I was up and my confidence was down, Jack made one of his regular calls to the airport. He asked to speak to me. The voice on the phone said, "She's flying. Just a minute, I'll let you talk to Cully." A stress bomb went off in downtown Seattle.

To bring a quick and merciful end to this story and my flying aspirations, I managed three touch and goes and decided in that interval that I was not cut out to be a pilot because I was scared spitless.

We got married a few months later in my hometown of Bellingham. We flew to Bellingham in Jack's airplane and rented a hangar the day before our wedding. We knew the airport staff well because of our many visits to my parents. Our friends and the airport conspirators painted "Honeymoon Express" in large water paint letters all over the airplane. When we approached Boeing Field, Jack went through all the landing pattern protocols with the tower. As we made the final approach, the tower operator said, "Cleared to land Honeymoon Express."

I learned enough so that I could probably get us down if something happened to Jack, but it wouldn't be pretty.

Many years ago, my husband was away on a business trip for ten days. A lady in the building where he was working kept flirting with him in the elevator. She finally slipped him a note, which he wisely passed on to me. I responded with this…

MEMO TO A HANDSOME HUSBAND

Regarding the painted dolly

To find the correct thing to do

To respond to her offer to toast

With an after work drinky-poo.

A nice little note is required.

I’d write her and say she’s too kind

And so you have sadly declined.

And if for one teensy minute

Please note all the peril that’s in it— I look good in black as you know.

Mend a tool—bind a load—

I’ve heard it said in other homes

That those who have Y chromosomes

Are programmed so they can’t escape

And must, at all times, have duct tape.

While those whose chromosomes are X

Regard this as a bit complex.

But interference would be wasteful.

If it must be, let it be tasteful.

TAKE OFF AND LANDING

We landed at Boeing Field

The day that we were wed.

A voice from the tower said.

Then after a sixty year span,

On your Heaven bound flight plan.