Earlier this month, the Mariners once again won titles in the ‘Age 65 & Over’ division in the Men’s Senior Baseball League World Series in Phoenix, Arizona. 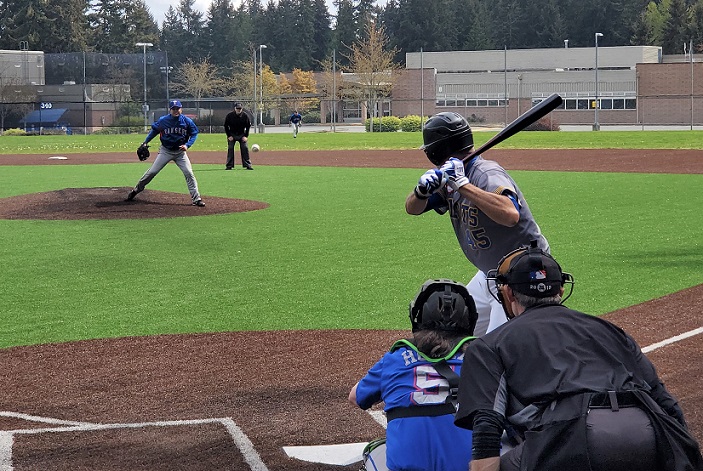 The Mariners lost to the Dragons earlier in the week during the Round Robin in an 18-15 shootout, so the re-match was expected to be anybody’s game to win.

As predicted, the title tussle was very close for the first seven innings, with the Mariners holding a narrow 4-3 lead. The Mariners pushed across two runs on four hits in the top of the eighth. Building on a 6-3 lead, the M’s took advantage of several hits, walks, and Dragons’ miscues to add four more tallies in the ninth.

Rick Filush was masterful on the mound picking up the win for the Mariners in a complete-game effort. He scattered eight Dragons hits while striking out two. Filush finished the week 1-1 with a 2.60 ERA and a 1.04 WHIP.

Other major contributors for the Mariners included Sam Ceci, who hit .542, and Randy May at .471. Glenn Kost provided more support with a .412 average along with Craig Armstrong who hit .375 for the week.

Puget Sound Senior Baseball League (PSSBL) divisions are organized based on age and skill level, ranging from advanced to recreational. Although the minimum age is 18, one of the divisions is exclusively for ‘Age 50 & Over.’ Two other divisions feature players ‘Age 60 & Over.’ Approximately 300 participants over the age of 50 are still playing hardball, including more than 200 in the 60+ category.

Formed in 1989, 2023 will mark the PSSBL’s 34th season of operation.  Games are played at high quality fields throughout the area, including Bellevue College, Bannerwood Park and various school district and park district diamonds.  The season runs from early May to Labor Day with local playoffs scheduled in September.

The PSSBL is affiliated with MSBL National, the organization that spearheaded the late-1980’s movement of adults getting back to playing baseball.  Each fall, MSBL hosts a national World Series across a number of age categories. Games are played at Major League facilities in the Phoenix, Arizona area.

Over the years, quite a few teams representing the PSSBL have won national championships. Recently, the Age 65 & Over Puget Sound Mariners scored back-to-back World Series titles, winning in 2021 and again in October, 2022.  Each Mariner player was awarded a World Series championship ring.

The league is always looking for new players, especially in the ‘50 & Over’ and ‘60 & Over’ age groups. Online registration begins in February and open tryouts are conducted in March. Information about the 2023 season will be available after the first of the year at https://pssbl.com.
While there are some ex-minor leaguers and college players in the PSSBL, there’s also plenty of room in recreational divisions for players who haven’t picked up a baseball since Little League. A number of women play in divisions, both advanced and recreational.
The PSSBL is well known for donating money, materials, and labor to youth and school baseball organizations around the Sound as well as other charities.  Make-A-Wish Alaska & Washington, Pacwest Little League, Pacific Little League, high schools such as Rainier Beach, Thomas Jefferson and Henry Foss, Bellevue College, Seattle U. Baseball, the ALS Association and the Wounded Warriors Project have all been recipients.
For more information, visit https://pssbl.com.
The information for this article was submitted by Tom Evans Krause, President, PSSBL