Friday at the Chicka- Boom-Boom

The ongoing life-affirming adventures of Rose and Dawn 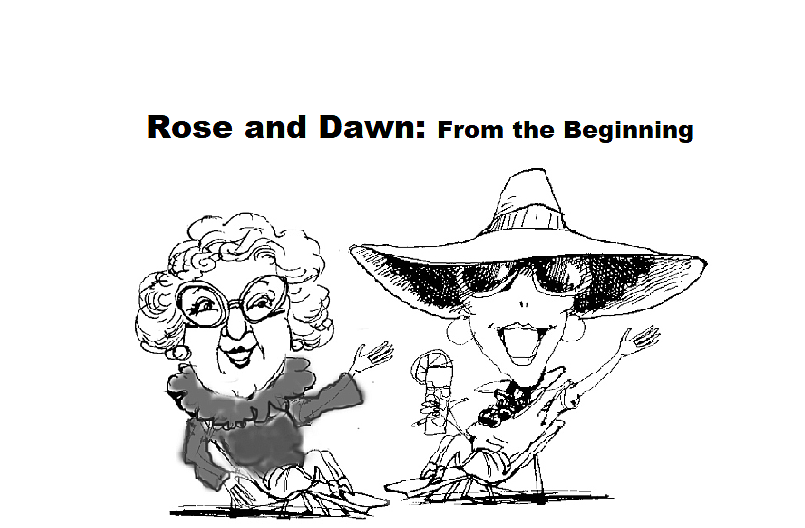 Say hello to Rose and Dawn

Meet Rose and Dawn all over again! Every other month in this online version of our publication, we will publish Diana Couture’s popular column starting from the very first story. Enjoy!

“Is today Friday? I can’t remember. Oh well, when you’re 80-something and in the ‘dinnertime’ of your life, you don’t have to remember these things,” Rose thought as she pushed her size 6 feet into her pink terry cloth slippers and shuffled to the kitchen to start the coffee.

She thought about how long her husband John had been gone. It hardly seemed like ten years since she had made her midnight trip to Virginia Mason Hospital for the final goodbye.

No sad thoughts allowed today! She and her best friend Dawn were going for a ride in her new car. Nowhere in particular….

She picked up Dawn at her home in Wallingford, where she lived with her daughter and her family in a lovingly built, “tricked out” mother-in-law apartment.

The two best friends started laughing for no reason as soon as they saw each other. They decided that the first stop would be for a latte…this is, after all Seattle.

They spotted a local stand with a welcoming sign, Chicka-Boom-Boom Latte. As they pulled up to order….EGADS!!! The girl barista hanging out of the window to take their order was wearing…well…not much.

Her perky breasts were dangling at just about eye level and seemed to be shaking a hello to them.

Dawn was so busy looking at the menu that she failed to notice. Rose was speechless.

The barista smiled and asked for the order. Rose poked Dawn and jerked her head to the left surreptitiously to indicate the direction her glance should go.

Dawn reluctantly tore her eyes from the menu and gasped for air as she saw the offending view in the window.

“Smooooth” was the only thing Rose could say. She looked back at the young woman and ordered the same with an almost detectable choke in her voice.

They were like a couple of shell-shocked veterans waiting for their latte order. They tried to be cool by looking around, looking anyplace but the coffee window. But they both knew that Rose was going to have to look again when she paid for the drinks.

With shaky hands, and averted eyes, Rose handed money to the girl. Rose jammed the cups at Dawn, fought with the gear shift to get the car into drive and finally pulled away from this den of inadequate clothing.

They had to pull over just moments away from Chicka-Boom-Boom to get themselves in order.

“Did I just see what I thought I saw?”

“Well, if I did, you did too.” Dawn replied. “Can they do that sort of thing without the permission of the City Council?” Rose asked.

“Rose, I can’t believe it. You’re worried about the City Council approval?! Good heavens. All I could think about was the cruel trick that gravity plays on us over the years. I just couldn’t believe that breasts could be placed that high on a human body.”

Silence. Obviously, they were approaching this issue from two different perspectives.

“Aren’t you worried about the corruption of our youth with shows of skin like this?” Rose asked.

“Youth, schmouth.” Dawn replied. “I can’t believe our breasts used to be like that. The things I carry around on the front of my chest have not the slightest similarity to those we just saw. Not the slightest!!! I know they’re the same things, but….I mean ….well….”

With lattes in trembling hands, the girls decided that another day might be better for joy riding. They’d had enough excitement for one day.