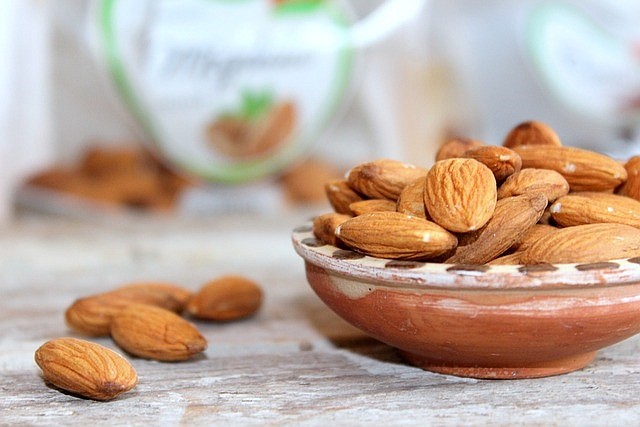 Eating a handful of almonds a day can greatly benefit your tummy because almonds significantly increase the production of butyrate, a short-chain fatty acid that promotes gut health, according to a recent study. A team of researchers from King's College London investigated the impact of whole and ground almonds on the composition of gut microbes.

The gut microbiome consists of thousands of microorganisms living in the gut. These play a vital role in digesting nutrients and can have a positive or negative influence on our health, including our digestive and immune systems. The mechanisms of how the gut microbiomes have an impact on human health is still being investigated, but evidence suggests eating specific types of food can positively influence the types of bacteria in our gut.

Researchers at King's College London recruited 87 healthy adults who were already eating less than the recommended amount of dietary fiber and who snacked on typical unhealthy snacks, such as potato chips. Participants were split into three groups: one group changed their snacks for 56 grams of whole almonds a day, another for 56 gram of ground almonds a day, and the control group ate energy-matched muffins. The trial lasted four weeks.

Researchers found that butyrate was significantly higher among almond eaters compared to those who consumed the muffin. Butyrate is a short-chain fatty acid that is the main source of fuel for the cells lining the colon. When these cells function effectively, it provides an ideal condition for gut microbes to flourish, for the gut wall to be strong and not leaky or inflamed and for nutrients to be absorbed.

No significant difference was observed in gut transit time, which is the time it takes for food to move all the way through the gut. However whole-almond eaters had an additional 1.5 bowel movements per week compared to the other groups. These findings, published in the American Journal of Clinical Nutrition, suggest eating almonds could also benefit those with constipation.

Researchers in the ALLIUM Phase 3 clinical trial showed that a combination of the drugs cefepime and enmetazobactam was more effective in treating both complicated urinary tract infections and acute pyelonephritis (AP), a bacterial infection causing kidney inflammation. It appeared to over benefits over the standard treatment combining piperacillin and tazobactam. Urinary tract infections are considered complicated when they are associated with fevers, sepsis, or urinary obstructions.

"It represents an exciting option for treatment," said lead study author Keith Kaye, chief of the Division of Allergy, Immunology and Infectious Diseases and a professor of medicine at Rutgers Robert Wood Johnson Medical School.

The trial was conducted at 90 sites in Europe, North and Central America, South America and South Africa from September 2018 to November 2019. More than 1,000 patients participated in the study. The researchers found that 79% of the patients receiving the new combination of cefepime and enmetazobactam were successfully treated for their illness compared to 59% of those receiving the conventional treatment of piperacillin and tazobactam.

The antibiotic cefepime is a fourth-generation cephalosporin that was approved for use in the 1990s and is available generically. Enmetazobactam, an experimental drug made by the French biopharmaceutical company Allecra Therapeutics, is a beta-lactamase inhibitor. More than 2.8 million antimicrobial-resistant infections occur in the U.S. each year, and more than 35,000 people die from them, according to a report from the U.S. Centers for Disease Control and Prevention (CDC).

Good News in the War on Cancer

Overall cancer death rates continued to decline among men, women, children, and adolescents and young adults in every major racial and ethnic group in the United States from 2015 to 2019, according to the latest Annual Report to the Nation on the Status of Cancer. From 2014 to 2018, overall cancer incidence, or new cases of cancer, remained stable for men and children but increased for women and adolescents and young adults.

"The findings in this year's Annual Report to the Nation show our ongoing progress against cancer, continuing a more than two-decade trend in declining mortality that reflects improvements in preventing, detecting, and treating cancer," said Dr. Monica M. Bertagnolli, director of the National Cancer Institute (NCI).

"Through funding scientific breakthroughs and raising awareness about prevention and early detection, we are making progress against a subset of the more than 200 diseases we call cancer," said Karen E. Knudsen, chief executive officer of the American Cancer Society. "However, for certain cancer types, concerning trends persist, and durable cures remain elusive for many people.”