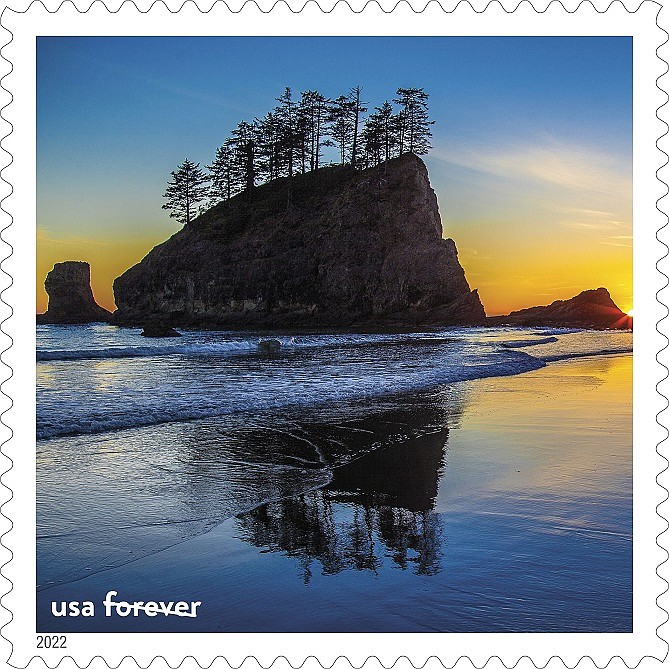 This month, in celebration of the 50th anniversary of the National Marine Sanctuary System, the U.S. Postal Service released a new series of stamps depicting the abundant wildlife and diverse ecosystems that can be found in the waters of America’s national marine sanctuaries and marine national monuments. 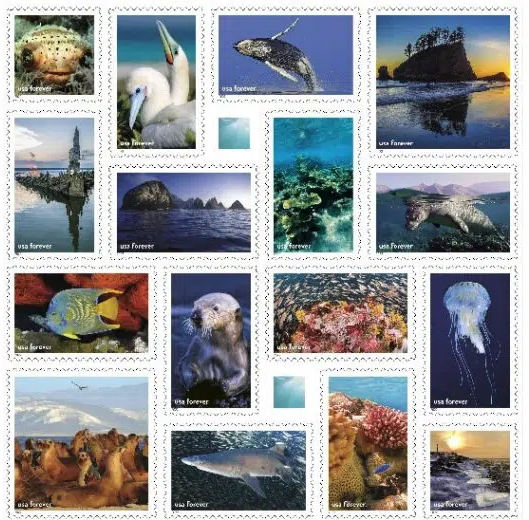 “The new Forever stamps celebrate the majestic seascapes, wildlife, and underwater wonders that our National Marine Sanctuary System offer,” said Kris Sarri, president and CEO o the National Marine Sanctuary Foundation. “For half a century, our sanctuaries have protected these treasures for all of us to enjoy, explore, and discover. As we mark the 50thanniversary of the Sanctuary System, we must recommit to saving these spectacular places and protecting their splendor for generations to come.”

The scenic Olympic Coast National Marine Sanctuary is featured as one of the stamps. Here is the story behind the Olympic Coast stamp, supplied by the photographer, Matt McIntosh:

“Our video production team was completely exhausted after an extremely long day of filming up-and-down Olympic Coast, which is the rainiest place in the continental United States. However, just as I entered the campground RV, which we had rented for a couple days in order to charge batteries as we slept, the sun rays miraculously broke through the evening clouds. It was less than 60 minutes before the golden hour and we were only 7 miles away from the most scenic beach I had ever seen in my life. Two of us agreed to go, but the third and last team member refused our pleas as he was ready to finally relax. There was no time to discuss the matter so I grabbed some gear and hurried to our car for the short drive to the beach trailhead. As the car began rolling down the campsite dirt road, the third crew member jumped into the backseat with his gear and a smirk on his face, clearly unwilling to let us capture the potentially amazing seascape without him. There were even less clouds when we arrived at the trailhead. We couldn’t believe the luck! We found ourselves in a frenzy, securing our backpacks and gear for the short 3/4 mile hike on a gorgeous trail under a thick tree canopy and lush ferns, which we practically ignored in order to attain our goal. Sure enough! We exited the forest and were presented with the most gorgeous seascape sunset combo imaginable. It literally stopped me in my tracks and I had to take it in for a few short moments without the camera before I got to work.”

The Olympic Coast National Marine Sanctuary was established in 1994 and includes 3,188 square miles of marine waters off the rugged Olympic Peninsula in northwest Washington state. From the Olympic Coast Marine Sanctuary website: It is rich with marine life, diverse habitats, history, and Native American culture. For Native American tribes on the Olympic Coast – the Makah, Quileute, Hoh and Quinault – use o the waters stretches back centuries. Twenty-nine species of marine mammals reside in or migrate through Olympic Coast National Marine Sanctuary including humpback and gray whales, seals, sea lions and sea otters. The sanctuary provides critical nesting habitats for seabirds of all kinds and an important migratory pathway. It is also among the most productive fish-growing habitats in the world with salmon, halibut, rockfish, hake, herring and sunfish. Visitors enjoy recreation in true coastal wilderness.

Thinking of visiting? The Olympic Coast Discovery Center on the Port Angeles waterfront is a great place to start. For more information, visit https://olympiccoast.noaa.gov/visitor/discoverycenter/discoverycenter.html

As these stamps show up in mailboxes across America, may they inspire more people to celebrate, discover, explore and enjoy the unique wonders of the National Marine Sanctuary System. For more information, visit 50th anniversary.