The Seven Wonders of Washington State

A view of the Palouse Hills from Steptoe Butte, photo by Howard Frisk 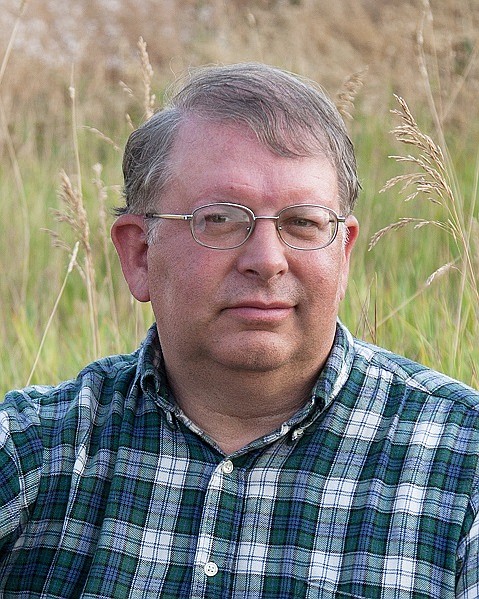 As a Washington State native, Howard Frisk grew up exploring the mountains, grasslands and seashores of the Great Pacific Northwest at every opportunity. Now his favorite activity is taking photo road trips around the Evergreen State, always trying to capture the beauty that awaits those who seek it.

Washington State is an amazing place and what makes it so amazing is its natural wonders.

Washington may have the most varied landscape, climate and ecology in the United States, with mountains, deserts, rain forests, deep gorges, rich farmland and desolate scablands – all within a few hundred miles of each other.

Inspired by the idea of the ancient Seven Wonders of the World, I decided to make my own list of the Seven Wonders of Washington State. I chose these locations because there is something very special about each one, they are easily accessible, and they provide opportunities to have personal experiences with the most fascinating places nature has to offer.

Most of these wonders are one-of-a-kind geological formations that are found nowhere else in the world. Washington State is among the most ecologically diverse states in the country, and each of the seven wonders represents a different aspect of that ecological diversity. These seven wonders are all located within a few hours driving distance from Seattle and most are accessible year-round. Where else on Earth can you travel from a rain forest to a desert in less than 100 miles? 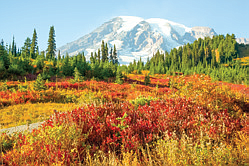 People come from all over the world to marvel at Mount Rainier – including its rain forests, wildflowers and 26 major glaciers. Photo by Howard Frisk

First and foremost is Mount Rainier, one of the most amazing places on earth. Some of the original inhabitants of the area called Rainier Tahoma, which can be roughly translated as “God’s home.” With 26 major glaciers, Mount Rainier is the most glaciated mountain in the contiguous US. At 14,411 feet, it rises high above its surroundings to become one of the most massive mountains on earth. Within the Mount Rainier National Park boundaries, you can find temperate rain forests, alpine meadows, rocky tundra, forested valleys, glaciers, hot springs, rivers, lakes, wildflowers in the summer and blazing fall foliage in the autumn. There are several picturesque lakes near Mount Rainier. The most accessible are Reflection Lakes, located on the southeast side of the mountain along Stevens Canyon Road. You can park on the side of the road and see a perfect reflection of Mount Rainier without even getting out of your car! The wildflower season on Mount Rainier is short but spectacular, with July and August normally being the best time to see them.

Mount St. Helens is the only volcano in the contiguous 48 states to erupt in modern times. Photo by Howard Frisk

Second is Mount St. Helens, which has the distinction of being the only volcano in the contiguous 48 states to erupt in modern times. When the north side of the mountain collapsed, it created the largest landslide in recorded history. The mudflow was 600 feet deep in places and the ash plume fell on cars as far away as South Dakota. The eruption on May 18, 1980 destroyed 185 miles of roads, 47 bridges, 250 homes, wiped out hundreds of square miles of forest and killed 57 people. But the story of Mount St. Helens is not just about death and destruction; it is also about recovery. Naturalists are surprised at how quickly nature has started to reclaim the devastated landscape. Today visitors have the opportunity to explore the blast zone around Mount St. Helens first-hand through a network of trails, guided walks and presentations by volunteers.

The Columbia River Gorge is 4,000 feet deep in places. It offers spectacular views and a climate that undergoes a dramatic transformation east to west. Photo by Howard Frisk

Next we have the Columbia River Gorge. It is really amazing to see a river flowing right through the mountains. This roughly 90-mile-long canyon cuts east to west through the Cascade Mountain Range, forming the border between Washington and Oregon. In some places the gorge is 4,000 feet deep. Unlike the other six wonders of Washington State, the best place to see this one is not in Washington State, but in Oregon, from the Vista House. Vista House was built atop a bluff 700 feet above the Columbia River in 1918 as a rest stop for travelers on the original Columbia River Highway. The climate and vegetation along the Columbia River go through a dramatic transformation from west to east. In the west, near the Bridge of the Gods, is a temperate rainforest that can get over 110 inches of rain annually. As you travel east, the climate gets drier and drier until it becomes semi-desert near Arlington, which can receive less than 10 inches of rain per year.

The Palouse Hills are not only a landscape unique in the world, they are photographer Howard Frisk’s favorite of the ‘Seven Wonders’

Fourth is The Palouse, a region in southeastern Washington. The Palouse is the most serene and pastoral of Washington’s seven wonders, characterized by gentle rolling hills covered with wheat fields. Seen from the summit of 3,612 foot high Steptoe Butte, these hills look like giant sand dunes and were formed in much the same way. In the spring they are lush shades of green when the wheat and barley are young; in the summer they are dry shades of brown when the crops are ready for harvest. The same climate that is ideal for wheat is also great for growing grapes. A relatively recent development in the southern Palouse is the appearance of vineyards, which have the same latitude as the Bordeaux wine growing region of France. The Palouse hills are not only a landscape unique in the world, they are beautiful to behold, making them my favorite of the Seven Wonders of Washington State.

The geologic story the Channeled Scablands tell is mind-boggling, including mega-floods and an ancient waterfall that was the largest in the world. Photo by Howard Frisk

Our fifth and probably least known are the Channeled Scablands. The story of how the Channeled Scablands were formed is mind-boggling, and all the geological evidence is there for you to see for yourself, if you know where to look. During the last ice age 10,000 to 20,000 years ago, part of a glacier blocked a river in northern Idaho. This created an ice dam that caused the river to form a 3,000-square-mile lake in western Montana containing as much water as Lake Erie and Lake Ontario combined. The ice dam collapsed and created one of the largest mega floods in the history of the world – a flood as great as the combined flow of all the rivers in the whole world, times ten. The most dramatic evidence is Dry Falls: a cliff three and a half miles wide and 400 feet high. During the Missoula Floods, it was the largest waterfall in the world. Geologists believe that the mega floods happened more than 40 times and only stopped when the ice age ended. Each mega flood compounded the erosion of the previous one and culminated in the bizarre landforms we now call the Channeled Scablands.

The Hoh Rainforest gets as much as 14 feet of rain a year and has been awarded the distinction of being a World Heritage Site and a Biosphere Reserve. Photo by Howard Frisk

Number six: The Hoh Rain Forest. It gets as much as 14 feet of rain a year. The western slopes of the Olympic Mountains are the first area to get hit with the moisture-laden wind and rain storms that come in from the Pacific Ocean. As the air rises along the windward slopes of the mountains it cools and yields precipitation, and lots of it. The Hoh Rain Forest has been awarded the distinction of being a World Heritage Site and a Biosphere Reserve by UNESCO. Its unique ecosystem has remained unchanged for thousands of years and is now the most carefully preserved rainforest in the northern hemisphere. Most of the Seven Wonders are best visited on warm sunny days. Not this one. The best time is in the spring when it is damp and raining because that is when the moss is the most lush and green.

The Long Beach Peninsula stretches 28 miles along the southwest coast and is an official State Highway. Photo by Howard Frisk

The last item on our list is Long Beach, aka “The World's Longest Beach,” which stretches 28 miles along Washington's southwest coast. It starts close to where the Columbia River meets the Pacific Ocean and extends north to the entrance to Gray's Harbor. To get an eagle's eye view of Long Beach, go to Bell's View in Cape Disappointment State Park. It is a viewing platform constructed at the end of a quarter mile long paved trail along the top of North Head. Technically, Long Beach is not the world’s longest beach, but it is the world’s longest continuous beach on a peninsula. Many people are attracted to Long Beach because they can drive on it and Long Beach is an official Washington State Highway, one with a 25 mph speed limit. (Beach driving tip: drive where the sand is wet or damp to avoid getting stuck. Getting towed is expensive and embarrassing, especially if any of the locals are watching!)

It is my hope that you will feel inspired to visit each of Washington State's natural wonders and see them for yourself.