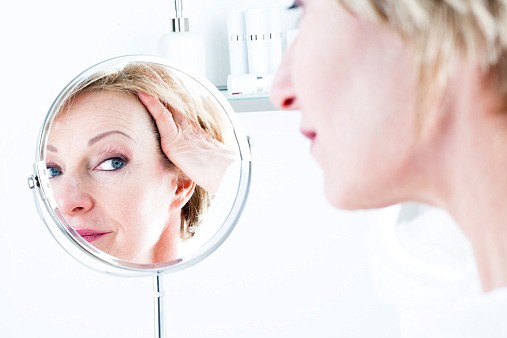 According to a study conducted at the Yale University School of Medicine, women with deep forehead wrinkles have a greater likelihood of having weak bones. Fashion had just started to use older women with wrinkles in some of their magazine ads and now it's a sign of disease. Great.

Osteoporosis in women is no laughing matter. It can lead to years of painful bone fractures. The Yale study, headed by Lubna Pal, MD, focused on looking at the wrinkles of women while they were in early menopause, within three years of the end of their menstruation cycle. The study measured the number and the depth of facial wrinkles and then it measured the bone density of the women. Lower bone density was seen in women with more wrinkles, especially above the eyebrows.

Wrinkles and weak bones share a common bond in a protein called type 1 collagen. This protein is essential for strong bones and for healthy, smooth skin. As women enter menopause, the levels of this protein drop leading to lower bone density and also wrinkles.

Osteoporosis in women is largely preventable as long as supplementation is used early and often in women with weak bones. However, knowing exactly who does and does not suffer from low-bone density has always been something of a mystery. Pal's study suggests that doctors and patients alike can use the wrinkle test as a broad indicator for bone health. The study found that the wrinkles that rise up vertically above the nose were the best indicators for low bone density and weak bones. These are called the glabellar lines.

The Yale study is not without it's problems. It has not yet been published and it flies in the face of several known factors that increase bone density like the presence of Vitamin D. Vitamin D levels increase depending on exposure to the sun. However, sun exposure is known to increase wrinkles and prematurely age skin. In addition, critics of the study point out that that the study would have been more effectual had it measured wrinkles in other areas of the body that are less likely to see sun exposure.