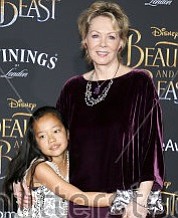 Jean & daughter. Jean and her husband of 30 years, actor Richard Gilliland, have two children – a 27-year-old son and 9-year-old daughter ("I was hoping they would be a little closer in age, but the adoption process took so long," says Jean of adopting her daughter from China).
Photo by Tinseltown

Jean Smart: From Seattle to Hollywood and Back Again

Jean first discovered her love of theater at Ballard High School, and was later accepted into the BFA theater program at the University of Washington