It's in the pipeline 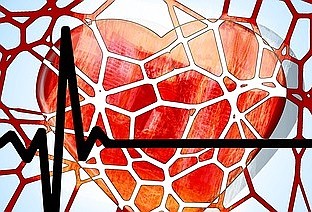 Atherosclerosis, a buildup of plaque, can lead to heart disease, artery disease, and chronic kidney disease.

Atherosclerosis is traditionally treated by inserting and inflating a balloon to expand the artery. Other treatments based on lasers can remove blockages rather than simply compressing them but are used infrequently because they have a high risk of complication and low efficacy.

Rohit Singh of the University of Kansas and other researchers developed a method that combines a low-power laser with ultrasound to remove arterial plaque safely and efficiently.

High-power laser treatments direct thermal energy to vaporize water in the artery and create a vapor bubble, which expands and collapses to break the plaque. Similarly, the technology, pioneered by Xinmai Yang, doctoral advisor for the team, uses a low-power nanosecond pulsed laser to produce microbubbles. The addition of irradiation from ultrasound causes the microbubbles to expand, collapse, and disrupt the plaque.

"In conventional laser angioplasty, a high laser power is required [for longer periods], whereas in our technology, a lower laser power is only required for initiating the process," said Singh. "Overall, the combination of ultrasound and laser reduces the need for laser power and improves the efficiency of atherosclerotic plaque removal."

Because it destroys rather than compresses the plaque, the combination technique will lessen the re-narrowing of the artery, compared to balloon angioplasty or stenting. The control provided by the ultrasound and the low-power laser will lower the risk of dissection and perforation in arteries.

Both the laser and ultrasound techniques are commonly used by clinicians and should be easy to teach and implement following the in vivo studies.

Combining low-power lasers and ultrasound techniques is not limited to atherosclerosis treatments. Singh and collaborators are also using the method for photo-mediated ultrasound therapy and ultrasound-assisted endovascular laser thrombolysis. The former can be used to remove abnormal microvessels in the eye to prevent blindness, while the latter can dissolve blood clots in veins.