The past comes alive at Bandelier 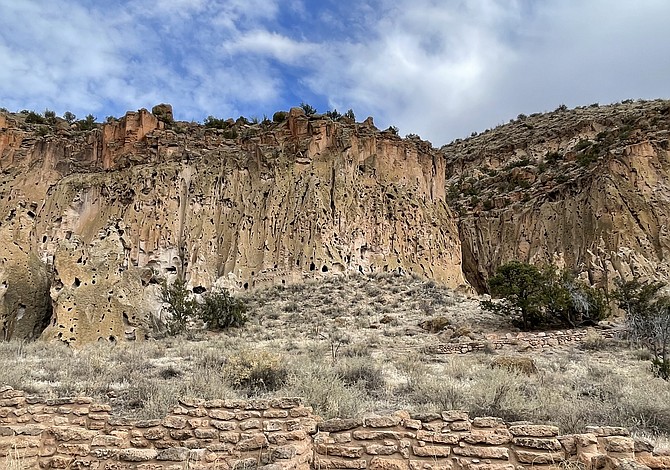 The Southwest is a mecca of ancient Native American settlements, including such notables as Mesa Verde, Chaco Canyon, Canyon de Chelly and Bandelier National Monument. The latter is an easy day trip for visitors staying in Santa Fe, and is also in close proximity to other northern New Mexico popular destinations, like the scientific research town of Los Alamos, the Valles Caldera National Preserve and the picturesque Jemez Mountains.

Bandelier boasts over 33,000 acres of dramatic landscape, containing steep narrow canyons, rugged peaks and plenty of unspoiled backcountry. There are cavates or cliff dwellings and other stone structures to explore, as well as petroglyphs and pictographs, providing evidence of people having lived there for more than 11,000 years. And with seventy miles of trails, hikers will be in heaven.

President Woodrow Wilson signed the legislation to create the monument in 1916. It is named after anthropologist and archaeologist Adolph F.A. Bandelier, who was one of the first to study indigenous cultures of the Southwest.

Bandelier’s human history follows nomadic hunter-gatherers in their pursuit of wildlife, as they migrated within this region. The Ancestral Pueblo people took up permanent residence in the area around 1150 CE and remained until 1550 CE. They built homes along the base of the canyon wall, using malleable volcanic tuff, and carved out rooms within the cliffs. 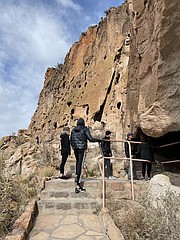 The people relied on agriculture for their livelihood. Primary crops planted included corn, beans and squash, or what are commonly known as the “three sisters.” These basic foods, with the addition of native plants and meat from deer, rabbit, squirrels and turkeys (the latter which were raised), helped to fulfill nutritional needs.

Mesa tops were utilized as farm fields and techniques such as terracing and grid gardens helped to preserve water. The volcanic tuff was also of importance, as it contained pumice, which has a spongelike quality to absorb water.

Eventually, the challenges of the land, along with a severe drought, forced the people to move from the canyon to pueblos along the Rio Grande.

When exploring Bandelier, visitors typically start at the museum inside the visitor center, which features exhibits about the area’s inhabitants. On display are pieces of Ancestral Pueblo pottery, tools and other artifacts, and dioramas illustrating Pueblo life in the past and today.

After your introduction to the area, take the Main (Pueblo) Loop Trail to discover the various archeological sites within Frijoles Canyon. There’s a trail guide to help you identify twenty-one points of interest along the way.

Big Kiva, for example, once had a roof and served as a communal gathering place. Tyuonyi was a two-storied structure with over four hundred rooms, many used for storage. Talus House is a partly restored dwelling with outward projecting vigas or roof posts. It was reconstructed in 1920 and is similar to other houses made of talus. And at Long House, along the base of the cliff, there are numerous petroglyphs and pictographs of a variety of subjects such as animals, human figures, directional signs and more.