The Man Who Saw Bigfoot

How the legendary creature ruined this Washingtonian’s life, then gave him a fresh start 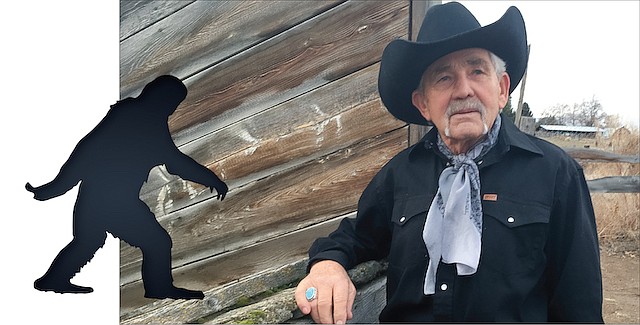 In 1967, Bob Gimlin of Yakima accompanied his friend Roger Patterson on a mission to track Bigfoot. The result is the world-famous footage of a hairy creature seen looking over its shoulder. It was looking at the no-nonsense cowboy, Bob. Photo courtesy KNKX.org

If you close your eyes and picture Sasquatch, there’s a good chance you’ll conjure up a very specific image: a big, hairy humanoid, mid-stride, arms swinging, head turned to glance back over its right shoulder.

In that iconic picture, the thing Bigfoot was turning back to look at was Bob Gimlin.

Gimlin, along with Roger Patterson, gathered their famous film footage in northern California in 1967. More than fifty years later people still pore over it, debating its authenticity and speculating on how it may have been faked.

Bob Gimlin lives in Yakima, and he’s a real-deal cowboy. He used to break horses, he rode in an honest-to- God sheriff’s posse, and, of course, he rode in rodeos, which is where he met Roger Patterson.

One day in 1961 they ran into each other at a gas station, and Roger told Bob he wanted to show him something. He came back with a large plaster cast of a footprint – “this is a Bigfoot track,” Roger said.

Bob wasn’t sure what to make of that. But he was open-minded enough that one day later, when Roger came knocking, he was willing to listen.

“He come running into my place and he said Bob, can you take me to Northern California?” remembers Bob. “Labor Day weekend they found all these tracks down there.” 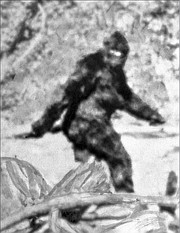 The Bigfoot, also known as Sasquatch seen in this still shot from the world-famous film, is a subject of controversy and enduring intrigue

An Encounter At Willow Creek

Bob agreed to load up three horses in his trailer and head down to the area around Willow Creek, in Northern California. They quickly discovered the tracks they were looking for had succumbed to rain and human foot traffic. But the two men mounted up and headed deep into the woods on old logging roads.

“The leaves were all changing, reds and yellows,” Bob recalled. “We were just riding up there, Roger was taking pictures of me on the horse and leading the packhorse. That’s when Roger’s horse just started jumpin’ and a lungin’.”

Then, Bob saw what was spooking the horse.

“There was a Bigfoot standing there just on the other side of the crick from us. But it just immediately turned and started walking away. Well, Roger by then had got his camera out of his saddlebag on his horse, and he was up running across the crick there. He hit the other side of the bank and stumbled and kind of fell down on his elbows. And that’s when it made that famous head turn, is when I stepped down off the horse,” he said.

There was no doubt in Bob’s mind: This wasn’t a hoax. This was Bigfoot.

Once they’d calmed their horses down, they tried to follow her—she appeared to be a rather heavy-bosomed female—but to no avail.

A Schism, And An Imposter

Once the shaky film was developed, Roger was giddy, certain that he had a goldmine on his hands. But Bob was unimpressed.

“When I first saw the film I thought [expletive], that ain’t nothing. I said I saw a lot more than that. So I was kind of the bad guy,” said Bob.