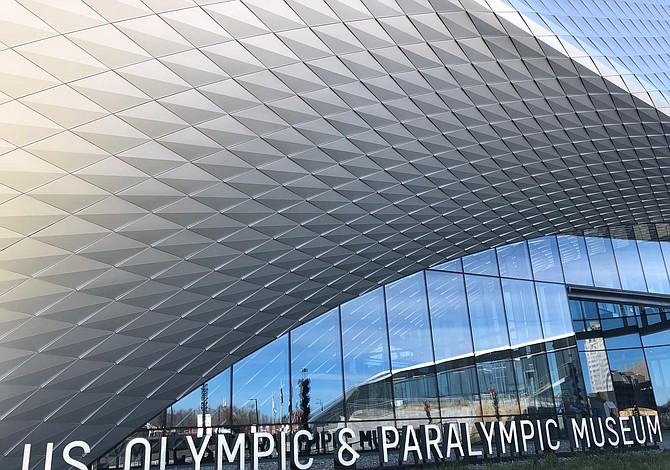 The museum also uses the technology to monitor where visitors are and prevent overcrowding. Floor signage and physical dividers help promote social distancing, and face coverings are currently required upon entry. Additionally, you’ll get a complimentary stylus to navigate the exhibits and cut down on any touching.

After registration, admire “Olympus Within,” a massive bronze sculpture, created by Olympic fencer and sculptor, Peter Schifrin. Then take time to explore the Hall of Fame, the first of the museum’s twelve galleries. Members of the Hall of Fame include 119 individual Olympians and Paralympians, eleven teams, five coaches and nineteen special contributors. You can browse through the bios of such notables as Mary Lou Retton, Kristi Yamaguchi, Eric Heiden, Oscar De La Hoya, the 1996 U.S. Women’s Soccer Team, Dick Ebersol, Flo Joyner, Michael Johnson, and many more.

After learning about some of your favorite athletes, proceed to the third floor of the museum and begin working your way down through the rest of the galleries, which include: Introduction to the Games; Athlete Training; The Lab; Parade of Nations; Summer Games & Winter Games; The World Watches; Medal Collection; Theater; Medal Ceremony; and the Rotating Gallery.

Introduction to the Games provides a detailed history of the ancient Games and the origins of the modern Olympic and Paralympics. The first Olympic event was actually a 192-meter race held in 776 B.C., which was won by a cook named Koroibus. Back then, the events pitted ordinary athletes against kings and emperors.

The highlight in this gallery is the collection of Olympic torches, dating back to 1936 when the first Olympic torch relay occurred. There are also videos of torches being used to light the cauldrons at the opening ceremonies. The one of Muhammad Ali performing the task at the 1996 Games in Atlanta, while suffering tremors from Parkinson’s Disease, is especially moving.

Another interesting exhibit is the interactive map, which displays the hometowns of all 12,174 Team USA athletes, who have competed in the Olympic and Paralympic Games. The motivation behind the map is to provide a valued point of personal connection for visitors. Maybe there’s an Olympian that grew up in your city, in your neighborhood.

Athlete Training, one of the most popular galleries, offers visitors the chance to try six interactive sport demonstrations, including the 30-meter dash, alpine skiing, archery, goalball, skeleton and sled hockey. Bring your A game, as you test your speed, accuracy, focus and reaction time. Each of the activities is challenging, but I never had a chance when it came to the dash. My opponent, an animated image of Jessie Owens, finished the race before I barely got to complete one step!

Science and technology take center stage in The Lab, where you’ll learn how athletes maximize their performance in training and competition. The technological advancements in equipment, including prosthetic limbs, as well as rehab and recovery methods are remarkable. There’s also a display covering the use of performance-enhancing drugs, including a video of cyclist Tyler Hamilton talking about his personal usage, while confessing his wrongdoing.