Hats off to history and innovation at the Royal Gorge Bridge 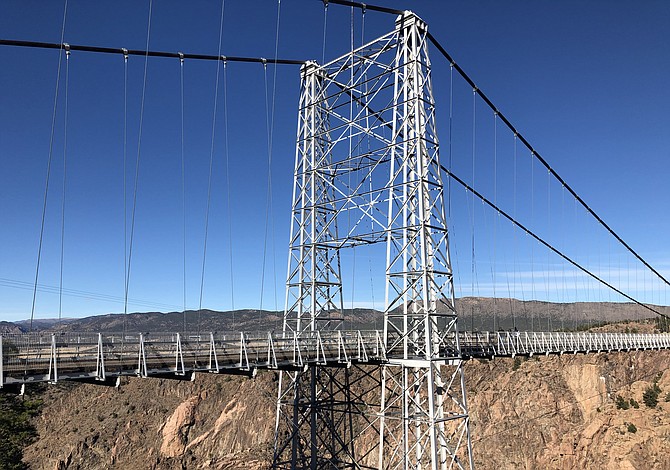 Everyone should have the opportunity to walk across the country’s highest bridge, if only to comprehend this amazing engineering feat. And of course, to take in the jaw-dropping views it provides from all angles.

The Royal Gorge Bridge, located an hour south of Colorado Springs in Cañon City, Colorado, is truly a marvel. At an impressive 956 feet high and 1,260 feet long, it is a testament to ingenuity. Built in 1929, this suspension bridge is also a historical sentinel, which has witnessed many of our nation’s important historical events, including the Great Depression, WWI and WWII and more.

The Royal Gorge has always held significance as a popular travel route for creatures and humans alike. Millions of years ago, the dinosaurs roamed in this area, with star-studded appearances by such notable behemoths as the brontosaurus, stegosaurus and allosaurus. Numerous fossil discoveries serve as record of their presence.

Native Americans followed, using the protected canyons to camp in, while hunting for buffalo. Then the Europeans arrived to explore the gorge’s wild Arkansas River’s edge. Later, the railroads got in on the action, resulting in what came to be called, the Royal Gorge Railroad War of 1877.

The battle was over the rights to silver deposits along the Arkansas River with the Denver and Rio Grande Railroad on one side and the Santa Fe Railroad on the other. Both parties were equally as determined in their attempts to win. They dynamited each other’s construction sites, exchanged bullets and hired gangs to do their dirty work. After a six-month court fight, the Denver and Rio Grande Railroad was declared the victor. The company proceeded to construct lines along the base of the gorge.

The rail line allowed more people to see the gorge and admire its beauty. The mining boom town of Cañon City, which had been given the land around the gorge by the federal government for use as a park, wanted to attract more visitors to the area. This spurred interest in the idea to build a bridge across the gorge.

In 1928, Lon Piper, a Texan with bridge construction experience, who also had the ability to get financial support for such a project, stepped forward. After much debate and planning, the city approved the plans and design and work commenced on the new tourist attraction.

The bridge was completed in a mere seven months by a crew of eighty. What’s also remarkable is that there were no serious injuries or deaths during the project, even though it involved work that took place while dangling at dizzying heights above the river.

The bridge cost $350,000, however, it came in about $100,000 over budget, which today would be the equivalent of about twenty million dollars. Admission to cross the structure was initially seventy-five cents. The crowds came in droves, and since opening, this famed attraction has attracted upwards of thirty million visitors.

The Royal Gorge Bridge boasts two 150-foot-high towers with two large cables weighing 200 tons each. The cables are actually made of 2,100 individual cables that have been bundled together. The bridge is eighteen feet wide and can hold two million pounds of weight. Over 1,200 fir planks were bolted to its deck.

Take your time as you stroll across this manmade wonder and stop to read the placards that provide several historical bits of information. There are also signs and flags along the way, marking each of the fifty states (the flags are only up from Memorial Day to October).

Photo opps are plentiful of the bridge, the dramatic mountain vistas, the carved walls of the steep gorge and the Arkansas River below. Look through the small cracks between the planks for an eerie view into the shadowy abyss.

Once you’re on the other side, make sure to go to the Plaza Theater for a short film on the history of the bridge and gorge. There are also original artifacts and photos in cases lining the walls of the room. Among them are pictures of the damage to the Royal Gorge Park from the terrible 2013 wildfire.

The fire started west of the bridge and jumped the walls of the gorge. It destroyed forty-eight of the fifty-two structures in the park. The bridge, however, remained stalwart – only about a hundred of its boards were scorched and needed to be replaced.

The park was rebuilt and nearly two years later, it officially reopened with a grand ceremony attended by community members and dignitaries.

Park admission includes an Aerial Gondola ride, which offers another vantage point of the bridge and its surrounding scenery. For an additional cost, you can amp up the adrenaline and soar above the river on the gravity-defying Cloudscraper Zipline, the highest zipline in the country. Or extend over the edge of the gorge on the Royal Rush Skycoaster, which can reach speeds of up to fifty miles per hour.

Those interested in a different type of challenge might want to try the Royal Gorge Via Ferrata. This is a guided mountaineering experience, where you’ll hike and scale the granite walls via a system of steel cables that are fixed to the rock.

Kids will find an attraction of their own at the Tommy Knocker Playland. It’s a haven of activity with ropes, slides, nets, tunnels, a vintage carousel and more.