Journey through the depths of Mordor 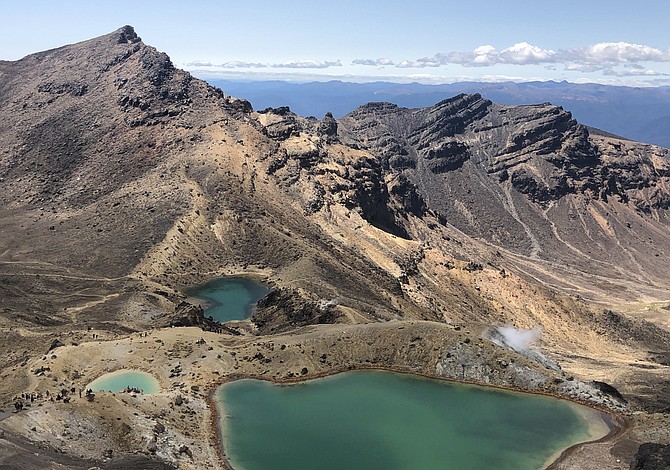 “It’s the last push,” shouts our guide Connor, with annoyingly, over-the-top enthusiasm. I don’t believe him. And neither does anyone else in our group of six hikers. We’ve all learned by now that Connor’s using what I refer to as “guide speak” – the rah-rah efforts that guides employ to motivate their groups to keep moving when the going gets tough. Basically, if you think it’s the final push, you’ll muster up the energy to make it to the finish line, convinced that it’s just around the bend or over that hill. You want to trust the guide, you really do. But, you know better. You realize that it’s the last push before the last push…You get the idea.

Superlatives are inadequate to describe New Zealand’s Tongariro Alpine Crossing, an unforgettable 12.1-mile trek that is often regarded as one of the top ten one-day hikes in the world by the likes of National Geographic. I was leery of doing this walk because everything I’d read described it as strenuous and very challenging. Though I enjoy hiking, such description gave me pause. I knew the hike would push my fitness envelope, but on the other hand, I also knew the rewards would be great. I had practically drooled over the pictures I had seen of the incredible scenery. And the bragging rights would certainly be an added bonus!

The Crossing, as it is often called, is located within Tongariro National Park. Established in 1895, the park was a first for New Zealand. It’s a dual World Heritage Area, recognized for both its Maori culture and outstanding volcanic features. To the Maori, these volcanoes represent a principal part of their history and are entwined into their ancestry and legends. They are considered such precious treasures that the local Tuwharetoa Maori gave the vast area to New Zealand, making Tongariro the first park in the world created by gift from an indigenous people.

One night, the mountains decided to vie for the right to win Pihanga. They fought violently with eruptions, smoke, fire and hot rocks, causing the land to quake under their force. When their dispute ended, Tongariro emerged victorious, winning Pihanga’s devotion and the right to stand by her forever.

The defeated mountains were given one night to move away from the couple and by the next morning, they would be eternally located at the site of their choice. Two of them, Ngauruhoe and Ruapehu, opted for positions to the south of Tongariro, while the others headed in alternative directions.

Tongariro, together with Ngauruhoe and Ruapehu, are the three main volcanoes in the park. They are part of the long line of volcanic and earthquake activity that extends around the Pacific Ocean as the Ring of Fire. Ruapehu and Ngauruhoe are two of the most active volcanoes in the world. Ruapehu last erupted in 1995 and again in 1996, sending clouds of steam upwards and blanketing the mountain in ash. Ngauruhoe took center stage turn back in 1977, ejecting red hot lava blocks and ash.

The most recent activity on Mt. Tongariro was in 2012, but the eruption only lasted a few minutes, and occurred partly from existing vents at one of the craters.

I opted to do the Crossing with Adrift Tongariro because I wanted the accompaniment of a guide in order to get the most out of the experience. With a guide, I’d be able to learn more about the geology and lore of the landscape. My husband was all for being part of a group, as he knows I don’t complain if there are other people hiking with me!

Adrift Tongariro is a highly reputable outdoor adventure company that specializes in guided outdoor adventures through the Whanganui and Tongariro National Parks. Guides are very experienced, having led a combined total of over 10,000 hikes, and they possess an extensive knowledge of the region. They are passionate about their surroundings and enjoy sharing it with others.

The trail, or as the Kiwis say, “tramping track,” starts in scenery akin to a Scottish moorland and finishes through woodland. Most of the time, however, you are trekking through raw volcanic terrain that is either sharp-edged new volcanic rock or loose and shifting scree. Active fumaroles abound, emitting steam and Sulphur dioxide gas into the air, which is distinguished by a pervasive rotten egg odor. The lakes and pools you see are colored by the volcanic minerals dissolved in them. In some places, there are large springs bubbling with near-boiling water.

As I look around, I feel as if I’ve been beamed up to another planet. Red and black volcanic rocks, barren lava flows, steam vents and craters full of emerald green water combine to create an otherworldly atmosphere. This thermal wonderland is a study in contrasts and its eerie beauty leaves an indelible impression on me.

I clearly understand why director Peter Jackson chose to shoot a number of scenes for “The Lord of the Rings” movies here. This is the heart of “Mordor” and forbidding “Mount Doom” (Mt. Ngauruhoe) is omnipresent.

The trail is linear, beginning on the west side of Mt. Tongariro and finishing on its north flank. It’s deceptive at first, as you’re strolling through a valley, adorned by heather and manuka, with some mountain vistas in the distance. I’m feeling confident, but I know this is the easy part.

Then things start to get a bit tough with the notorious Devil’s Staircase. It’s akin to being on a never-ending stair climber and I confess that the idea of turning back crossed my mind several times. But, I’m not a quitter, and once I reached the top of the staircase, I realized that my effort had a big payoff. The views of Tongariro were epic.

From the saddle, the trail crosses the vast South Crater and then you’re in for another difficult uphill stretch to the highest point of the hike - the Red Crater. This is one of several active craters on top of Mt. Tongariro. Formed some 3,000 years ago, it shows evidence of spectacular lava flows. The dramatic, vivid red hues and size of this ginormous depression will leave you breathless, if the climb hasn’t already!

From atop the crater, you’ll also get the best panorama of the iridescent Emerald Lakes, which appear as glowing beacons. These three multicolored lakes are a definite highlight of the trail and the photo ops from this spot are ideal.

Descending the Red Crater requires extra care, as you’re basically walking on a steep slope of volcanic sand and small rocks. It’s hard to get good footing at first, but Connor’s technique of digging your heels in and then sliding down proves to be very effective. At the bottom, you’ll get a close-up look at the Emerald Lakes before making your way through the Central Crater.

Blue Lake is next and then you’re in the final stretch, but it’s a very long stretch down the northern side of the volcano, so don’t get too excited. Those last few miles felt like an eternity to me. I zig-zagged down winding paths and countless stairs, while noting the landscape changes along the way.

Though the forest provided relief from the unrelenting sun on this hot day, it also prohibited me from seeing how far I was from the end of the trail. I was like a kid, who nags at her parents, asking, “Are we there, yet?” every five minutes. At one point, I thought I was almost done – my knees surely were – but then a sign indicated there was one more agonizing mile to go. “Final push” yelled Connor, but this time he actually meant it!