How I Discovered Hugs 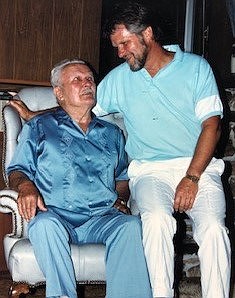 How I discovered Hugs!

In my growing up years, my father was an enigma to me. To my mother and my sisters, he was amazingly affectionate. Hugs and kisses were passed out freely. To me, more than anything else, I was given the heavy hand of discipline. He saw to it that I knew right from wrong, that I knew the difference between the truth and lies, and that kindness was preferred in dealing with almost every situation. Because of these things, I knew he cared for me, but there was definitely something missing. He was never affectionate with me. He never touched me except for an occasional over his knees swat or two. Those seemed always well deserved and I didn’t resent any of it.

We went hunting and fishing together but still the distance prevailed. Things changed after my first year away at college. My roommate was an exchange student from Norway. His name was difficult to pronounce so my fraternity brothers named him Snowball. For unexplainable reasons, we hit it off and he became my closest friend. He was a super athlete, a ski jumper and had a trophy from the King of Norway to prove his prowess.

I’ll move ahead to his leaving to explain the change in my relationship with my father. At year’s end we said our sad goodbyes and Snowball hugged me. I was confused at first because that was the first time I’d been that close to a man. I decided I really liked the hug and that it had been the perfect way for us to part.

I dwelt upon that hug and decided to try it on my dad. When the school year ended, I hugged my sisters and my mom. I grabbed my father and gave him my best hug. He stiffened and all but pushed me away. I learned that my father had never been close to his father and that his mother had considered physical closeness a sin. Small wonder he was unable to pass any kind of physical affection to me.

I persisted and eventually my father discovered he liked the closeness our hugs produced. In his late years he made sure there was always time for hugs.

Fathers hug your children, hug your wife, hug your friends. Give them a genuine full frontal, cheek to cheek, heavy wrap around hug. If you don’t know it now you will discover that hugs are some of the nicest, most satisfying gifts you can give or receive.

Be a father. Be a loving father. Happy Father’s Day. Jerry Thorsen

Gerald Thorsen, born and raised in Washington, graduate of WSU in radio and television production pursued a career in Opera for 35 years.