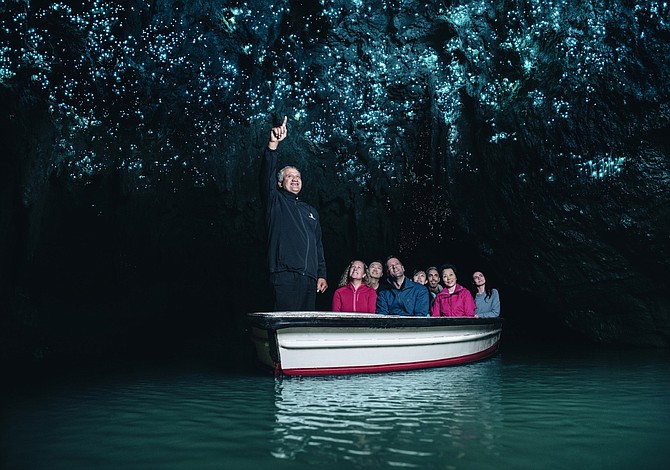 The North Island of New Zealand has an abundance of natural treasures. Among them is the world-renowned Waitomo Glowworm Caves. The name “Waitomo” comes from the Māoris words wai and tomo, meaning hole or shaft.

The local people had known about the caves for a century or so before two English surveyors were shown the entrance back in the 1880s. The pair, together with Māori Chief Tane, conducted explorations of the area by candlelight and via a raft they took into the cave where the stream goes underground. During their journey, they came across the Glowworm Grotto and were awestruck by the twinkling lights coming from the ceiling.

As they traveled further into the cave, the men were also amazed by the limestone formations, which surrounded them in all shapes and sizes. This limestone is composed of fossilized corals, seashells, fish skeletons and many small marine organisms, which have been layered upon each other and compressed. The caves began to form when volcanic activity caused the limestone to buckle under the ocean and rise above the sea floor. As the rock was exposed to air, it separated, creating cracks that allowed for water to flow through them. The limestone eventually dissolved, leading to the development of a multitude of caves.

Today, there are around 300 limestone caves in the Waitomo region. These formations stand as one of the country’s most inspiring natural wonders and are a must-see destination for visitors to New Zealand.

On a tour of the caves, you’ll see stalactites and stalagmites and a host of other cave decorations, which have taken millions of years to form. To provide some perspective, the average stalactite grows one cubic centimeter every one hundred years. You’ll also note that the walls of the cave are covered with fungi, in particular a variety called the cave flower that is actually a mushroom-like fungus.

The star of the caves, however, are the glowworms. Unique to New Zealand, these insects are closely guarded by a Scientific Advisory Group, who monitors the air quality of the caves to establish how they should be managed. They determine when air flow patterns should be altered and how many people can visit the caves on any given day.

The guided tour through the caves begins at the top level and the Catacombs. This upper area is dry and decorated with the stunning, delicate formations. It’s a gallery of modern art, with formations resembling people, animals and even extraterrestrial beings.

From there, you’ll descend to the second level or Banquet Chamber. This is where early visitors would stop to eat and you can still see evidence of this in the smoke on the ceiling.

The third and final level heads down into the Cathedral, an enclosed area with a height of sixty feet. This is the tallest chamber in the cave. The formations here look like pipe organs and the dome-shaped roof absorbs sound, creating ideal acoustics for singing. Over the years, a number of famous singers and choirs have performed in this space. To demonstrate the sound quality, our guide sang us a Maori love song.