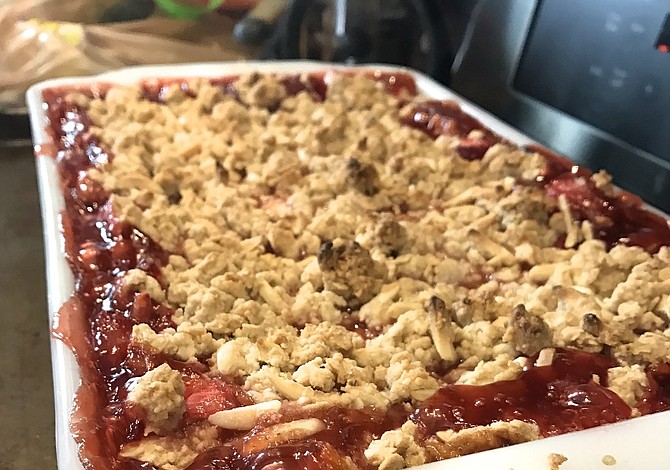 Now is the time to find rhubarb at your local grocery store. Make these yummy desserts with this tart plant.

What plant has leaves as big as elephant ears and ruby red stems that are sour beyond belief? Rhubarb! Despite its poisonous leaves, rhubarb has the nickname “pie plant.” Find rhubarb at your favorite grocery store this time of year. The color of the rhubarb stalk may vary from deep red to speckled pink to pale green, but all the stalks are good to eat.

Cook the stalks in a variety of ways. Stewed, they yield a tart sauce that can be eaten like applesauce, served over ice cream or used as filling for pies, crisps or tarts. If rhubarb is a new food to you, try mixing it with strawberries or apples. Rhubarb is good flavored with grated orange peel, ginger or cinnamon. It makes excellent jam. If you are cooking for one or two people and end up with leftover rhubarb, you can freeze or can it.

My husband’s favorite! You can make this pie using just rhubarb and add strawberries to the mix later in the season when local berries become available. For a luscious pie, use half rhubarb and half blueberry – we call that bluebarb pie. Taste your rhubarb; the earlier it is picked, the sweeter it will be, so you may want to cut down a bit on the sugar the recipe calls for. I buy ready-to-use Pillsbury pie shells, which are quite low in sodium, and one of the few convenience foods I use.

4 cups rhubarb, chopped (or half rhubarb and half sliced strawberries or blueberries)

Heat oven to 425 degrees. Prepare crust following package directions. Stir everything else together, place in pie shell. Cover with top crust. Cut slits in top crust, seal and crimp edges. Sprinkle with cinnamon sugar. Cover edge with 2-inch strips of aluminum foil to prevent excessive browning. Remove foil during the last 15 minutes of baking. Put an aluminum-foil-covered tray in the oven below the pie; it may bubble over. Bake 40-50 minutes or until crust is brown and juice begins to bubble through slits in crust.

[Katy G. Wilkens is a registered dietitian and department head at Northwest Kidney Centers. The National Kidney Foundation Council on Renal Nutrition has honored her with its highest awards: the Susan Knapp Excellence in Education Award and the Joel D. Kopple Award for significant contributions in renal nutrition. See more recipes at www.nwkidney.org.]