Thoughts on the Eve of 50 Years of Marriage 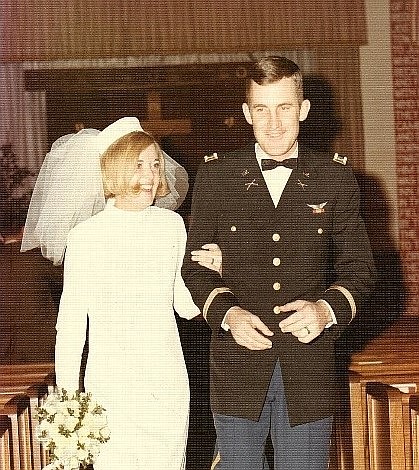 Thoughts on the Eve of 50 Years of Marriage

There are many stories about romances and marriages occurring during and because of military assignments. Our partnership began in that somewhat crowded subject area.

I was a single 25-year-old Army lieutenant attending helicopter flight school in southern Alabama in 1969. A fellow officer had been assigned with me at various locations for a couple of years, and I became close friends with him and his wife. When we all got to Ft. Rucker, Alabama, it just so happened that his wife knew a teacher named Maureen living in the area. A blind date was arranged and the rest is our marital history.

When I graduated from flight school in August, I had orders to Ft. Carson, near Colorado Springs, Colorado, so there I reported, while Maureen went back to teaching. But we missed each other so much that we decided to get married as soon as arrangements could be made—not a simple matter. I had to arrange leave from Ft. Carson, go to Alabama, get married, and get back to Carson for a special assignment, all in a compressed time frame. I also had to take Catholic marriage instruction. Maureen had to terminate her teaching contract in mid-year and arrange facilities for a ceremony at Ft. Rucker. Then there was the matter of inviting family and friends in fairly short order. It was all accomplished by December 30, 1969.

Fifty years later, we find ourselves living in state number ten, close to our son and his family. We have survived my assignment in the Vietnam War, a few difficult family issues, some hard work assignments, a hurricane, some tornadoes, two major surgeries, and other ups and downs. We still love each other and our family very much and have friends all over the United States. Was it fun every single minute of the fifty years? No, but when it wasn’t, we worked at the issue, and made adjustments, making our bond stronger. We look to the future together with considerable optimism and great faith.

Steve Forsythe is a retired wildlife biologist who moved to Edmonds, Washington in 2017.