Prepare to be mesmerized by Monument Valley 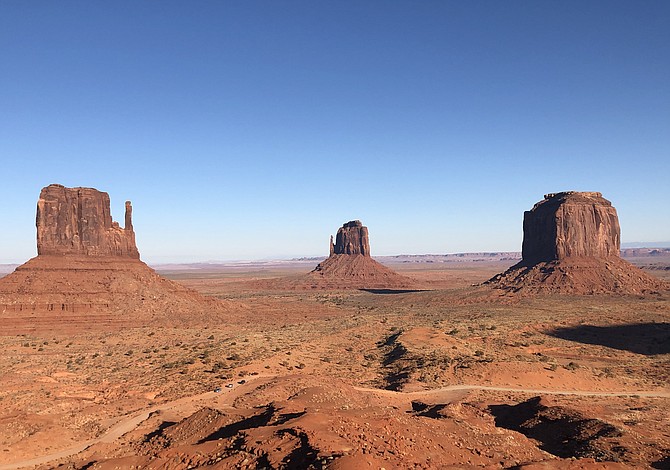 John Wayne was right on the mark when he described Monument Valley as, “God’s Treasure.” The iconic actor was taken with the stark beauty of this majestic place when he first laid eyes on it while filming the movie, “Stagecoach,” back in the late 1930s. Directed by the venerable John Ford, the film made The Duke a star and the western, a respected film genre. Hollywood helped shine the light on this distinctive landscape and it became one of the most recognizable images in the country.

Monument Valley Park (known also by its Navajo or Diné name, Tsé Bii’ Ndzisgaii, which roughly translates to mean Valley of Rocks) comprises a small piece of the semi-autonomous Navajo Nation, the largest Native American territory in the U.S. The park straddles the Utah-Arizona border and occupies nearly 92,000 acres. It is not a national park, however, like nearby Canyonlands in Utah or the Grand Canyon in Arizona, but one of six Navajo-owned tribal parks. And the valley is not a valley in the conventional sense, but rather a wide flat landscape, interrupted by colossal buttes and otherworldly looking creations.

The natural sculptures of Monument Valley are a result of sandstone deposits and the geologic processes of uplift and erosion, transpiring over millions of years. What was once a lowland basin became a plateau and the forces of wind and water cut away at the surface of this mass, chiseling rock formations into the unique shapes that can be seen today.

It’s hard not to be awestruck by these formations and their vivid orange and red hues. Fragile pinnacles of rock are surrounded by miles of dramatic mesas, monoliths and buttes, dwarf shrubs and trees, and sandy, windblown desert. Sandstone masterpieces tower at heights of 400 to 1,000 feet, rising from the earth in an effort to meet the sky. The landscape overwhelms the senses and even the most jaded can’t help but be spellbound by these enduring images of the American West. 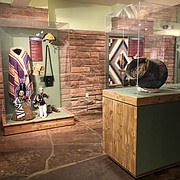 Begin your exploration of the park at the Monument Valley Visitor Center and Museum, Here, you’ll find exhibits that focus not only on the valley, but on the Navajo Nation, its size (a whopping 26,000 square miles), census statistics, government and efforts to keep the Navajo language and traditions alive. Additionally, there’s a section devoted to the Navajo Code Talkers of WWII, who provided the most sophisticated, accurate, fast and secure means of military communications within the Pacific. The code baffled the Japanese and greatly helped win the war in the region. Displays not only detail the history of this communication, but also provide examples of the code and photos of some of the Code Talkers.

Outside the museum, take in the jaw-dropping view of three of the valley’s most photographed peaks – East and West Mitten Buttes and Merrick Butte – from nearby Lookout Point. This will whet your appetite for seeing more of the park, which you can do via the Valley Drive. This seventeen mile dirt road starts at the visitor center and heads southeast among the towering cliffs and mesas. It passes eleven numbered stops at the most scenic locales, including the famed Mittens, which look like two enormous mittens, but yet also signify spiritual beings watching over the valley; Merrick Butte and Mitchell Mesa, named after two ex-cavalry soldiers, who were prospectors searching for silver in the valley; The Three Sisters, which resemble a Catholic nun facing her two students; John Ford’s Point, so designated in honor of the Hollywood director who made several films in the valley; and Totem Pole, a thin, tall spire that provides a good example of what erosion can do to a butte. East of the Totem Pole is Yei Bi Chei, a group of rock formations arranged in a crescent shape to appear like a troupe of elegant dancers.