Can smart speakers act as personal assistants for an aging population? 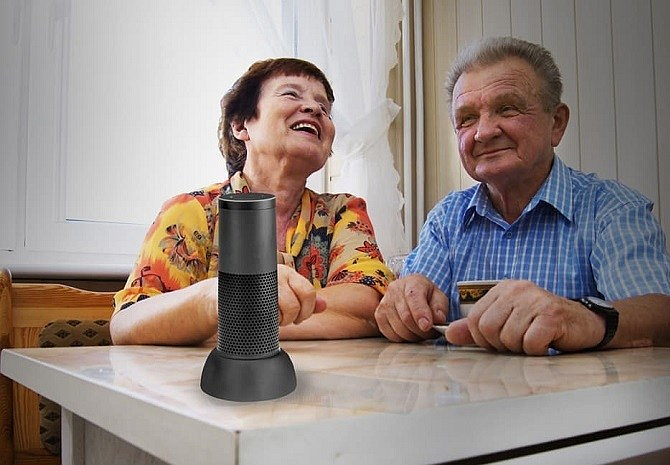 Photo courtesy of Alexa for Seniors

Older adults can be hesitant about new technology. At the same time, many are reluctant to forfeit their independence by moving into an assisted living facility, even if they are having trouble performing tasks at home. Hilaire Thompson and Yong Choi are researchers from the University of Washington School of Nursing. They wanted to know if a technology exists that could help seniors stay independent for longer while lowering the worry of accidents.

Choi hypothesized that smart speakers could be on the list of technologies that encourage independence. Thompson and Choi conducted a study where they asked a group of older adults to choose between four different technologies to try at home, one of which was the Amazon Echo smart speaker. The researchers found that the subjects who tried the Echo started using it to answer basic questions, such as the day’s forecast. After a while of using the speaker, they began asking it more and more complex questions, and even started asking it to do things it couldn’t do. Thompson and Choi reported that some people wanted the speaker to monitor health characteristics like blood pressure and report the information to their doctor.

One woman chose a technology other than the Echo and regretted her choice after an accident. She lived alone and slipped in her bathroom.

If the woman chose the Amazon Echo and linked the device to her phone, she could have shouted at the Echo to call for help. This incident highlights the role smart speaker technology could have in responding to emergencies.


Smart speakers are also helpful assistants for people with sensory issues and can keep them living independently for longer. Mei Liu, a guest on a KUOW podcast, reveals how her Amazon Echo helped her live independently after losing her sight. Liu lost her ability to see after complications with her glaucoma medication. Despite Liu’s blindness, her insurance refused to pay for her to live at an assisted living facility because she was still physically able to live on her own. This left her and her family scratching their heads on who would assist her with daily tasks.

Liu’s daughter decided to introduce her mother to the Amazon Echo after the incident. She was reluctant to try it, but after a while she was using the speaker to time her medications, listen to the news, play games and even write a book. Liu’s view of the Echo quickly went from a silly toy to an in-home aid which kept her out of assisted living.

Older adults can also keep their body and mind healthy as they age with electronic assistants. Smart speakers can be programmed to set reminders for medication or to do an at-home exercise. Smart speakers have a variety of trivia games, including Jeopardy!, to choose from that can stimulate their brains on a regular basis.

Liu said that experimenting with her Amazon Echo is “what keeps my mind from deteriorating.”

Additionally, speakers won’t get tired or frustrated with endless questions from people with dementia. Alexa will just respond in the same chipper voice again and again with the same answer. For people with limited mobility, smart speakers can be set up to adjust lights, thermostats, electrical outlets and door locks with their voice. This function takes care of simple tasks that cause unnecessary pain for them and lightens the load for their caregiver.

For those who are living in an assisted living facility, smart speakers are still a valuable tool. Residents of Front Porch, a retirement community in California, formed “The Alexa Club” to learn from each other about the smart speaker technology and socialize. Kari Olson is the innovation officer for Front Porch. She thinks The Alexa Club is a great example of connecting community through technological support. Whether it’s an individual living on their own reaching out to their family for help or a group of residents at Front Porch troubleshooting their Alexas together, the real value of the smart speakers is the opportunity they create for human connection.

Amazon smart speakers have a few exclusive applications that come in handy. ‘Find My Phone’ will locate that tricky device that always seems to slip in between the couch cushions. ‘Ask MyBuddy’ notifies an emergency contact in the event of an accident. This application could mean the difference between receiving help quickly and crawling around on the ground to find a phone and call for help. This feature is critical for older adults who live independently.

To listen to the KUOW podcast visit https://kuow.org/stories/primed-season-3-episode-2