In the Footsteps of a High School History Teacher 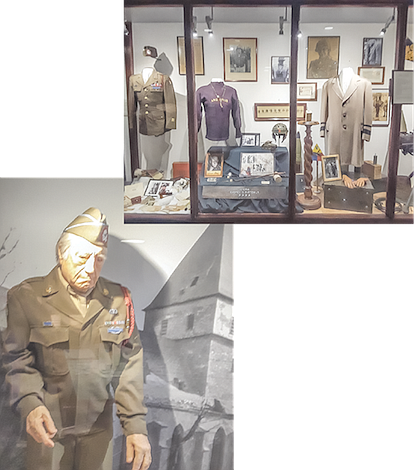 Suzanne was inspired to visit Bastogne, Belgium after reading her high school teacher’s memoir about his time during WWII. She was surprised to find a museum in the town honoring her teacher, Vince Speranza, and his 101st Airborne Division. Pictured are Vince’s memorabilia from his time there, and a wax figure of Vince himself.

It’s been 57 years since I graduated from Staten Island’s Curtis High School, where I could have cared less about history class. When Vince Speranza, a Curtis history teacher and now a friend on Facebook, talked about a memoir he’d written called Nuts! I decided to buy a copy.

“Nuts!” is Brigadier General McAuliffe’s reply to the German Commander who wanted the Americans to surrender during the Battle of the Bulge.

The chapter “Battle at Last” describes Vince and his 501st Parachutist Infantry Regiment, 101st Airborne Division entering a small Belgian town, Bastogne. Through Speranza’s storytelling, I visualized the town surrounded by American soldiers with one mission in mind: to keep the Germans out, preventing them from reaching the important port of Antwerp.

I was suddenly thrown into the Battle of the Bulge, December 1944. For the first time in my life, WWII history became real. 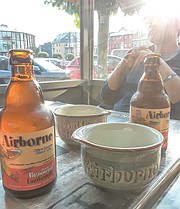 The town of Bastogne created Airborne Beer, which is drunk out of small ceramic helmets, in honor of Vince Speranza.

Vince captivated me with the scene that followed. He went looking for a fellow soldier who had been wounded by enemy fire. He found him on the floor of a church in Bastogne. His friend’s only request was for Vince find him something to drink.

Vince set out through the town and found a badly war-damaged tavern. Making his way through the rubble, he discovered a working beer handle at the bar. Vince filled his helmet and brought it back to his injured friend.

All the injured soldiers in that church wanted a sip. Soon the beer-filled helmet was empty. Vince returned to the bar for a refill but was met coming back at the church doorway by a regimental surgeon, a major.

“What the hell do you think you’re doing soldier?” demanded the major.

“Giving aid and comfort to the wounded, Sir!” Vince replied.

The confrontation ended with the major’s command, “Put on your helmet!”

Ninety-five-year old Vince Speranza, who now lives in Illinois, rightfully earned the Bronze Star, Purple Heart, WWII Victory Medal and French Croix de Guerre. What he didn’t realize was, several years ago the town of Bastogne ran with this “mythical” beer story. Town officials were surprised when Vince returned 65 years later and said the beer story was true. He did provide that “aid and comfort” to the injured soldiers. “Airborne Beer” was created in honor of the 101st Airborne Division.

Vince’s story motivated my family and me to visit Bastogne, Belgium, July 2018, to see firsthand the town Vince fought to save. I saw memorials to WWII’s General George Patton and General Anthony McAuliffe. I was also surprised to find the 101st Airborne Museum. On the first floor, Vince’s jacket, memorabilia and medals are encased behind glass. That was exciting enough. However, when I turned to the right, there he was.

“It’s Vince,” I called to anyone within earshot.

There stood a life-size replica wax figure of the now 95-year-old Vince Speranza, looking more like him than he himself.

Another display showed the Nazi flag Vince and his comrades took as a souvenir from Hitler’s lair at Berchtesgaden.