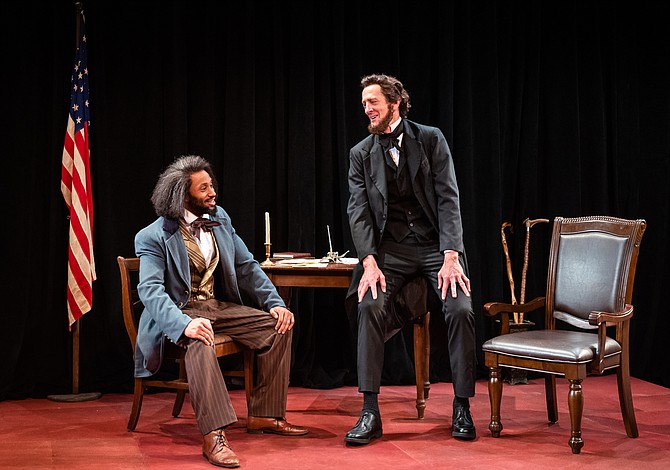 Taproot Theatre’s latest offering, Necessary Sacrifices is a brilliantly thoughtful show that keeps the audience’s attention even though it’s essentially just two men talking. Those two men are important figures in American history - President Abraham Lincoln and former slave and abolitionist Frederick Douglass. Both actors portray the characters with what appears to be great authenticy, but who can really say how authentic they are since there are no recordings from that time.

Still, Taproot’s casting of Ted Rooney as the lanky homespun Lincoln and Lamar Legend as the somewhat combative and formal Douglass is excellent. Fortunately, Taproot also decided to remain true to the story - unlike what I’ve seen in the past couple years at other local theaters - with Lincoln played by a white man and Douglass played by a black man.

The show covers the playwright’s imagining what occurred during two Civil War conversations the men had, and it gets quite personal as Lincoln delves into Douglass’ private life and especially his two sons who are fighting for the Union in the War. As time passes, the audience (and Douglass) see Lincoln as a man forced into making very difficult life and death decisions regarding Civil War strategies and emancipating the slaves. Eventually, both men come to see each other as human because the two actors bring these historical figures to life on stage, which was proven by the standing ovation they received at the conclusion of the show I attended.

Five words were meant to change a young country divided by civil war when abolitionist and Union recruiter Frederick Douglass challenged his president to act on the statement that “all men are created equal.” As these two brilliant Americans wage a battle for the future of the Union, their arguments affect not only their sons but also the nation we live in today.

As the description says, Lincoln wanted and needed Douglass to continue recruiting black soldiers for the Union in order to win the War and maintain the Union. Being a man of great integrity, Douglass was more interested in making sure that any black soldiers he recruited to fight were treated as equals, which at the time was not the case. And therein lies a primary conflict of this story.

All in all, Necessary Sacrifices is a thoughtful, well-presented piece that helps to show us some of the struggles and difficult decisions that have made the United States into the country that it now has become. The show continues at Taproot Theatre through October 26.