Amp up the adventure in Hells Canyon! 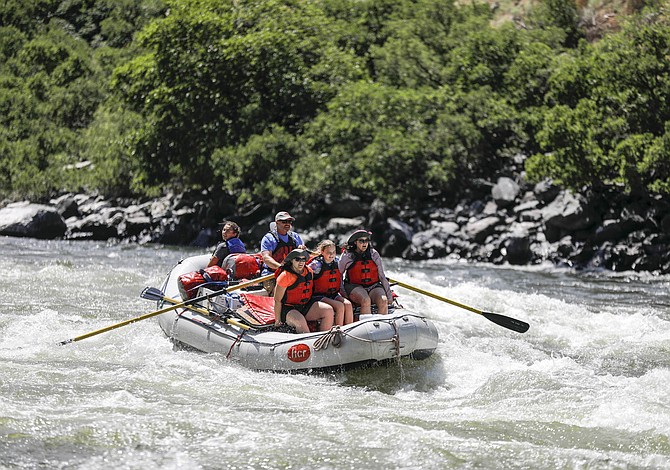 Get ready for some whitewater fun! Photo courtesy of Hells Canyon Raft

Rock aficionados will appreciate that most of the older rocks in the canyon came from underwater volcanoes, formed around 150 million years ago, as a result of tectonic plate movement. Uplifting formed the Seven Devils, while the canyon itself is a result of the processes of uplifting and erosion. Over time, enormous boulders and rock slides have rolled into the river, generating formidable wave action and creating notorious paddle-swallowing holes.

As far as human presence in the area, evidence in the form of Clovis points suggests that people may have lived here as far back as 15,000 years ago. The Nez Perce lay claim to the canyon, regarding it as their ancestral home. According to a tribal legend, the mythical figure, “coyote,” dug Hells Canyon with a big stick to protect the tribe’s ancestors living in the Blue Mountains of Oregon from the “Seven Devils” across the gorge in Idaho.

The first historical record of Hells Canyon is found in the journals of Lewis and Clark, who passed nearby in the fall of 1805 and then again a year later. They had been warned to avoid the canyon by the Native Americans and had carefully skirted it, bypassing it on their outbound exploration. But, on their return journey, snow forced them to camp in the vicinity. Three members of the expedition, looking for a fishery on the Snake River made it to the north end of the canyon. Lewis recorded their impressions of this mountainous country, noting that the rocks of the river banks rose to great heights. Little did he know the true extent of this height.

Ranchers and prospectors started coming to the area in the late 1800s and early 1900s after copper and gold were discovered in the Seven Devils Mining District, on the Idaho side of the Snake River. They began eking out a living in the harsh conditions of this remote wilderness.

Exploring the canyon is like taking a trip back in time. You’ll hike to abandoned homesteads with dilapidated cabins and the remains of old farming equipment, and you’ll also tread Native American trails to view prehistoric pictographs. Thanks to the canyon’s dry air, such evidence of human history has been preserved over the years.

One of the best examples of early pioneering days is Kirkwood Ranch. Though no longer a working ranch, the place is open to the public and includes several structures that help tell the story of ranching in Hells Canyon. One building, the Sterling Cabin, serves as a small visitor center with displays of artifacts and photographs reflecting the history of the area. The center is manned by volunteers, who live on the property for various periods of time. When our group passed through, Chuck Hawkins was in his sixth year of volunteering at the site. He typically spends the month of August at the site, sharing his extensive knowledge of the place with rafters and hikers.