Where in the Sam Hill is the Maryhill Museum? 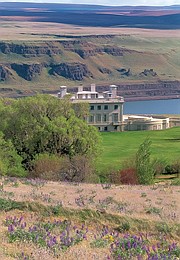 The month of May marks both the anniversary of Sam Hill’s birth and the grand opening of the museum he founded in Goldendale.

The history of the Maryhill Museum of Art is inseparable from the colorful life of its founder, Samuel Hill.

By the early 1900s, Sam Hill was a mover-and-shaker in the Pacific Northwest. He was a globe-trotting entrepreneur, lawyer and railroad executive—and an early advocate of good roads. The noted philanthropist also built monuments to peace and traveled the world promoting trade and prosperity.

Born in 1857 in Deep River, North Carolina, Hill grew up in an abolitionist Quaker family. While still a boy, his family moved to Minneapolis in the tumult following the Civil War. After graduating from Haverford College, with subsequent study at Harvard University, Hill began a successful law practice in his new home town of Minneapolis. During a court battle, Hill caught the eye of the president of the Great Northern Railway and became his trusted advisor and law clerk in 1886. Two years later, Hill married his boss’s oldest daughter, Mary. The two had a daughter, Mary, and a son, James.

While in Minneapolis, Sam Hill became president of the Seattle Gas and Electric Company—owned by Minneapolis investors. During his visits to Seattle, Hill became enamored of the region and in 1899, he moved. His wife and children later joined him but returned to Minneapolis after only six months. His wife never came back, although the children divided their time between parents.

A successful businessman and entrepreneur, Hill quickly became known among the political and social elite of the Northwest. He served as president of the Washington State Good Roads Association and spent much of his life promoting the development of roads throughout the Northwest, as well as lobbying Washington and Oregon legislators for funding. Hill is quoted as saying, “Good roads are more than my hobby; they are my religion.” He felt paved roads would benefit all, including farmers needing easier routes to their markets. Hill’s own road-building experiments included the Maryhill Loops Road, the first macadam paved road in the Northwest.

In 1907, Samuel Hill purchased 5,300 acres of land along the Columbia River with the dream of establishing a Quaker farming community. He formed the Maryhill Land Company, named after his daughter, and set about building a town. The village included a store and post office, a Quaker church, an inn, a blacksmith’s shop and a stable.

In 1914, work began on a hilltop mansion that was to be Hill’s home. But the remote location of Maryhill and the lack of irrigation proved insurmountable obstacles and the land company failed. Construction of Hill’s mansion stopped in 1917. 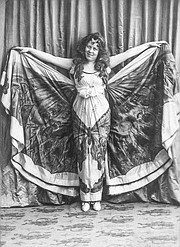 Sam Hill’s friend, modern dance pioneer Loïe Fuller, convinced him to turn Maryhill into an art museum and used her connections to the art world in Paris to donate many items to the museum, photo courtesy of the Maryhill Museum of Art

It was then that a friend of Hill’s—Loïe Fuller, a pioneer of modern dance living in Paris— convinced him to turn his would-be mansion into a museum of art. Fuller’s close association with well-known artists in France helped build the core of the museum’s collection, including the acquisition of more than 80 works by French sculptor Auguste Rodin. Hill also transferred his own art collections to the museum.