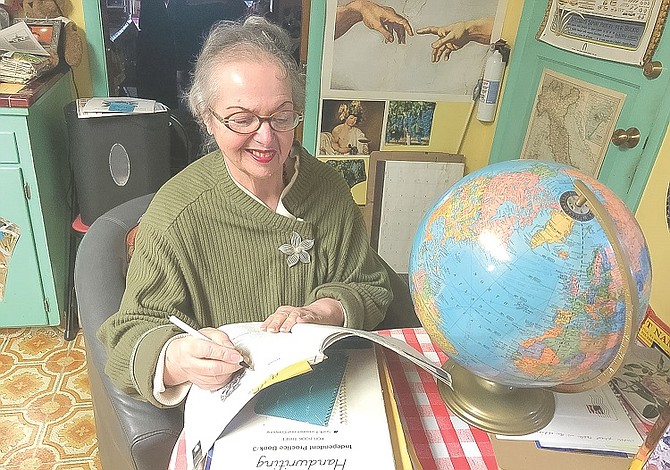 In 2005, it occurred to Dolores Castrilli that so many immigrants had moved into her Beacon Hill neighborhood that she couldn’t talk to her neighbors anymore. “Many of them don’t speak English,” said Castrilli, “and I don’t speak their language.”

With her friendly, chatty manner and nurturing style, she set about to try to bridge the language gap by offering free English lessons out of her home. “I wanted to make a connection, to make friends,” she says, sitting at her kitchen table, flanked by students. “I want to get to know their culture, how they worship.”

For over fourteen years, the retired Castrilli figures that several thousand people have passed through her door—most from Southeast Asia, but also from all over Latin America, former Soviet republics and Africa. Her ‘students’ have ranged in age from 5 to 85. While many are housewives and low-skilled workers, Castrilli boasts she’s had doctors and medical students around her kitchen table, too.

Castrilli does not hold a certificate for teaching English but feels she doesn’t have to because her work is voluntary, and she charges nothing for her services. She requires students to have a basic knowledge of the language so that she can engage them in conversations. “I help them with conversation, vocabulary, grammar,” she says.

On a recent day, Castrilli begins her lesson, speaking slowly, deliberately — careful to enunciate every syllable so that her two students, Kim Loan Nguyen and Hoa Nguyen, unrelated but both from Vietnam, can follow.

Hoa Nguyen, who lives in White Center and has been taking classes for nine months, arrived in the U.S. 14 years ago after spending nearly six years in a Communist-run camp in Vietnam. Kim Loan Nguyen has been in the country about half as long and has been taking lessons off and on for less than a year.

Kim Loan Nguyen begins to read from one of the well-used lesson books Castrilli pulls out, stumbling over many of the words in a short story about going to a restaurant.

She struggles with “restaurant” and other words — repeating them over and over, trying to get them right. “Don’t forget the end of your words,” Castrilli cajoles the students. “I like to mainly focus on pronunciation,” she says. “That’s what they need.”

It’s natural for people to stumble over pronunciations of certain sounds when learning a foreign language, experts say. Part of the struggle, Castrilli has come to realize, is that many of her students are linguistically isolated. They may surround themselves with those from their own cultural groups, shop and get their services from people who speak their native language.

“I tell my students … go to QFC or Safeway instead, go downtown and listen to people speak English,” Castrilli says.

Some of her students want to learn enough English to get their first job or advance in a job they already have, or they want to learn to pass the test for citizenship.

Castrilli began offering English lessons fourteen years ago after strolling in the neighborhood with her son and realizing they couldn’t stop to chat with the people they met. One neighbor she encountered on that walk fourteen years ago — Xiang Deng — still refers to Castrilli as “teacher,” even though she seldom comes for classes. But the two women have remained friends, having spent Thanksgiving together and going out for meals and dim sum.