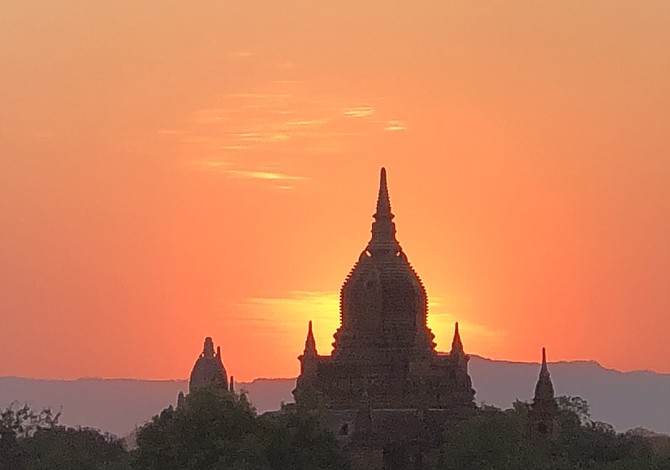 Sunset in Bagan is a dazzling experience. Photo by Debbie Stone

As the sun rises and paints the landscape fiery orange, I finally grasp the sheer magnitude of Bagan’s ancient monuments from my bird’s-eye perch in a hot air balloon. It’s an otherworldly skyline, dotted with pagodas, temples, shrines, stupas and monasteries as far as the eye can see. I marvel at the unrivaled perspective I have of this archaeological paradise and its unbeatable scenery. It’s one of the many memorable experiences embodied in a custom tour of Myanmar (formerly Burma) with top-rated Journeys Within, A Wild Frontiers Company.

Bagan is the sacred mecca of Myanmar. In this “Golden Country,” long shrouded in myth and legend, pilgrims come to the “sea of temples,” prostrating themselves before towering images of the Buddha. They offer donations and whisper mantras, while saffron-robed monks recite prayers in hypnotic monotonal chants.

Religious fervor and sense of spirituality permeates Bagan. And no wonder, as it is home to the largest collection of Buddhist structures in the world, more than 2,200 in number. Originally the capital of the Kingdom of Pagan, the site once contained up to 10,000 temples, with many built between the 11th and 13th centuries. The kingdom was the first to unify the regions that would later comprise modern Myanmar, and helped to establish Burmese culture and ethnicity. It also embraced Theravada Buddhism with a zeal that is still very apparent across the country today.

Theravada is one of three main branches of Buddhism, which originated in northern India and Nepal before spreading across Southeast Asia. It emphasizes discipline and self-control as a means to ridding oneself of attachment to all material things, a necessary step on the pathway to enlightenment.

In its heyday, the kingdom had a population that equaled or exceeded many European cities. It was a center of learning, attracting monks and scholars from around Asia, who came to study law, medicine, philosophy and astrology. This thriving period also saw rise to an intense building boom. The people believed that good karma and a more favorable reincarnation could be acquired through the construction of temples and pagodas. And the bigger, the better, with giant, bell-shaped stupas and grand, soaring spires. The dazzling skyline impressed Marco Polo, who wrote that it “made one of the finest sights in the world.”

Interestingly, the rise of Bagan occurred at almost the same time as that of the famed complex of Angkor Wat in Cambodia. While the latter became a major tourist magnet, Bagan, however, remained hidden to the outside world. Gradually, though, as the country opened its doors to visitors, this important historical landmark has landed on more travelers’ bucket lists.

The Bagan Archaeological Zone in Old Bagan measures 26 square miles and is located on the vast, arid plain of the Irrawaddy River. With a span of this size, the site is difficult to see on foot, but there are plenty of other ways to discover its treasures. You can cycle on the various gravel roads and paths, use a motorbike, hire a guide to show you around, or hop on a horse cart. The latter offers the opportunity to experience the monuments at a languid pace, from the seat of a more traditional mode of transportation. Opt for an early morning or late afternoon ride when the temples are cast in an ethereal light.