Get inspired with a visit to O'Keeffe country 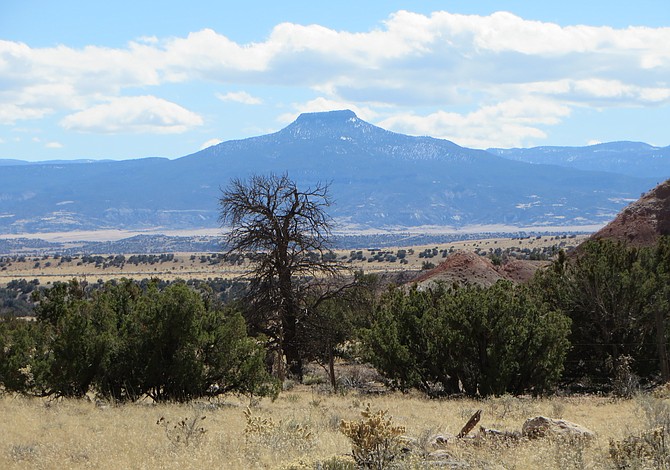 Georgia O’Keeffe is synonymous with New Mexico. The famed artist spent the last forty years of her life living in the Land of Enchantment. She painted its dramatic landscapes and iconic formations in her own unique style. Regarded as one of the most significant artists of the 20th century, O’Keeffe’s work is treasured worldwide. And people from all across the globe travel to New Mexico to see the place that offered her so much inspiration. For many, the trip is a pilgrimage, made in homage to the great American modernist.

Among the works in the museum are O'Keeffe's large scale depictions of flowers. Photo by Debbie Stone

A major destination for visitors is the Georgia O’Keeffe Museum in Santa Fe. The museum, which is dedicated to the artistic legacy of O’Keeffe, her life and American modernism, opened in 1997, eleven years after the artists passed away at the ripe old age of 98. Its collection of over 3,000 works by O’Keeffe spans from 1901 to 1984. As you tour the museum, you’ll not only get insight into the artist’s paintings, but also into her creative process and the light, colors and shapes of the land that stirred her soul.

A selection of O’Keeffe’s paintings, drawings, pastels and watercolors, representing each decade of her life, are on display within the museum’s nine galleries. Included are her well-known large-scale depictions of flowers, along with bones, leaves, rocks, shells and various other natural forms, New York cityscapes, northern New Mexico landscapes and architectural elements and works inspired from her travels around the world.

Those interested in seeing where O’Keeffe lived and worked can tour her home and studio in the village of Abiquiu, about an hour northwest of Santa Fe. When O’Keeffe bought the place in 1945, it was in ruins, but the location on the edge of a mesa was spectacular. Plus, she would be able to have a garden, something she dearly desired. Over the next three years, the artist worked with her friend, Maria Chabot, to renovate the property.

Today, the house remains in much the same condition as O’Keeffe left it in 1984. Furnishings and décor are simple and large windows in her studio and bedroom open out to nature. You’ll see many specimens from the artist’s collection of desert treasures, such as rocks and skulls, on window ledges and other surfaces. And in the pantry and kitchen are the plain bowls and utensils she used each day, as well as the special tea she so enjoyed.

Make sure to look for the black door through the patio of this adobe dwelling. It was another one of the reasons O’Keeffe bought the house. Over the years, she painted the door more than twenty times, in various renditions. She also drew inspiration from the picturesque view she had of the cottonwood trees below and the road that curved through the valley.

Further up the road lies Ghost Ranch, where O’Keeffe’s other home is located. Though the house is closed to the public, the ranch itself is open to visitors. Now an education and retreat center, the property is also a mecca for aficionados of the artist, who go to soak up the magnificent, multilayered cliff walls, red hills and mesas that are featured in her work. It’s hard not to miss Pedernal, the flat-topped mountain to the south, which was probably her favorite subject.