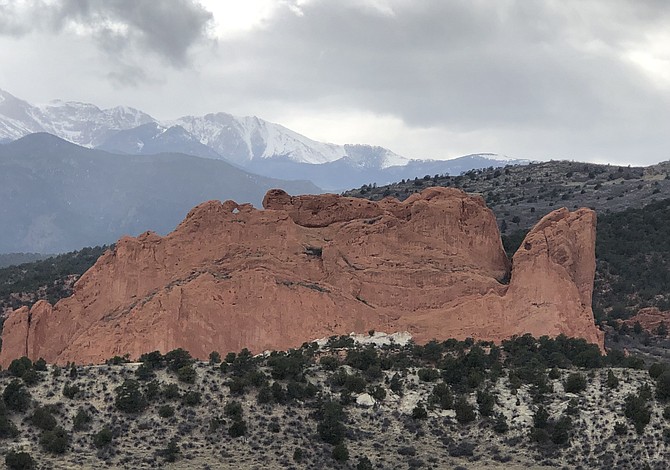 When you’re ready to explore your surroundings, head to nearby Garden of the Gods. Considered a holy place by the Native Americans, this enchanting paradise is a registered National Natural Landmark. Stop in at the visitor center and museum to learn more about the history and geology of the place via a series of interactive exhibits and an informative movie.

The land that the Garden of the Gods sits on was once owned by Charles Elliott Perkins, the head of the Burlington Railroad, who originally bought it for a summer home in 1879. He later added to the property, but never built on it, opting to leave the place in its natural state for the enjoyment of the public. Perkins passed away in 1907 before taking measures to establish the land as a public park, though it had been open to the public for years. Two years later, his children, well-aware of their father’s feeling for the Garden of the Gods, gave the four hundred eighty acres to the City of Colorado Springs. Per their gift, the park remains free to the public.

As to the park’s name, story has it that two surveyors came upon the towering sandstone formations back in 1859. Upon seeing the place, one declared it would make a great spot for a beer garden. The other said it was the perfect spot for gods to assemble, and deemed it the Garden of the Gods. An apt descriptor, the name stuck through the ages.

Though you can drive through the park and marvel at the landscape, the best way to explore it is to get out of your car and hike. There are fifteen miles of trails, easy to moderate, that will give you the feeling of being among the rocks, while also providing opportunities for expansive views. Some of the formations have monikers, like Siamese Twins, Kissing Camels, Balanced Rock and Sleeping Giant. You might see technical rock climbers ascending some of these spires. Watch in awe, but restrain any urge to try scaling one of these behemoths on your own unless you have a permit. Scrambling is illegal in the park. 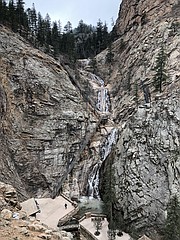 Another scenic hot spot in Colorado Springs is The Broadmoor Seven Falls. This geological wonder of seven distinct falls cascading down between steep canyon walls is on National Geographic’s list of International Waterfalls. After parking remotely at a lot several miles away, visitors are shuttled to the entrance site. From there, you can walk to the falls or hop on another shuttle. Once you arrive at the base of the falls, there are several options. If you want some exercise, climb the 224 steps to the top, pausing to catch your breath to look at each of the falls and the views you get from each juncture. You’ll be well-rewarded for your effort. Then you can turn around and go back down or continue your journey by hiking the trails to Midnight Falls and/or Inspiration Point.

Double your exercise fun and climb the 185 steps to the Eagle’s Nest observation platform for another perspective of the falls and surrounding scenery. If you’re not a fan of an outdoor StairMaster, ride the in-mountain elevator to the platform. The elevator travels up a shaft that was mined out of the solid rock of the mountain. And the tunnel leading into the mountain to the elevator is lined with interesting exhibits that are worth taking the time to see. I ended up doing the stairs and also riding the elevator, as there’s something about taking an elevator for several hundred feet up through a mountain that sounded too unique to pass up.